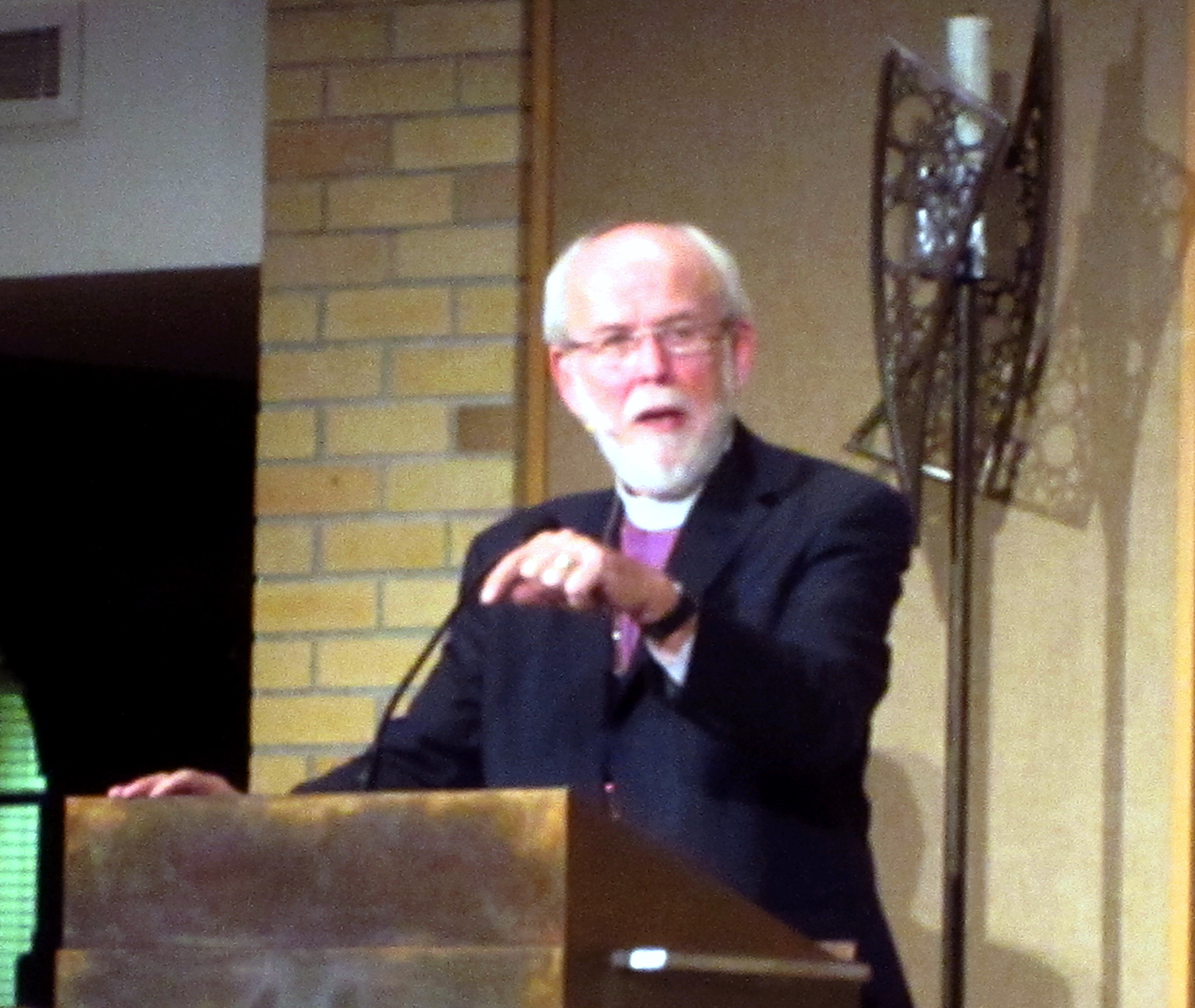 Mark Hanson, presiding bishop of the Evangelical Lutheran Church of America, visited Concordia on Oct. 16 and engaged the community in discussion on what it means to be a college of the church.

As bishop of the ELCA, Hanson serves as a shepherd or head of the church, leading and pastoring churches of the ELCA.

“(Hanson’s position) is a call to be present in all of these places,” said campus pastor Elly McHan. “To be…that physical presence of the person that people can ask questions of.”

Hanson has served as presiding bishop since 2001, and was president of the Lutheran World Federation from 2003 to 2010. Both of these positions have allowed him the opportunity to interact with leaders of religions worldwide, including King Abdullah II of Jordan.

It is for these reasons that President Craft thought it important for Hanson to visit Concordia’s campus.

“We’re one of 26 ELCA colleges in the U.S.,” Craft said. “It’s a tremendous opportunity…to sit down with the leader of our church and talk about the ways we can work together in mutual ministry and service.”

Craft emphasized that Hanson’s work as both a leader in the Lutheran church and on a global level correlate with the three main points of the college’s newly approved strategic plan: establishing a whole self, whole life, and whole world.

“(The bishop) is very keen on interfaith and inter-religious dialogues,” Craft said. “(It is important to understand) what it means to be deeply rooted in our own tradition, and yet in serious, sustained, grown-up dialogue of different traditions.”

The bishop and his wife, Ione, began some of these conversations at Concordia during breakfast with a diverse group of students. After taking suggestions on how to increase his retweets on Twitter, Hanson cited a study released Oct. 8 by the Pew Forum on Religion and Public Life. It reported that one in five American adults do not have a religious affiliation.

The students at the breakfast agreed it might have a lot to do with how the question was posed. Since Eboo Patel’s visit to campus the first week of this semester, Concordia has been very involved with the idea of interfaith dialogue. Hanson emphasized that this is something to be continued. Pluralism, he said, can enrich our relationships with one another.

Craft said Concordia has the perfect opportunity to engage in this.

“Fargo-Moorhead, despite what you might think from watching the Cohen brothers movie,” Craft said, “is an increasingly diverse place.”

And he is right. Hanson ended his day at Concordia with a public presentation in front of an audience composed of both inter-faith and intra-faith members. During this, he shared with the audience what his typical cab ride consists of. With many cab drivers from non-American backgrounds, Hanson engages them in two questions: where were you born and what brought you to the U.S., assuming they were not from America.

He said these types of conversations bring about a deeper respect and knowledge for one another’s background and lifestyle. Similar to interfaith dialogues, one seeks to learn about others and the rich differences between neighbors. Converting someone to one’s own religion is not the motivation for those discussions, he said.

Hanson asked the audience to participate in an activity. Hanson gave two minutes to do the following:

“Summarize what is non-negotiable in you in your faith, so core to who you are in your faith that you would never give it away for the sake of the greater harmony with persons of other religious traditions.”

This question extends past religion, digging deeper into one’s fundamental values and beliefs. After the initial shock, those present began to seriously reflect on what they believe to be non-negotiable in their lives.

“Incarnation. The word incarnate in Jesus but also in the sense of we are the church, the people of the church,” McHan said.

Resurrection and community, McHan said, are also important, as they highlight the deep-rootedness of joining together and becoming the full embodiment of what these mean.

Craft had a different response: love.

“We are loved by God,” Craft said. “The love of God does not constrain us, but rather sets us free to do what is good for ourselves and for the sake of our neighbor.”

Sophomore Michaela Read, who attended the Bishop’s evening presentation, shared her observation from the activity.

“No matter what people’s religions are, they’re going to say something similar,” she said.

“Unity is always in diversity,” he said.