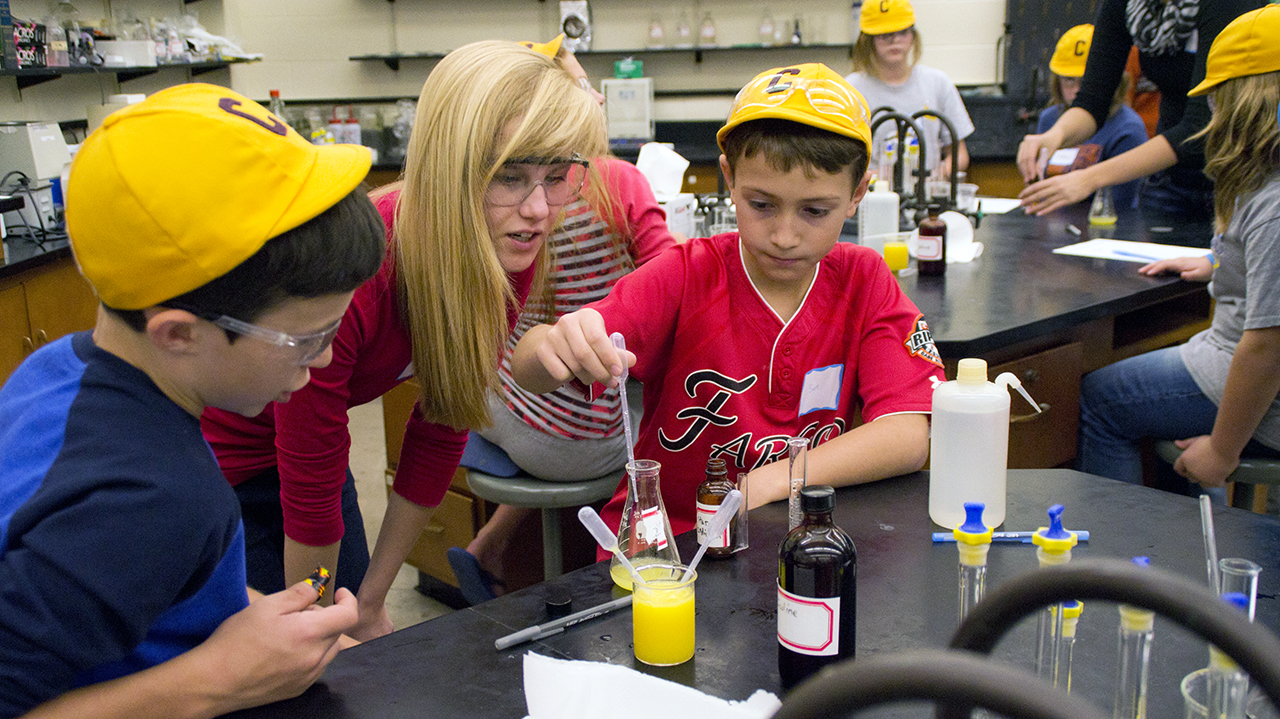 It sounds like college versus fifth grade, but it isn’t. It is the syllabus for Barb Witteman’s inquiry seminar, titled Friendship. Her students are spending their semester learning about and forming friendships with fifth-graders from Washington Elementary School in Fargo. So really, it is more like college meets fifth grade.

This aspect of the class is also one of student Marina Frestedt-Latourelle’s favorite parts.

“I just really like…getting chances to work at a college level on not necessarily the cookie-cutter college material,” she said.

The class has learned that a 100-page children’s book like “Bridge to Terebithia” can have as many as eight different themes running through it.

By doing so, each of Witteman’s students has a buddy in Arneson’s class. They are pen pals with the buddy and also help them with their communication skills, especially writing. Arneson appreciates what the experience can offer to his students.

“[I hope students will get] some help with their writing skills and to be[come] effective communicators with older people,” he said.

Throughout the semester they will exchange eight letters and visit each other three times. They also email frequently.

The most recent visit involved the fifth graders coming to campus. They visited signature campus locations like Ole and Lena, Chocolate Man, and Prexy’s Pond. They also experienced dining in DS and participated in Science Academy. Science Academy is an outreach program at Concordia whose purpose is to interactively share the world of science with elementary-age kids.

The fifth-graders really enjoy their relationship with the Concordia students. Arneson said that they are disappointed if they have to wait for letters and emails.

Another major goal of Witteman’s is to build her own students’ communication. She is concerned that communication is a dying art, which has repercussions for forming quality friendships.

“If [people] don’t know how to communicate, they don’t look for a lasting relationship,” she said.

Heather Beaner, a student in the class, has watched her own communication skills improve. The relationship with her fifth grade buddy has forced her to think about appropriate communication for the setting.

“You don’t talk about the same things you talk about with your college student friends with your fifth graders,” Beaner said. “You have to take into consideration people’s age and their maturity…and what they like to talk about.”

What Witteman’s students talk about with their buddy runs the gamut. Everything from soccer to books to siblings to music gets discussed.

“I typically ask him every time how he is liking fifth grade,” said Jacobson. “He seems to enjoy it.”

Through friendship building, the students have learned from their buddies as well.

Jacobson has learned it can take awhile to build a relationship because some people take longer to open up.

Frestedt-Latourelle’s buddy has taught her about different levels of learning. She finds this perspective especially valuable as she plans on becoming an elementary teacher.

In fact, the experience as a whole has been significant to Frestedt-Latourelle.

“It…reinforced that I want to be a teacher,” she said.

Building strong connections with the students is also important to the students. Witteman anticipated this. In fact, it was part of the inspiration for the buddy element of the seminar.

“I realized a lot of first year students have little brothers and sisters at home and they miss them,” she said.

The seminar will help them retain a relationship with someone that may be similar in age to their siblings at home.

Frestedt-Latourelle expressed appreciation for this project. She has missed having a connection with someone younger since the two boys she used to babysit moved away.

Jacobson really values his relationship with his buddy, as well, and definitely plans to continue building it past this semester.

“I feel like he’s shown me a lot of different points of views on life and I hope that I’m someone he looks up to,” Jacobson said. “I want to…continue to be a role model in his life.”