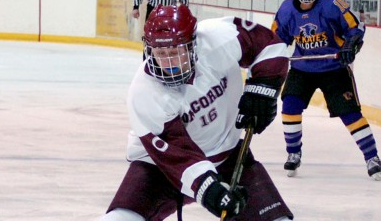 Concordia’s wrestling team has placed in the top 15 teams in the country the last three years, wrestling coach Matt Nagel said.  The team has two all-American wrestlers and several starters returning to the team this season.

In addition to having athletes with years of experience, the wrestling coaches have several athletes of different weight classes to choose starters from based on their performances in tryouts, head coach Clay Nagel said.

This season’s schedule will be a challenge for the wrestling team, Nagel said, but the competition is welcome.

“Our goal is for our guys to be all-American and to do that you have to have stiff competition,” he said.

Men’s basketball coach Rich Glas views the start of this season as a time that the team can work on really improving their performance.  This season, the team has several returning upperclassmen and some younger players who Glas will expect to demonstrate their abilities, he said.

“I like the potential of our team,” Glas said.

During the first few weeks of practice, Glas has been able to strategically placed players in positions that will make them the most beneficial to the team, he said.

The men’s basketball team will play North Dakota State University in their first game of the season on Nov. 1 at NDSU.

The men’s hockey team is beginning this season with several new players.  Nine freshmen and three transfer students have replaced the seniors that graduated last spring.

Howe said that having student support at hockey games is very important to the team.

“Our student body is so important to our success, and we’ve had so much support over the years,” he said.

Initial predictions about the MIAC tell the team that every game this season will be important for their performance overall.  The hockey teams in the conference are evenly matched which won’t allow for any shutouts, Howe said.

Last weekend, the men’s hockey team competed in the MIAC showcase in Blaine, Minn.  The first game against Gustavus was a loss for the Cobbers, 5-1.  However, the team tied with Hamline in the second game of the showcase, 5-5.  They will have their first home game on Nov. 2 against St. Thomas.

In early October, the women’s basketball team started preparing for this year’s season.  Head coach Jessica Rahman said that the team has several key players returning this season and the team has improved since last year.

The team will begin a tough schedule in the MIAC with their first game on Nov. 15 against University of Minnesota-Morris.  Looking ahead, the Cobbers will be challenged this season and will have to make every game count, Rahman said.

Travelling is a large aspect of the basketball season.  The team will play each team in their schedule twice–one home game and one away game.  Rahman has confidence in the team’s ability to play just as well at other schools.

“We typically are a good road team,” she said.  “We strive for consistency.”

The women’s hockey team faces an “atypical” season, head coach Brett Bruininks said.  The Cobbers’ schedule, mandated by the MIAC, will have the team on the road for 16 out of 24 games this season.

Despite this change from last year, Bruininks is confident in the team’s ability to perform at other locations.

“Our kids are so adaptable,” Bruininks said.

He added that the team will focus on mentally preparing themselves for away games so that they can play to the best of their ability and not let unfamiliar surroundings be an issue.

Other teams in the MIAC have Concordia’s women on their radars after last season’s successes and the conference has improved overall since last year; however, the Cobbers will combat these challenges with strong team leadership and talented athletes in all positions, Bruininks said.

With a mix of young members and some returning upperclassmen, the swimming and diving team enters this year’s season.  Head coach Julie Lucier predicts that this season the Cobbers’ competition will be similar to years past.

“It’s a pretty typical season with a pretty good mix of different levels of competitors,” she said.

A large number of freshmen and sophomores makes this season’s swimming and diving team rather young, but Lucier said that the team is balanced with a mix of strong athletes competing in different strokes.

Lucier and the swimming and diving team will be looking ahead to and preparing for the MIAC championship meets held in February at the end of the season.