By: Jordan Elton
In: Campus, Featured, News
Tagged: Concordia Theater, Into the Woods, musical
With: 0 Comments 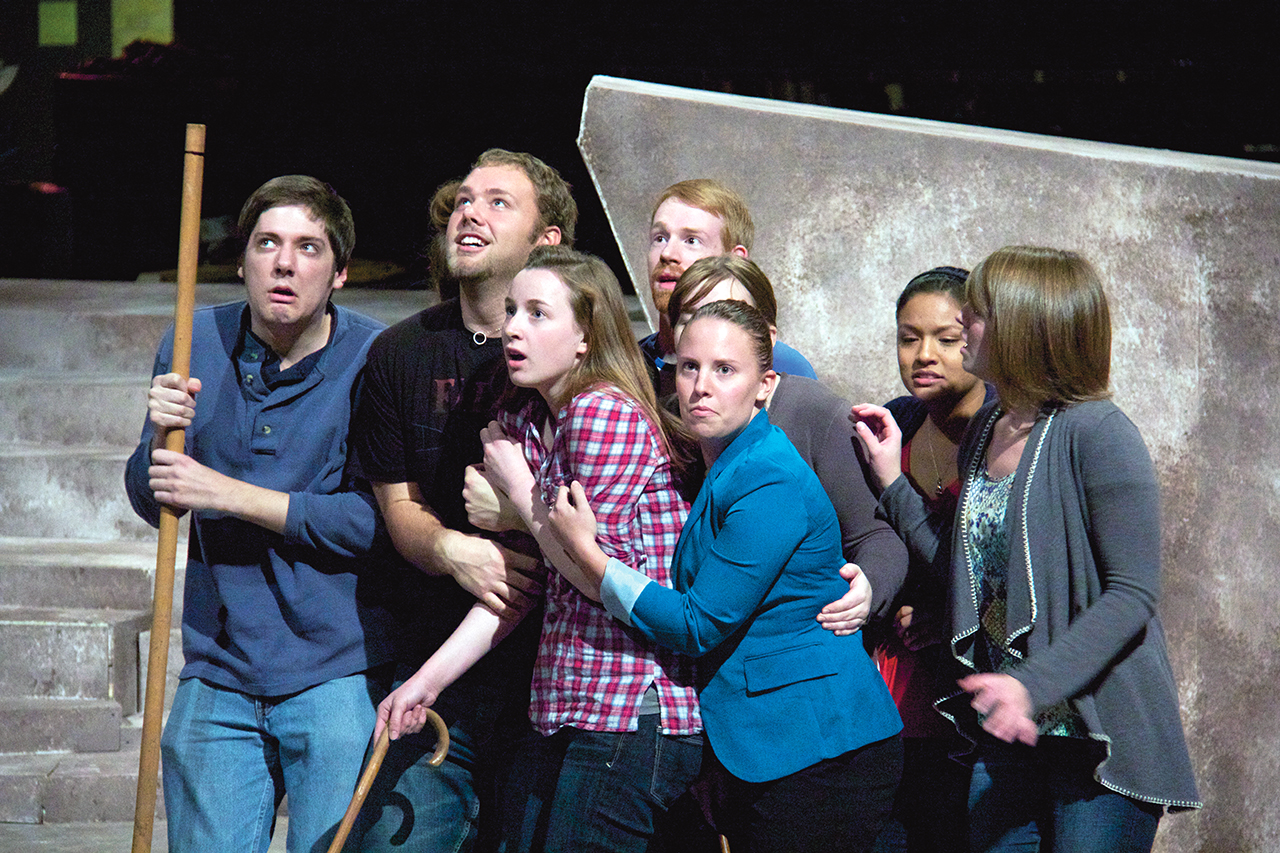 Concordia’s decision to put the musical, “Into the Woods”, onto its main stage this fall has been a dream come true for many members of the Cobber theater community.

Based off of six well-known fairytales, “Into the Woods” connects the different tales through a traditional story of a baker and his wife that have been put under a curse. In order to break the curse, they must collect items from the characters. However, it is when the giant gets involved that the story takes a dark twist.

“The traditional tale is there,” said Jen Thomas, communications professor at Concordia and director of “Into the Woods.” “But there’s also sort of that dark edge to it too.”

According to Thomas, the dark edge comes to life on stage through the specific visual design.

“The design concept for the show makes it a little edgier and a little less cartoony in that the designers are working in a Tim Burton-esque style, with color palette and visual lines,” Thomas said. “It pulls it away from animation or sort of that overly cutesy idea of Cinderella or Rapunzel.”

Thomas said this is a musical she has always wanted to direct, and this fall seemed like a perfect time to make that happen.

“The music department has been itching to do a (Stephen) Sondheim for quite a while,” Thomas said. “With the growth that (the music and theatre departments) have done in collaborating together in the last few years, it’s the opportune time to take on a Sondheim.”

Sondheim, writer of “Into the Woods”, has a reputation for creating complex shows. Thomas said they require a lot of musical skill and talent, which Concordia can provide.

The complexity goes beyond the musical aspect as well. Russell Wustenberg, senior and cast as Rapunzel’s prince, said that Sondheim’s productions are about transformation.

“It’s about the change inside of us as we go through time,” he said.

Whereas many plays give you small snapshots of interactions, said Wustenberg, changes are intertwined throughout this story. You have to adapt with each of the characters without getting hung up on just one, he said.

The cast fits the theme of the play. Thomas said the diverse group of students cast in this production has been “great for campus.” Between the 24 members, all five choirs are represented, as well as students ranging from first-years to senior theatre scholars.

Wustenberg is experiencing his first production at Concordia. Although a vocal music performance major, Wustenberg has only performed in the Fargo-Moorhead opera during his time here–never a Concordia production.

Freshman Jonathan Wells, who plays the narrator, is also in his first show. While it was intimidating at first, he said the play has allowed him to make many more connections than he would have otherwise been able to make and that a highlight has been working with such dedicated cast members.

Sophomore Devan Luth, who is playing Cinderella, is in her second production here. Although a communications major and psychology minor, Luth said she has always been a “theatre kid at heart.” Being involved in the theatre department as an extracurricular has allowed her to pick her passions, but also choose a different career choice.

Luth said playing the role of Cinderella has been a dream come true. She remembers dreaming of having a bigger part as a young girl.

And whether or not dark musical fairytales suit you, Wells said not to worry.

“(The audience) is in for more than just your normal fairytale,” she said.