Cobber Nation gets in on hockey action 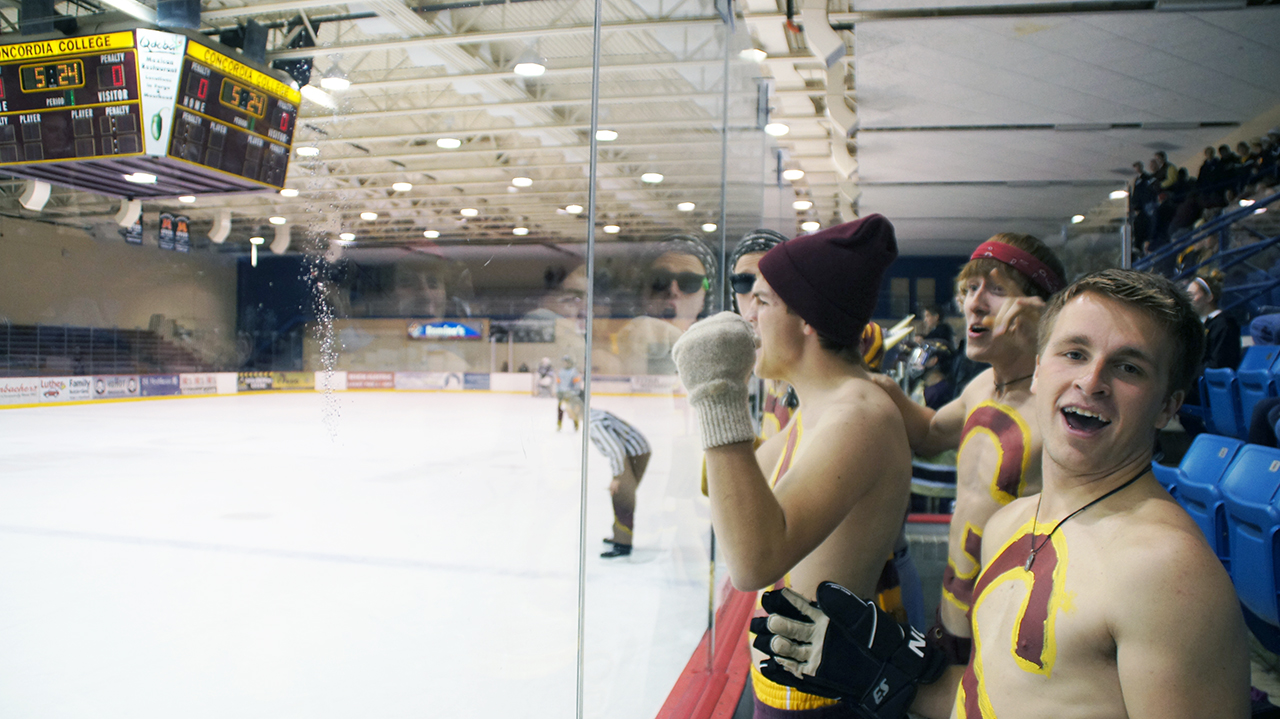 With painted chests and impressive outdoor voices, the men of Cobber Nation have led Concordia students in cheering on our athletic teams since 2004.  At a football game, Cobber Nation can be seen leading the student section in cheers, doing recaps of plays, and even counting off Concordia’s score in push-ups.  This year, Cobber Nation’s boundaries will expand to encompass men’s hockey too.

Support from fellow students can help the hockey team play better, men’s coach Chris Howe said.  Having Cobber Nation at the games will get students more excited and show the team support.

Last year, Howe distributed a flyer encouraging students to attend hockey games.  In the flyer, he directly addressed Cobber Nation saying he wanted the “guys who paint their chests and cheer at football games” to come to hockey games.

As a former hockey player, Erickson is able to relate to the way student support can influence the team’s performance.

“The more of a fan section you have, the better you feel on the ice,” he said.

Other members of Cobber Nation agree that their presence and the enthusiasm they inspire in student fans can have an impact on Concordia’s athletic teams.

“I think having Cobber Nation there really motivates the players to try even harder and to put more effort in it,” President Erik Thompson said.

Currently, Cobber Nation plans to attend men’s home hockey games, but Erickson said they would like to go to women’s hockey games as well.

Cobber Nation and other athletic teams brought a supportive crowd with them to the season home opener on Nov. 2, Howe said.

“The fan support was the best we’ve ever had,” he said.

Cobber Nation led fans in cheering Concordia’s hockey team to their 3-1 victory against St. Thomas.  Howe said that his players “really rallied around the crowd” and felt support from the student fan section.

Howe said that the hockey team felt proud to have so much support from fellow students.

“[Concordia’s fan base] is by far the best in the league,” he said.

One goal of Cobber Nation is to make Concordia’s athletes feel supported.  It helps the teams “to know they have fellow Cobbers there to support them,” Thompson said.

“We love to have the opportunity to honor [the teams],” he added.

Howe said he is looking forward to seeing how Cobber Nation will affect student attendance of hockey games this season and how “students from all walks of Cobber life” will discover how much fun hockey games can be.

“I don’t just want sport fans [at the games], I want everybody,” he said.

The men’s hockey team will play St. Olaf in their first conference game of the season on Friday night at 7 p.m.  Although St. Olaf’s hockey team is looking good this year, Howe doesn’t seem concerned.

“We got a pretty dang good team,” he said.