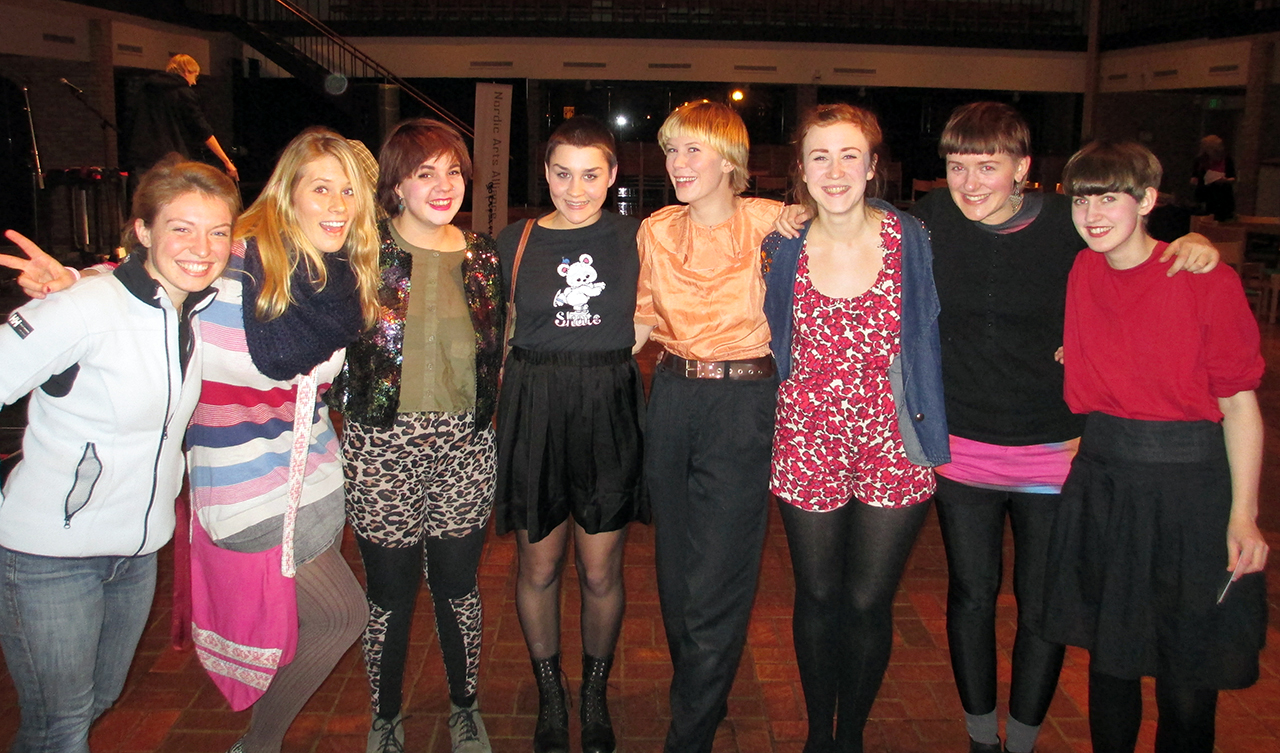 Concordia College is very proud of its Scandinavian heritage. On Saturday, Nov. 3, the college was able to express this Scandinavian pride by inviting Kraa, a Swedish band to perform on campus.

In conjunction with the Nordic Arts Alliance and the Scandinavian Studies department, the six talented ladies that make up Kraa graced the audience with a set of songs in the Centrum.

The college is just one of the stops in the band’s North Dakota and Minnesota tour; they have already performed at New York Mills Regional Cultural Center and Minnesota State University – Moorhead.

The all-girl band, which has been together for the past eight years, is made up of guitarist Salka Hellbacka, drummer Fanny Rapp, bassist Maria Horn, violinists Marta Forsberg and Sara Parkman and pianist Agnes Kagstrom.

Posters around campus described them as a Swedish Folk band but, on Saturday, the band played an eclectic set of music. The band members explained that their music does not fit neatly into one genre.

“Our music is a fusion of all of our music styles,” Horn said. “Some years ago we played more Swedish folk music and some pop and rock.”

Kagstrom added, “It is kind of a mix. All the styles we have studied can be found in our music.”

The different genres of music studied by these women include jazz, folk and classical music.

Despite their differences in musical styles, the band, according to Parkman, listens to a lot of Eastern European music as well as the Icelandic band Sigur Rós.

The thing that has kept the band grounded and together for the past eight years is their strong desire to create their own music.

“Our inspiration has changed over the years but we have always wanted to create our own music,” Forsberg said.

Hellbacka explained that many of the band’s songs have stories behind them. An example of one of these songs is a war song, which was performed in the Centrum. Although a majority of the songs performed were mainly instrumental, this song had the most vocals.

“This song is about breaking away from the norm, which is common in Western culture,” Forsberg said.

In addition, fellow violinist Parkman said, “The song is saying do what you want to do.”

The concert was very interactive. Before each song was performed, Forsberg and Parkman translated the titles of the songs and gave the audience some details about their lyrics – especially those in Swedish. The energetic band danced around the stage with their instruments, keeping the concert lively.

At the beginning of the concert, chairs were arranged around round tables in the Centrum. But, before the first song ended, a majority of the audience was inspired by the excited band and moved their seats away from the tables and closer to the stage.

The members of Kraa have all been impressed with their tour so far and credit their audience for the success.

“People have been really good listeners so we are really grateful,” Forsberg said.

Kraa’s time on campus involved more than just a performance, however. They had to teach as well, which was a first for them.

“We had a master class with the Norwegian language class,” Hellbacka said. “It was something that we have never done before and it gave us the chance to reflect.”

Kraa, whose music can be found on Spotify, have one more stop on their tour; they will be performing at the roller derby at the Fargo Civic Center on Nov. 10.

At the end of the day, the band agrees that they hope their music affects their audiences.

“We want people to just feel something,” Forsberg said. “Happiness, anger, confusion, anything.”