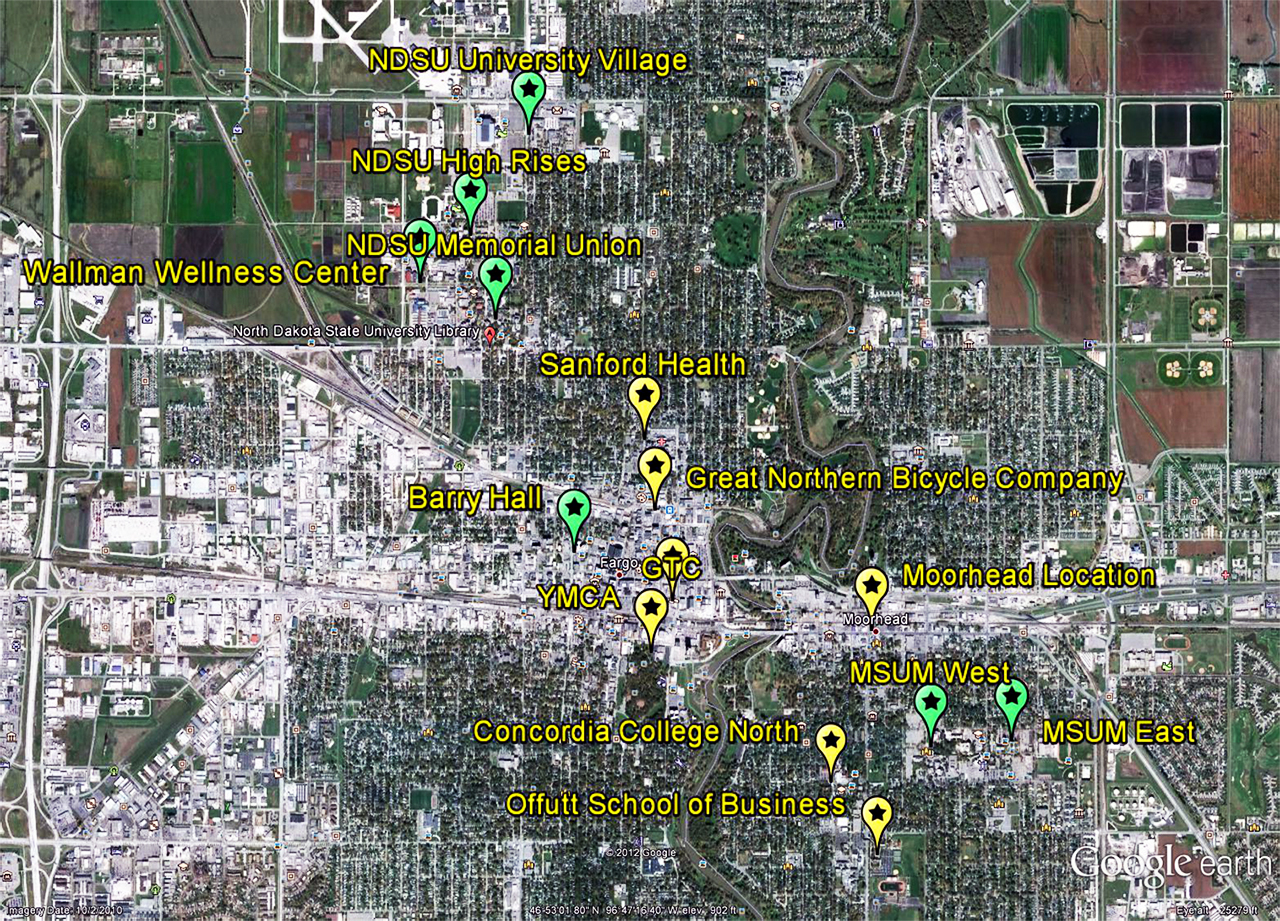 Imagine being able to walk out of your dorm room, hop on a bike and go to Dairy Queen whenever you want.

No bike? Soon, that may not be a problem.

Students from North Dakota State University, Concordia College and Minnesota State University Moorhead are working with city leaders to bring a bike-share program to the Fargo-Moorhead area. Cam Knutson, former student body president of NSDU, started researching in the fall of 2011, and the initiative has spread to the other two campuses since then.

The group held a meeting Nov. 27 with Lee Jones, a representative from the company B-cycle, and Mike Williams, Fargo city commissioner, to discuss the program and possible action plans. As of right now, both Fargo and Moorhead are in the process of creating bike lanes on the roads to improve rider safety.

The bike-share would allow riders to check out bicycles from a rack and then use them for a set period of time before returning them to another rack.

Progress on implementing the bike-share system itself is also in the works. Knutson and others have been working with local companies to request sponsorship for the program, which has an upfront cost of about $35,000 per bike station. This includes the costs of the station itself, which has numerous technologies built in, and the bikes.

The group hopes to get sponsors to cover 65 percent of the upfront cost, and they are close to agreements with several potential sponsors. However, this would still leave a cost of about $14,000 per bike rack. According to Knutson’s proposal, Concordia would have two racks. Kristin Brethova, sustainability coordinator at Concordia, said that she expects the college will be able to come up with this cost.

“I feel pretty confident that if the students wanted this and were willing to support it in their activity fee, then I don’t think it would be a problem to get at least one of the racks,” Brethova said.

In addition to the upfront costs, there is an estimated $100,000 yearly cost for maintenance and upkeep of the 10 stations currently expected. Levi Bachmeier, who has been working with Knutson on the project, hopes that this can be covered by an increase in Concordia’s student activity fee.

“If that can’t happen… then it’s just really not going to be feasible for us as an institution to get involved,” Bachmeier said.

There is currently discussion as to whether the fee should be raised to cover other costs, but Levi hopes that Student Government Alliance can give students more for their money.

“My goal is that the fee not only increases to maintain services that we already have, but that we’re also able to provide an additional service to students,” Bachmeier said.

If the increase is agreed upon, the yearly cost for students would be about equal to the cost of one gallon of gas. Proponents of the system have begun to use the catch phrase “burn fat not fuel.”

The system that B-cycle offers would be similar to the Nice Ride program that was recently installed in Minneapolis. Similar systems are also used in Chicago, Boston, Washington, D.C. and Boulder, Colo. Unlike earlier bike-share models where bikes were purchased and just left out for public use, this system tracks who has each bike and how long they have been out. B-cycle also uses GPS trackers on the bicycles to ensure they aren’t stolen.

Stations would be placed at NDSU’s main campus, Concordia, MSUM, and several downtown Fargo locations. The group is expecting to request 10 racks that would have 200 bike docks and 100 bikes. This way there would be space for the bikes to move around the most densely populated part of the FM area.

The systems already in place elsewhere have a time limit for using the bikes. While this does limit how far they could go, limiting their use helps to promote them as a mode of transport, rather than for touring.

“We just want to make sure that there are bikes in the racks, they’re available to people and people aren’t taking them out for a full day,” Bachmeier said.

Due to local weather, the system would be shut down during the coldest part of the winter. Jones stated at the meeting that the dates for removing and replacing the racks and bikes would be negotiable.

“It’s unfortunate that we can’t utilize it the entire season, but at the same time are people going to want to bike in February?” Bachmeier said.

During that time the bikes will go to a local warehouse for maintenance. The Great Northern Bicycle Company has already agreed to be the maintenance provider for the program. Regular maintenance will increase the longevity of the bikes and racks and will lower the upkeep costs.

The bike-share system would also fit with sustainability efforts, both on campus and in the community. Not only can students save fuel, but proponents hope that it will decrease the need for an expensive downtown parking ramp as well.

“Sustainability is a big deal for us,” City Commissioner Williams said at the meeting.

Bachmeier said that he hopes the system will be in place by next semester. The system will probably go through what is called a soft launch, at a time when use will be limited, a few weeks before the school year starts. Jones said this time could be used to fix any errors that occur so that the system will run smoothly once students return.

Bachmeier also hopes that once the bike-share system is in place that it will be able to grow.

“The idea is to expand with time,” Bachmeier said.