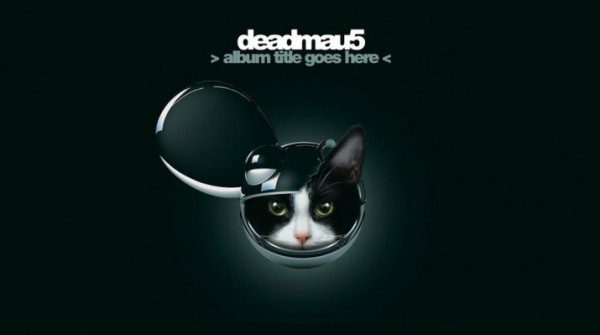 Joel Zimmermann, better known as deadmau5 is indisputably one of the biggest names in electronic music today. His signature mau5heads (essentially giant Mickey Mouse-inspired helmets customized with colorful paint jobs, strobe lights, and LCD screens) are so recognizable that they have made deadmau5 a household brand, used to sell not only records, but Puma sneakers, Nokia cellphones, and the console game DJ Hero 2, in which deadmau5 was a playable character. Deadmau5 was also the producer who brought us Skrillex (for better, or for worse), and the DJ who hosted the 2010 MTV Video Music Awards. Zimmerman’s somewhat eccentric artist name originated when he opened his computer to replace its graphics card, only to find a dead mouse inside. Over time he became known as “that dead mouse guy” in internet chat rooms, and he decided to embrace the name, though he changed the spelling to deadmau5 in order to meet the chat room’s 8 character limit for user names.
Zimmerman’s latest album, entitled > album title goes here < is actually his third album with a joke for a name (his debut album was titled “Random Album Title,” and the sophomore record was named “For Lack of a Better Name”), which could leave one wondering whether Zimmerman might be running out of ideas.

The opening track “Superliminal” is a fairly typical house opener, and gives way to “Channel 42,” which brings in some of the catchy hooks for which deadmau5 has become known. At this point it seems that the album is following the tried and true formula from Lack: a solid rhythm-based opener immediately followed by a catchy melodic second track, going into a vocal third track. However, as the third track, “The Veldt,” featuring singer, DJ and producer Chris James, begins, the sound takes a surprising turn. Tracks with vocal performances have become commonplace on deadmau5 albums, but “The Veldt” sounds like a house interpretation of hellogoodbye, with its whimsical lyrics and upbeat melodies, along with the digitally distorted vocals. Whether this is a good or a bad thing remains for the listener to decide, but fortunately the song has fairly extensive sections without vocals which are far more tolerable.

The fourth track, “Fn Pig” is possibly the album’s strongest track, building up slowly, with an extraordinarily “large” sound and with a very solid chord progression until a catchy filtered keys riff kicks in. The track then evolves into a deep bassline hook which momentarily breaks down into filtered keys again, before it returns to carry on throughout the rest of the song. What is perhaps the most interesting thing about this song, however, is its name, which references a YouTube video from 2010. In the video Zimmermann is playing Minecraft, repeatedly hitting a pig with a section of fence, while yelling profanities, in an attempt to get the pig to ride in a train cart.

The next track is the album’s main single — “Professional Griefers,” featuring My Chemical Romance singer Gerard Way. The music video for this single, in which Zimmerman and Way control giant mouse-shaped robots in a post-apocalyptic UFC-match, is supposedly the most expensive music video in the electronic genres to date. The track itself is pretty good, but the verse vocals sound like a schoolyard chant, and the choruses are clearly inspired by Way’s genre of choice. Again, whether this is a good or a bad thing depends entirely on musical preference.

“Maths,” “There Might be Coffee,” and “Take Care of the Proper Paperwork,” while all decent, serve to illustrate the overarching problem with the record: a severe lack of coherence. The first is a beat-heavy repetition on a single theme, the second is a slowly developing melody with a different sound entirely, and the latter is an industrial-sounding track one might expect to hear during an action sequence in a futuristic action movie. There is no way of really determining how we were brought from one to the next, which might not sound like a huge problem, but part of the appeal of earlier deadmau5 albums is the way in which Zimmerman connects his tracks, making the albums immersive listening experiences. Coming in with this expectation, discovering that the album is really just a collection of 13 disjointed tracks is more than a little disappointing.

The eleventh and twelfth tracks form an interesting combination, going from a mellow piano and bass guitar-based track with odd overdubbed spoken phrases, to a hip hop track written alongside the latino rap group Cypress Hill, best known for their 2000 worldwide hit “Rock Superstar.” These tracks are odd at best, and do nothing to complement each other. At this point, one is left wondering whether it would be better if the record would have ended with the album’s last “conventional” deadmau5-track, “October.” The final track, “Telemiscommunications,” featuring Imogen Heap has some redemptive quality, however. An ambient track with vocals describing the troubles of maintaining long distance relationships in the digital age, “Telemiscommunications” manages to serve as a fresh breath of air, without seeming out of place.

All in all, > album title goes here < is something of a disappointment. Although it has a large number of good tracks, it lacks direction and feels more like a collection of singles put on shuffle than a cohesive album. In a sense, this is not too far from the truth, since many of the songs have already been released as singles on Beatport and iTunes over the course of the last year. The overall quality of the songs is good (with a couple notable exceptions), but the immersive listening experience is completely lacking. The best way to buy this album is to go to iTunes or Beatport and find the songs you like, and then do the math on whether it will be cheaper to get the whole album or just individual songs. Every single track is available for individual purchase, and you won’t miss out on the full album experience, because there is no full-album experience to be had.