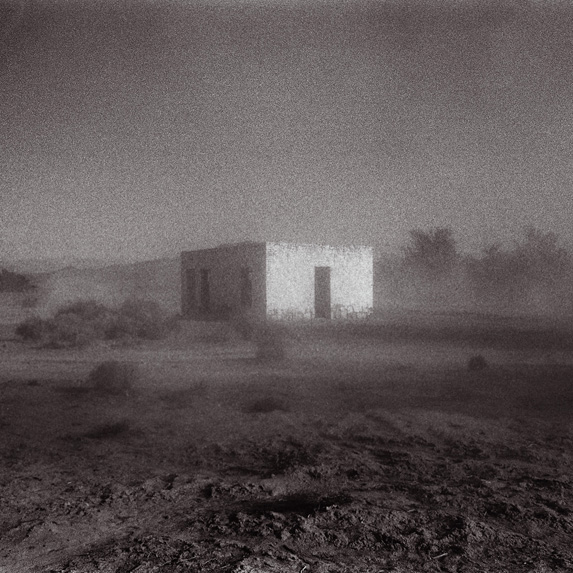 Does your band include a projectionist as a full time band member?

Didn’t think so… Godspeed You! Black Emperor, however, does. And if you’re wondering what kind of a name that is, you’re not alone.

The nine-member instrumental anti-government post-rock ensemble from Montreal were on hiatus between 2003 and 2010, and Allelujah! Don’t Bend! Ascend! is their first release since then. It is probably best described as a solemn and intense sound landscape from a post-apocalyptic world—picture the scene from 28 Days Later in which the protagonist walks through the empty, ravaged streets of London, and you’ll have a fairly good idea of what Godspeed You! sounds like.

Mostly because that scene is actually set to a GY!BE track.

The use of the term “sound landscape” is deliberate, because referring to the tracks on Ascend! as anything else would be misleading. There are melodies and patterns to be made out, but it’s not until four minutes into the first song that anything even remotely resemblant of a chord progression shows up. And even then, one would be hard stretched to really call it a melody. Ascend! has plenty of interesting riffs and progressions, but the emphasis is more on producing a mood in the listener than on creating memorable melodies. And it works.

The first track, “Mladic,” is twenty minutes long, and named after a Bosnian Serb military leader currently under trial for crimes against humanity. The first six minutes are a slow, slow, crescendo of feedback and effects, eventually growing into a concoction of eastern-inspired riffs. At about 12 minutes the track develops into a more traditional, powerful and deliberate prog-rock pattern, before it ends with a folk-inspired rhythm section reminiscent of the last few minutes of Rage Against the Machine’s “Aerials.”

“We Drift Like Worried Power,” which is another twenty-minuter, is built around a repeating, eerie, echoed, repetitive clean electric guitar theme. In fact, even when this theme gives way a good eight minutes in, the piece remains religiously committed to the two chords on which the initial theme was based until its sixteenth minute. However, Godspeed You! somehow manage to pull it off. The gradual buildup makes the track extremely powerful, and each new layer adds so much depth that one forgets that the piece is essentially a repetition on two chords.

These two core tracks on Allelujah! both use crescendo ingeniously to create an intensely estranged atmosphere, and are in themselves good enough to make the record one you wouldn’t want to miss— which is good, because the two shorter tracks aren’t worth the vinyl they’re printed on. Fortunately, the vinyl release of the album is packaged as a 12” A record with “Mladic” and “We Drift,” and a 7” B record with “Helicopters” and “Strung,” making it easy to pretend that the latter two tracks were never there in the first place.

All in all, Allelujah! Don’t Bend! Ascend! is a solid impressionistic album definitely worth checking out for anyone who is into progressive music, or who enjoys the post-apocalyptic aesthetic. And if you’re lucky, maybe a recycling station near you will take your B record.

—
If you want, you can check the album out before you buy it on Constellation Records’ Soundcloud.