My New Year’s Resolution Was to See Title Fight 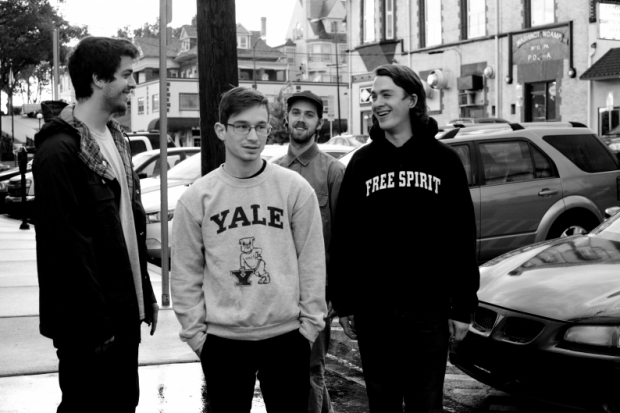 Title Fight opened their first tour of 2013 at the New Direction in Fargo. It’s a cozy little venue situated in a basement on Roberts Street in Fargo, right next to Paradox comics. The venue is significantly smaller than the Aquarium, only capable of holding approximately 200 people unless the staff finds it suitable to break the building’s fire code.

Speaking of fire, Title Fight has been a spark in the punk rock/hardcore scene around the US. With recent sell-out shows in NYC and Philly, this progressive punk rock band from Kingston, PA is growing on fans across the country. The downtown Fargo scene is predominantly hardcore and metal-focused so fans in the area jumped all over the opportunity to sell out this show.

I’ll stick with the “fire” theme. A sold out show at the New Direction, regardless of a majority skinny little pre-pubescent demographic, is uncomfortably HOT. Also, it’s LOUD. The New Direction lacks a stage so people, like myself, who were unable to keep growing past middle school have a disadvantage unless if they have snagged a spot within the first couple of rows. If you are of professional wrestling stature and you stand within the first three “rows” in a venue like this, you are officially the worst kind of human being. I was stuck behind two men that resembled the idiot trolls in the Hobbit so I literally saw the drummer’s face for 5 seconds (who’s uncanny resemblance to my ex-girlfriend’s boyfriend made his lack of visibility alright with me), Nick Russin (singer, bassist) for 30 seconds, hardly saw a glimpse of Jamie Rhoden (guitarist, vocals) since he’s tiny, and wouldn’t be able to point out the bassist if he was sitting next to me right now. This makes shows like this a huge let-down for those who can’t budge their way to the front and no raised platform or seating in the back. In a sense, I barely overcame what I stated in the title of this blog.

I go to a lot of shows and even the minute distractions can be equally as memorable as the most positive. No one wants to hear your voice if you’re not in the band. Not even your idiotic friends who think you have wit. Why do we have all these idiots in a crowd trying to have a contest with each other on who can say the one thing that will make others, especially band members, smirk or laugh? Who’s there to entertain? YOU OR THE BAND? *smashes vase into roommates big screen TV, sprints upstairs to take high blood pressure pills*

*deep breath* Oh hey guys! I’m back! Where were we? Oh, opening band of Title Fight. Sure!

Local bands got to open up for Title Fight. Tiny Moving Parts is the local favorite. Those guys are a ball of energy and have a responsive following. I’ve never been disappointed with the enthusiasm of this band and hope nothing but the best for them. Their music is right up the alley of La Dispute and Touche Amore which IS the future of melodic hardcore. I missed Go Murphy open because I was taking a SERIOUS nap to get psyched for the show but I’ve heard nothing but decent things. What’s Right played right after Go Murphy and seemed like a pleasantly pissed off, youthful Fargo hardcore band.

I’ll take a step back to say that the New Direction is not an awful place to see a show. It’s great if you have less than 50 people in the basement. I got to see KEN Mode, who recently has been getting great coverage by Pitchfork, with a crowd of 15-20 people and it was fantastic! The owners of the place are dedicated music listeners and will continue to try their hardest to make metal and punk shows like Title Fight happen. Without them (and Jade presents), I wouldn’t get to experience these moments in Fargo that I currently enjoy more than anything else.

Let’s get back to Title Fight. The set list was overpowered with the songs that made these guys the up-and-coming “hardcore punk” band. I feel this was to be expected in a small town market like Fargo where a lot of us here love the heavier, faster paced songs off albums. Unfortunately, they left a lot of what made them the “melodic” punk rock band out of their repertoire.

Title Fight can be equally entrancing and grating. Listen to any song with vocals sung by Nick Rossen (i.e. opening songs at the show, “Secret Society,” “Numb but I Still Feel It”, and fan favorites “Shed,” and “27”) and you’ll notice the growling yells that can be compared to vocals like Polar Bear Club and Metallica. Oh God, I just put Polar Bear Club and Metallica in the same sentence. It’s official: I’ve lost all credit to write anything about music ever again. James Hetfield and his crew can’t slow it down and start showing what I call the “progressive” and melodic side that you hear from half of Title Fight. You get chilling and raspy crooning unlike anything else you hear in the genre. Both lead singers can use the signature intense growl but I prefer to listen to Jamie Rhoden melody driven songs (“Head in the Ceiling Fan”, “Where Am I?”, “Lefty” and “Stab” [which didn’t play and I wanted them to play it MORE THAN ANYTHING]). These songs typically have the riffs that drive the melody forward and are the strong suit of Title Fight.

I picture their future records to steer away from the faster paced, punk rock songs and geared more towards the melody they reveal in “Where Am I” and “Lefty”. I’m being ballsy here because they’ve made their fame from the “hardcore scene” and their songs that have the energy similar to most hardcore/melodic punk songs. Maturity will continue to lead this band in new directions. I don’t think I’m alone in thinking that Title Fight is already light years ahead of most “hardcore punk” bands in doing this. Regardless if I am right or wrong, Title Fight is in their prime and have a long, successful career ahead of them; something that Aaron Rodgers is looking back on already. I hope for future Title Fight shows in the Fargo area that allow more of an audience with a more visible presence of the band. *ahem* USE A STAGE!