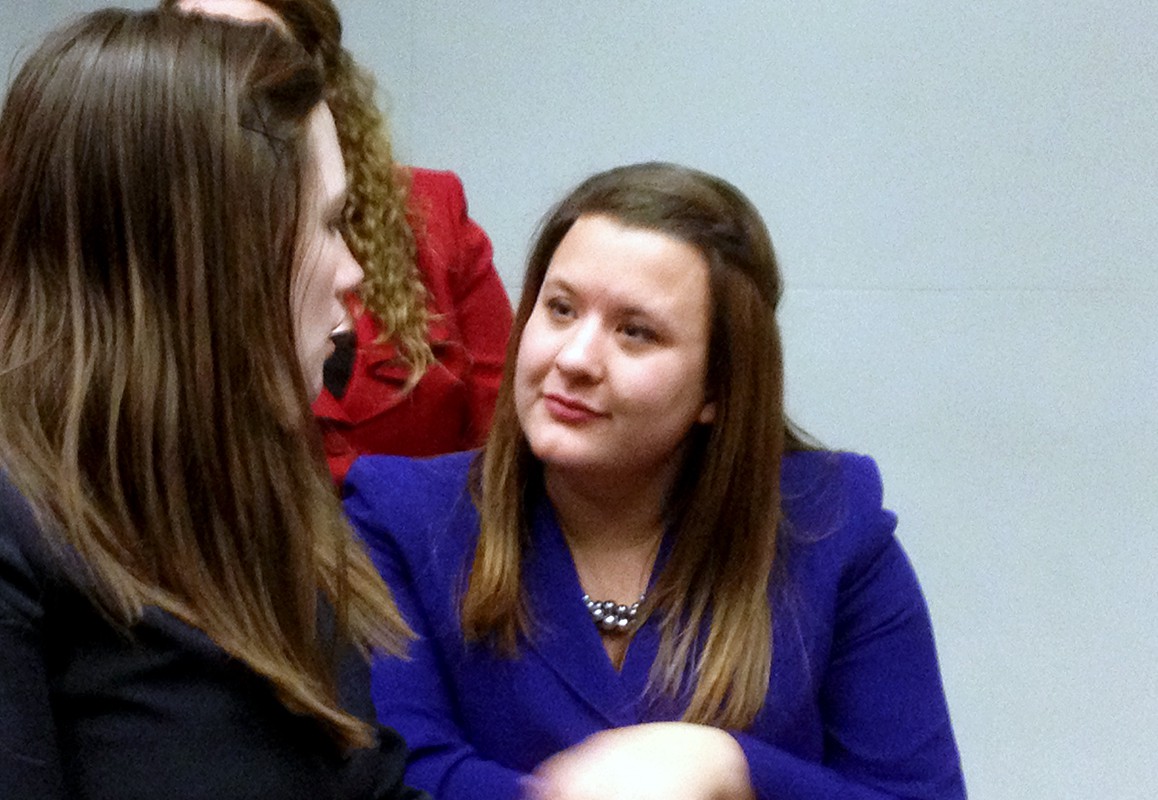 Sitting in the passenger’s seat of an Impala, Britt Aasmundstad is the designated DJ, choosing songs to play from an iPod Classic to keep the driver from falling asleep at the wheel.  Aasmundstad, along with three of her teammates, belt the lyrics to “Die Young” by Ke$ha as they make their way back to Moorhead from a speech tournament in Lincoln, Neb.

This drive marks the end of the second tournament senior speech team member Aasmundstad has traveled to since returning to the Cobber speech team this semester. Aasmundstad interned in Washington, D.C. this past fall.

Regardless of her absence, Aasmundstad never felt completely detached from her teammates.

“I always felt very connected to the team,” Aasmundstad said.  “I still…cared about how the team did even though I was gone.”

To stay connected with teammates, Aasmundstad peer-edited drafts, offered advice on topic ideas, and sent a motivational video and messages.  She also stayed in touch with coaches about team goals and culture, so when she returned, she would be on the same page.

While in Washington, D.C. Aasmundstad interned for Republic Senator John Hoeven from North Dakota.  She originally planned to travel to three tournaments; however, her goals changed.  She became close friends with a group of five other people from the program and wanted to spend her time eating out, visiting art galleries and used book stores and exploring different neighborhoods every weekend.

Additionally, the logistics of renting a car or taking a taxi to travel to numerous tournaments turned out to be too overwhelming, according to Joseph Kennedy, the assistant speech coach.

The one tournament she did travel to was at George Mason University, which was only twenty miles from D.C.  As the only member from Concordia to travel to the tournament, she traveled with the team from GMU.  Andrew Eilola, a Concordia speech alum and first year graduate teaching student at GMU, was there to support her.

“(Speech) is very community-driven,” Aasmundstad said.  “(The George Mason competitors) accepted me like they had known me their entire lives.”

She also had competitive success at the tournament.  Aasmundstad received third place in extemporaneous speaking on the first day and first place on the second day as well as fourth place in impromptu.  Even though she was the only Cobber at the tournament, Concordia College received fifth place overall.

The tournament reminded her about her passion for the activity, and it motivated her to work hard upon her return to Concordia second semester.

“It helped me light a fire under myself,” she said.

The motivation didn’t leave her when she returned to Moorhead in January.  She put in an estimated 40-hour work week, writing and editing drafts and memorizing final speeches.

Aasmundstad’s first tournament back with the Concordia team was at Concordia University in Seward, Neb.

“I tried not to have any expectations,” she said.  “I was so scared of falling on my face.”

She ended up winning individual sweepstakes on the first day, meaning she was the individual who received the highest scores on her speeches combined, and received second place in the tournament overall.  Additionally, she qualified one of her speeches for the national tournament in April which will take place at Hutchinson Community College in Kansas.

“That was the most competitively successful I’ve been,” she said.

Her success continued this past weekend during the tournament in Nebraska.  She received awards for a few more speeches, and her humorous persuasive speech, which encourages people to stay politically active after the election season is over, qualified for the national tournament.

Despite her four-month absence, Aasmundstad made a successful transition back into the speech circuit.