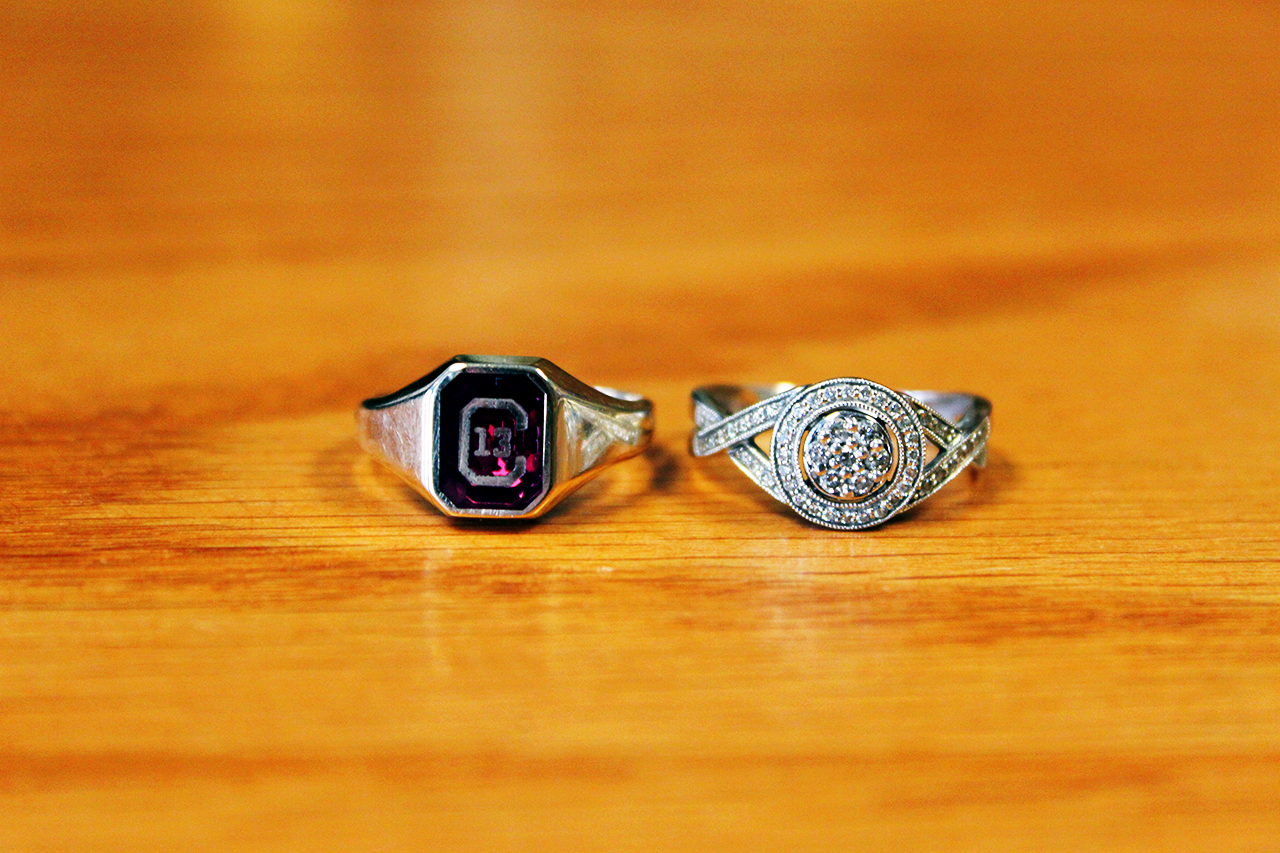 He saw her at a produce stand.

Loren Johnson was filling in for another worker, selling vegetables in a Kmart parking lot, when he met his future wife. Amy Brown was delivering farm-grown fare that day, and though they only spoke briefly, he knew.

“The night after I met Amy, I went back to my friend Alex’s where I was staying and I was like ‘Dude, I just met the girl I am going to marry,” Loren said.

Now in his final semester at Concordia, Loren juggles a 50-hour workweek, classes for his graphic design major, and his new life as a married college student. On July 28, 2012, Johnson and Brown became the Johnsons, and Loren became one of 19 Concordia students to be both student and spouse.

Amy, though not a student, also works 25 hours a week. She nannies for a young family and holds a part-time position at Bath and Body Works.

“For me, personally, it’s really hard,” Amy said, “because he’s not around and I’m not working very much. He’s always doing something: homework, working. He has three jobs and is also going to school full time, so it’s really hard to balance time. I can’t imagine being in his shoes.”

The couple considered marriage very soon into their relationship, which was anything but typical. Amy’s father requested that the two enter into a courtship, so instead of going on dates with just each other, Loren and Amy couldn’t be alone. Amy’s younger brother accompanied them often.

“Basically, he came over to our house and got to know my whole family,” Amy said.

Their courtship was meant to be spiritual-based, according to Loren, who was asked to join Amy’s family at church at least once a month. Just 10 months after their courtship began Loren and Amy were married in Fergus Falls, Minn., in her home church.

Questions about whether or not they should wait to be married until Loren had graduated caused them to wonder about the timing of their wedding, according to Amy.

ON THE OTHER HAND

She saw him in the stairwell of Hoyum Hall.

Natalie Decker, who was a sophomore resident’s assistant, met Joel Leeman for the first time in passing as he headed to his single room a few floors up. They talked about the ultimate Frisbee event their floors were co-hosting that weekend.

“I wasn’t going to go to it,” Joel said, “but then I found out it was her floor and I thought she was cute so I went.”

Their relationship progressed quickly. On Sept. 6 they hung out in Natalie’s dorm room while she was on duty, and played UNO while watching “Aladdin,” and on Sept. 10 they started “officially” dating. Ten days later, Joel met Natalie’s parents when they visited for family weekend and her birthday.

“I was like, what do I get a girl that I’ve known for 3 weeks?” Joel said as he remembered those days.

“I was really sick,” Natalie said, “so he got me some Kleenex and some chocolate.”

This was different than any relationship either Joel or Natalie had had in the past, and they talked early on about the possibility of marriage. But their families weren’t so sure they would encourage the young couple to take that step.

“When we had initial conversations with both of our parents, they felt strongly that we should wait at least a year after college to get married,” Joel said.

But after two years of dating, Joel proposed to Natalie on Aug. 4, 2012. The couple has planned an Aug. 2 wedding.

The financial consequence of being married was a factor in the decision for both the Johnsons, and Joel and Natalie.  For the engaged couple, the looming unknown of the job search is one reason why they wanted to wait until they had both graduated to be married.

“We are both pretty big planners,” Joel said. “I want to look for an apartment, but we can’t, because we don’t know where our jobs are.”

He added that their parents were helpful in asking them each to consider the feasibility of paying for a wedding while also paying off student loans.

For the Johnsons, the financial benefits of being married far outweighed the burdens. The change in his Free Application for Federal Student Aid has meant that he pays significantly less out of pocket to attend college than he did when he was single.

Eric Addington, Concordia’s Director of Financial Aid, explained that answering ‘yes’ to the FAFSA question “Are you married?” makes a student shift from “dependant” to “independent.” This can be a game-changer in terms of eligibility for need-based allocations.

“Often times, their financial need goes up as an independent student,” Addinton said. “That can be beneficial in terms of need eligibility.”

Academic merit scholarships do not change if a student starts at Concordia single and then gets married, according to Addington.

People react differently to the news that Joel and Natalie are engaged, but the overwhelming response is positive, they said.

“Mostly what I’ve heard from people is ‘Oh my gosh, we’re really happy for you guys, but marriage, wow, I can’t even imagine getting married,’” Natalie said.

And despite the challenges of balancing jobs, school and marriage, Loren and Amy know that this busy period is only a “season of life.”

“Yeah, there’s ups and downs,” Loren said, “but that’s going to be our whole life.”

2013-02-07
Previous Post: Student orgs get in on basketball action
Next Post: Wrestlers maintain strong record: The team looks ahead to success at regionals