Student orgs get in on basketball action 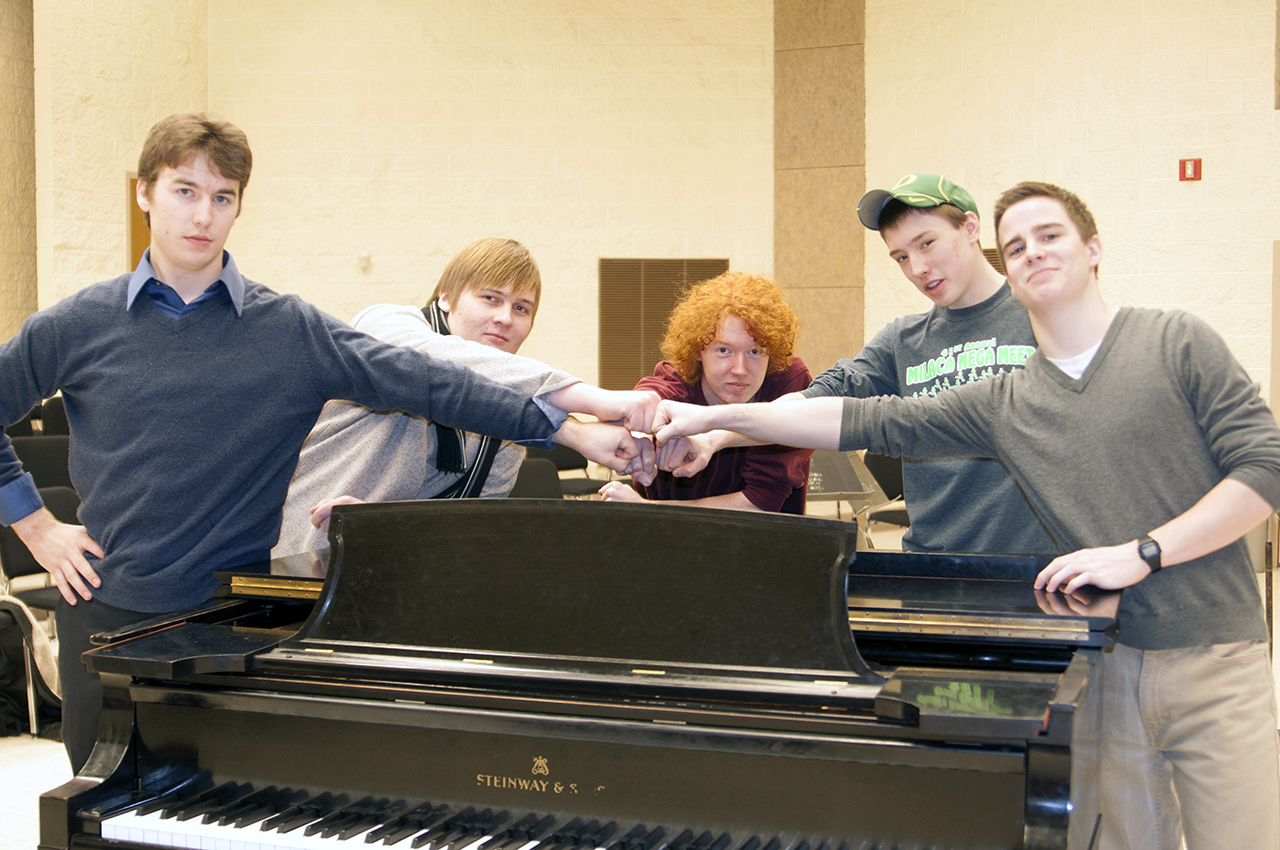 This month, Cobbers from all areas of campus will unite on the court as groups form for basketball intramurals.  Students from the nursing department, the freshman men’s choir Männerchor, and other sports teams express their competitive side while representing their Concordia groups.

Juniors Bridget Martini and Kayla Carter, organizers for this year’s basketball intramurals, formed three leagues for men—A, B, and C—and one women’s league in order to provide a wide range of skill levels and players.

“It’s great to see students from different groups come together and play,” Martini said. “But intramurals also gives them the ability to have separate leagues so they are at the same level. And it is rewarding to just see how much they get into it.”

At the beginning of the month, Martini hung posters inviting students to form basketball teams of five people or more. She then organized the teams into their respective leagues.  Each league has about 10 teams that play a round-robin against each other about twice a week for an hour.  The scrimmages are held Monday through Thursday night in Olson Forum.

Both Martini and Carter said they were impressed by the enormous response they got from students interested in forming intramural teams. They said students also had a great time coming up with original team names.

“It’s good team bonding for sure,” Carter said. “You see each team really come together and get their own set of jerseys and make themselves stand out.  And I really like the team names they come up with, very creative.”

Some of these creative names on the men’s side were “Get Buckets or Die Tryin,’” “The Abusement Park,” “The C-Men,” and “The Männerchor Testostertones.”

The women’s league also had innovative team names, like an all-nursing students team called “The Shots.” They represent the Student Nursing Association (SNA), a group on campus where nursing students can volunteer and help out in the community.

Junior Brianne Downs, team captain for The Shots, said being a part of intramurals has been a good team-building activity for the nursing students. She said it has also been an outlet for her.

“I just like to be able to do something that is not nursing-related for a little (bit), because it takes the stress out and it’s good exercise,” Downs said. “Since I don’t have much time to do anything else, intramurals is great. It’s just an hour a night, twice a week, so it’s not a complete commitment.”

Junior Emily Knudson, another SNA student on The Shots, also said it was great to get a break from the intensity of being a nursing student while still representing her program.

“I love basketball and we get to represent SNA at the same time.” Knudson said. “I think it also puts our name out there and shows that we are involved in a lot of things.”

Senior Erik Carlson, a player for The C-Men, said his favorite part of intramural basketball is having an excuse to go exercise while socializing.

“My favorite moments are the games where everyone has fun, that it’s not necessarily competitive, but people are laughing and joking around and interacting with the other team,” Carlson said. “You can make an activity out of it rather than an actual sport. And that’s what the C League is for me, a place for average Joes that just want to get a little bit of exercise.”

Carlson said that he was excited to see people all around campus feeling comfortable enough to play basketball out on the court.

Patrick McGuire and David Najjar, players from the Männerchor Testosterones, said intramurals have been a good experience.

“It’s a lot of fun,” Najjar said. “We like to joke around a lot and make fun of ourselves. We even start singing if we are down by a lot. And although I’m a little bit out of my element, it’s nice to be with the guys.”

McGuire said that when the Männerchor director, Michael Culloton, found out about the choir’s intramural team he thought it was hilarious.

“At this point in the year we have already all bonded together in Männerchor, and intramurals is just a way to bring us together in another area,” McGuire said. “And now Culloton makes fun of us every time we lose horribly.  But we have a special bond with him now even though he was telling us we shouldn’t affiliate with Männerchor if we were still losing like that.”

McGuire, Najjar, Carlson, Downs and Knudson were all impressed by how great Martini and Carter have done in organizing the program.  Martini said that although organizing intramural basketball has been stressful, it is rewarding to see so many Cobbers come together.

“There’s a lot of great people here and I think it definitely contributes to the Cobber atmosphere,” Martini said. She also said that intramurals are a great way for Cobbers, particularly those new to campus, to meet fellow students.

“(A)lthough you may not know everyone on campus yet, you can really get to know them through intramurals,” Martini said.