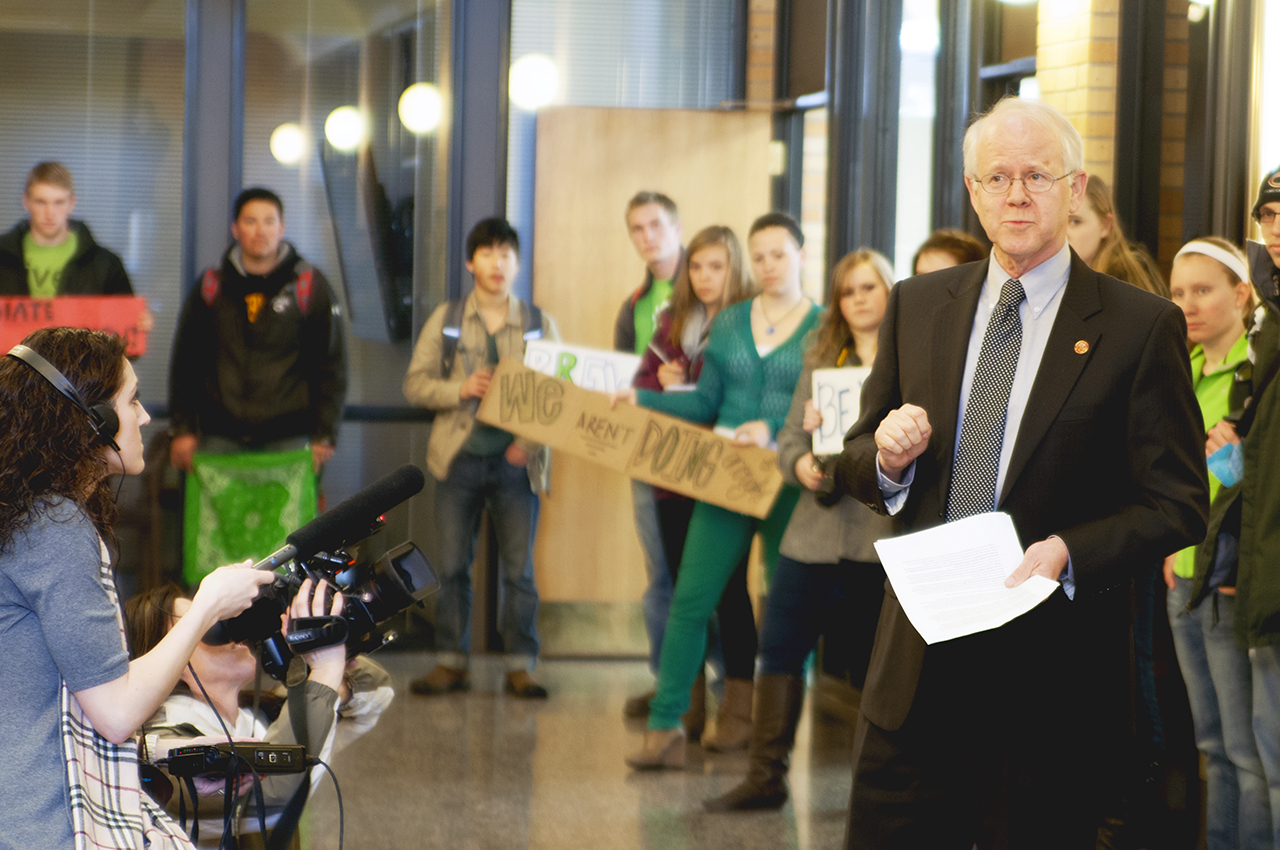 Standing in Lorentzsen, President Craft observed quite a different scene than usual over the Tuesday lunch hour.

A group of students who share a passion for sustainability wrote and circulated a letter addressed to Craft last week that identified four goals they believe Concordia should work toward. Students, alumni, faculty and staff could sign the petition. The goal was to reach 300 signatures. They reached 317.

On Tuesday, they congregated in Knutson and marched over to Lorentzsen. The goal of the event, referred to as “Occupy Lorentzsen,” was to protest what the students believe to be Concordia’s lack of action on the sustainability proposals mentioned in the president’s strategic plan.

Concordia students traditionally propose their ideas through meetings and presentations, but this group decided to take more immediate action.

Senior Kristi Del Vecchio said that students wanting change on campus have to go through processes and meetings, proposals after proposals, many times only to face rejection.

“There are no hoops, no barriers,” said senior Kelsey Kava, and an organizer of the rally. “We are sick of waiting to hear about approval.”

Concordia Associate Professor of Sociology, Andrew Lindner, said that while Concordia does not have a strong tradition of student protests, the students’ actions and desires toward making their voices heard should not be disconcerting.

“We are exercising our right to a voice,” Del Vecchio said.

As students poured into the Lorentzsen lobby, they chanted, “For us to gain, we must sustain!”

Andrew Carlson, a sophomore, said he thought Craft would have a big smile on his face.

And he was right.

Craft was grinning ear to ear as Kava and Stephanie Barnhart, fellow senior and organizer, explained why they were there.

“As a leader in the area, we need to live up to our mission,” Barnhart said.

Barnhart and Kava urged the president to remain accountable to the sustainability goals, which are identified in the college’s vision for sustainability released in December. The letter specifically stated that since the release of the document two months ago, no action has been taken.

Carlson said that after looking through the document, it needed to be simplified to make it more accessible to the Concordia community.

To do this, the group of students first created four tangible and concrete goals that are easy to do and start, Kava said. Various students participating in the rally read these goals, as well as parts of the letter, to Craft on Tuesday.

The first of four goals is for the campus to create a goal of reducing its carbon emissions by 30 percent over the next 10 years.

Second, they urged Concordia to make their current energy use more transparent, or accessible to the public. Carlson explained that it isn’t known how much energy is used on campus. They want to be able to see where Concordia stands in relation to other schools of similar size.

Third, the students called Concordia to take immediate action on feasible tasks that can easily increase sustainability now. Such action could include reducing the amount of light used in unoccupied spaces around campus and decreasing the amount of heat used.

Lastly, they would like to see sustainable business practices integrated into the Offutt School of Business curriculum.

Craft addressed the group, composed of students and congregated faculty and staff members after the rally.

“I affirm what you are doing,” he said with a smile, “and let me tell you, it has been my lifelong mission to be occupied.”

The president supported the students’ requests as well as their ideas, passion and fervor. He agreed with them, saying that Concordia has a lot of great opportunities for incorporating sustainability.

“We have the chance to lead the way in doing the right thing,” Craft said.

In response to the four specific goals, he said they would be directed to the President’s Sustainability Council, which was established in Fall 2011 and is made up of faculty, staff and students. Craft said that over spring break, he received a proposal from the council that described specific goals to be achieved. By the end of the semester, they hope to create a more detailed timeline with goals and targets of achieving the sustainability the students want.

Craft said that just recently, Concordia has registered as a participant of the Sustainability Tracking Assessment and Rating System. STARS serves as a tracking system for educational institutions in measuring their sustainability, how well they are doing and then publishes their results.

Concordia has also received funding from the Cargill foundation to put meters on the buildings to find out how much energy they are using. In addition to this funding, a revolving fund exists to provide the means for sustainable efforts.

Finally, Craft said a record is being made of the past and current efforts as well as the future goals in regards to sustainability. Once created, this will be put online so the Concordia community can stay up-to-date on what is going on.

The group of students who began the movement chose to not name their group, so as to have it represent and encompass all students on campus, Carlson said. Everyone was welcome to join in the movement by signing a petition and occupying Lorentzsen to confront the president.

“The school is here for us,” Carlson said. “We have to show our passion.”

By the end of the protest, many staff members had come out of their offices to witness the event, and more students and faculty had assembled right inside the doors to Lorentzsen.

Carlson said that leading up to the event, he was nervous because it had never happened before, and something like this is out of everyone’s comfort zones. But as he walked and chanted with the group, he realized it was actually going to happen.

“It wasn’t what I expected,” he said in response to Craft’s address. “They were things the college was already doing.”

Carlson said he encourages the Concordia community to keep an eye out. Concordia needs to be held accountable, he said.

And the president seemed to recognize that.

“Looking forward, it shows that these things matter,” Craft said. “We will not let you down.”