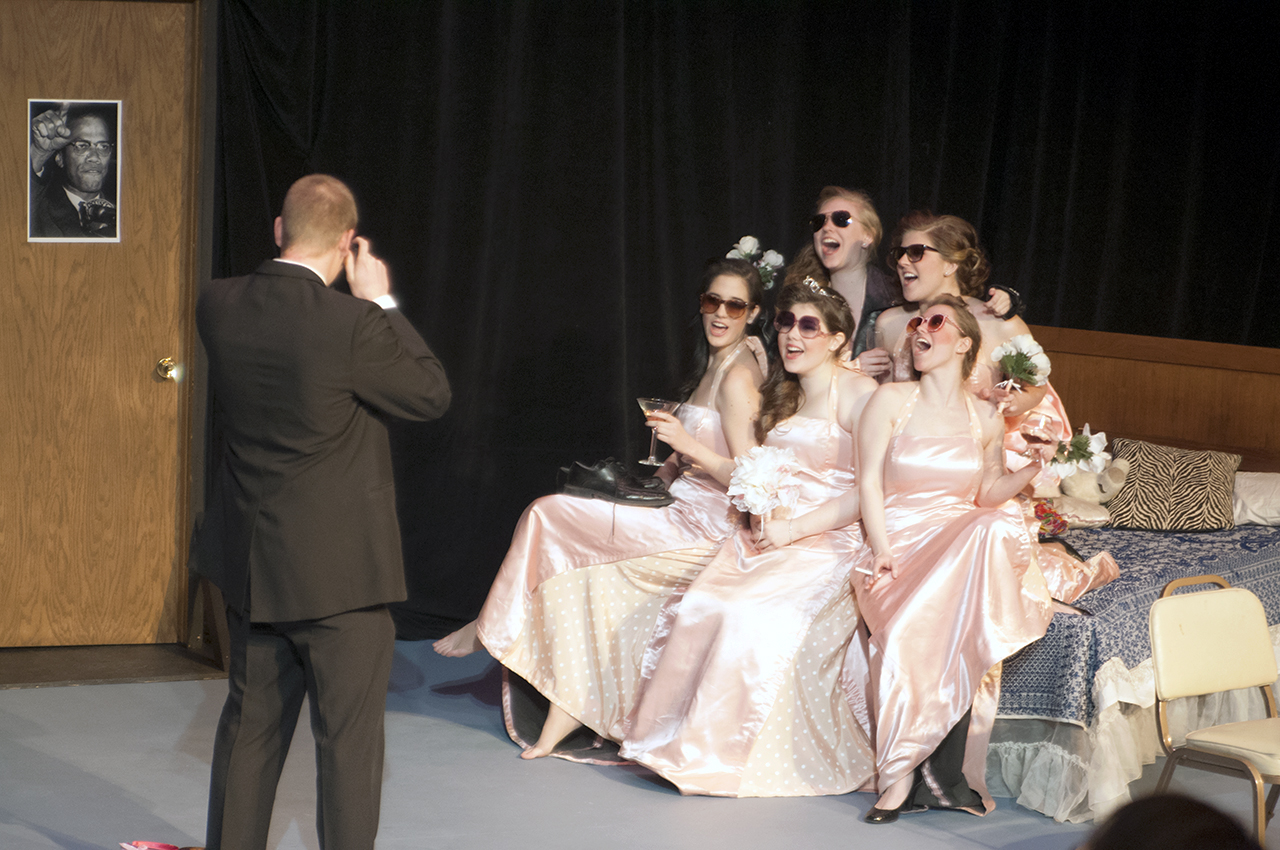 “Anything else, Miss Missy?” the stage manager asked as she looked up at the director sitting in a middle row of the audience.

The director didn’t need any more tasks completed from her stage manager before their Sunday night dress rehearsal began. After checking the progress of some of the actors in the dressing room to make sure they were on track to begin at 8 p.m., director Missy Hildebrandt was able to joke with the cast and crew who were ready for the rehearsal.

Hildebrandt, a senior theatre arts and classical studies major, directed the play “Five Women Wearing the Same Dress” which showed nightly March 14-16 in the Frances Frazier Comstock lab theater. It was her senior thesis project within the theatre department. The play is a comedy about five bridesmaids who realize that they have more in common with each other than they do with the bride.

Because she collaborated with her peers, Hildebrandt explained that she had to learn how to “balance the line between friendship and leadership.”

She didn’t find this to be a problem. While the students were goofballs at times, they recognized this was Hildebrandt’s senior thesis project and remained respectful, she said.

Junior Rachel Lindgren, who played the role of one of the bridesmaids, understood that this was a new experience for Hildebrandt. Because of this, Lindgren felt that she wasn’t as intimidated with Hildebrandt as she has felt when directed by faculty members.

Hildebrandt’s position encompassed more than directing the actors. She also took care of the procedural tasks, responsibilities she never had to worry about before. These responsibilities included choosing the play, publicizing for auditions, gathering set technicians and designing the set.

“My biggest stressor was ‘how was I supposed to get five matching dresses on a small budget’?” she said.

She found what she was looking for in the wardrobe storage in the basement of the theater. The outfits were originally dance costumes but were able to be turned into bridesmaid dresses by sophomore Axl Dahl who worked as the costume designer.

While the play was entirely Hildebrandt’s project, she was able to approach theater faculty for advice, including Christian Boy for set design and David Wintersteen for directing feedback.

She also consulted a book called “Notes on Directing” which she said made a large impact on her as a student.

But, at the end of the day, the decisions were hers to make.

“Independence is scary, but it’s really cool at the same time,” she said.

Hildebrandt also used her play as a platform to fundraise for the Rape and Abuse Crisis Center of Fargo-Moorhead, an organization she feels is often overlooked when it comes to financial support.

Sophomore Hannah Amundson, a friend of Hildebrandt’s, said that Hildebrandt found a way to connect her thesis project to real-life issues.

“(She used her project) to inform and better the community,” she said.

The cast invited the audience to make donations for the center both before and after the show. They raised about $200.

Hildebrandt felt that while the experience as a whole was eye-opening, it was not off-putting because, despite the amount of work and stress she experienced, she feels confident that directing is something she is capable of continuing after college.

“At the end of the day, I realize how worth it and how important it is for me,” she said. “This is truly something I want to do for the rest of my life.