Startup weekend not what Cobbers expected 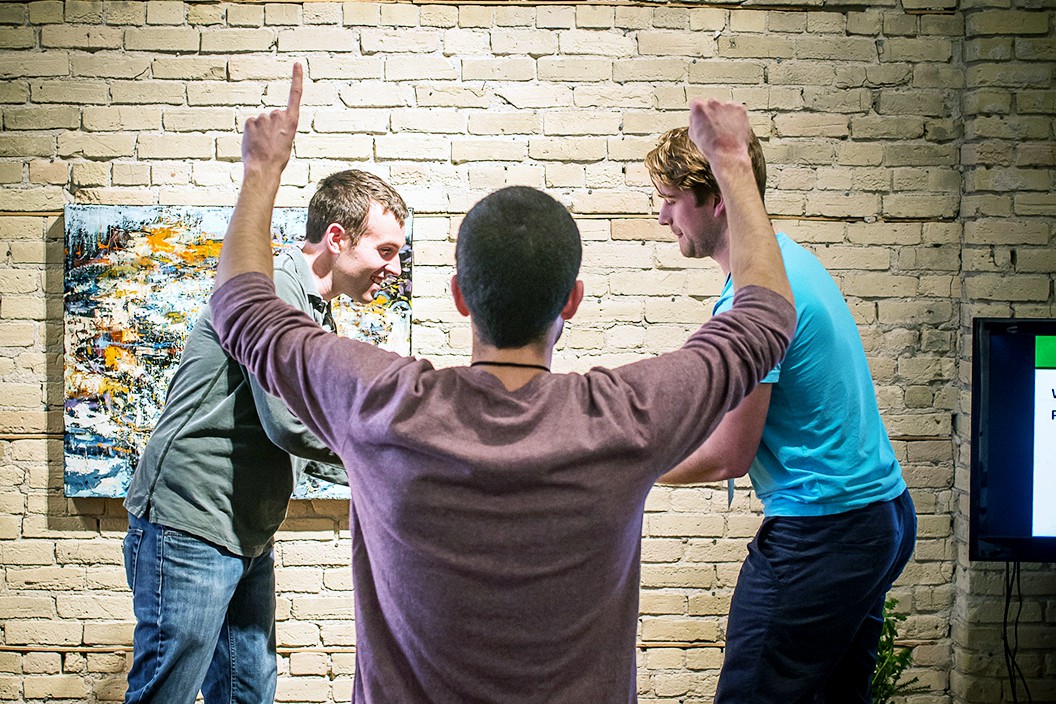 Zach Lipp, Christoffer Birch-Jensen, Matt Gantz and Levi Bachmeier signed up for the Startup Weekend event expecting 54 hours of serious work committed to ideas that would significantly influence the community. Once they arrived, they witnessed something else.

Startup Weekend, a nonprofit initiative that promotes entrepreneurship, came to Fargo on March 8 for the weekend with eight teams competing to be the top Startup project. The event revolves around giving groups of professionals and non-professionals 54 hours to pitch an idea for a business and then to plan the implementation of that idea.

The program was met with mixed feelings.

“I was dissatisfied because it was so different from what I was expecting,” said Zach Lipp, a freshman majoring in business with an economics concentration. He attended the first day of the Startup Weekend but left on the second day.

Lipp was hesitant after he heard the pitches on Friday night.

“I was expecting a different kind of business person,” he said. Lipp said that he had anticipated pitches for nonprofits, brick-and-mortar businesses and the like. Instead, most pitches were for cell phone applications.

“I thought the ideology of the event was great, but the practicality of it wasn’t there,” said Levi Bachmeier, a junior social studies education major.

Bachmeier said he would have preferred that brainstorming and research went into creating the pitches, rather than having an end product in mind throughout the entire process.

A pitch that stuck out in Lipp’s mind is BeerFlowers: an application that allows a person to order alcohol to be delivered much like a bouquet of flowers.

Pitches ranged in seriousness—from Shirt Roulette, a website in which people can swap shirts with people from around the world, to TherApptainment, a mobile program that “gameifies” physical therapy and helps physical therapists check-in with their clients remotely.

Another application pitched at the event was called “New York Sock Exchange,” in which a person can pay a membership fee to have a new distinctive pair of socks delivered to them by mail every month. The socks would be donated to charity at the end of the month.

Greg Tehven, one of the organizers of Startup Weekend, pointed to the New York Sock Exchange as an example of a business model in which companies can do good with the resources available to them.

Tehven, a social entrepreneur originally from the Fargo area, focused on how events like Startup Weekend can build community. Tehven has organized past Fargo events like TEDxFargo and Fill the Dome, an area-wide food drive.

“It’s important to shine light on the fact that Fargo has amazing, talented people,” Tehven said.

Tehven stressed that while the Fargo-Moorhead area is not generally viewed as a place that breeds innovative business models, it is home to adroit people who can create things and businesses that benefit the community.

“Our economy is built by small companies. The more startups we can support the better chance our local economy has to thrive,” Tehven said.

Lipp pointed to the size of the community as being a hindrance on the kinds of pitches that were presented at Startup Weekend.

“A big thing about events like this in Fargo-Moorhead is that it tends to appeal to a fixed set of people in the area. If there was a more diverse set of people, it may have not focused as much on mobile apps and more on social entrepreneurship or brick-and-mortar businesses,” Lipp said.

Tehven and Lipp were both impressed by the amount of community support for the event, which involved local businesses providing space and food for the participants. The Fargo Theatre, Atomic Coffee, Sundog and Mezzaluna supported the event, among many other businesses.

Startup Weekend events have happened around the world in communities of all sizes since 2007. According to Startup Weekend’s website, there have been 1068 of these events in 478 cities, ranging from New York City to Izmir to Cleveland.

While Lipp was frustrated by the event, he believes a lot of it has to do with the event not being as accessible to students as he had expected.

“I think the problem is that we were on the less valuable end of two spectrums. We couldn’t help with coding or design; we could only help with marketing,” he said.

Startup Weekend’s website identifies attendee’s backgrounds as being about half technical, including coders and designers and the other half business-oriented, including marketing, finance and law.

“The teams wanted to make supergroups made up of masterminds,” Bachmeier said. He said that this made it difficult for non-technical attendees to learn a lot from people with more technical experience.

Tehven said that while college students don’t have the work experience of other participants, their presence was beneficial.

“Everyone can add value to an event like this,” Tehven said. “It’s a learning experience for everyone.”