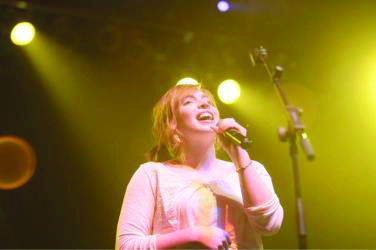 Fargo native and Concordia freshman Jenna Wawers has known about the Fargo Star competition for years. This year her parents encouraged her to audition by submitting a YouTube video. Wawers agreed.

For her audition, Wawers sang “Valerie” by Amy Winehouse.

“It’s my go-to song. It was nice and upbeat and that’s what I gravitate towards,” she said.

The Fargo Star is a singing competition that takes place each year in March. Once the YouTube video submissions are in, the videos are divided into three rounds and then posted with the contestants names on the Fargo Forum website.

Then fans were allowed to vote for the top two in each round. These singers would advance to the final. In round four, everyone who hadn’t made the final could audition for one of four “wild card” spots. Although Wawers didn’t make it in the first round, she made it through during round four.

“I knew that if I just stopped it (the competition) altogether I probably wouldn’t make it in,” she said. “So I tried to stay positive.”

After the finalists were announced, Wawers picked the song she would sing in the final. Wawers chose “Fine by Me” by Andy Grammer.

The songs are then sent to Russell Peterson, who is part of the band Post-Traumatic Funk Syndrome. Peterson is also an associate professor of music at Concordia. Transcribing the music usually takes about 40 hours, he said. Then the night before the competition, the competitors rehearse with the band.

“I think we are a little out of our comfort zone,” he said. “But I think we do it well.”

“It is great opportunity to sing at a venue with a live band. I think it was more about the experience rather than the actual winner,” Gerber said.

Finalists were encouraged to invite friends and family to the event. Wawers enjoyed having people there to support her. Celia Holten, who went to watch, has known Wawers since elementary school.

“I know this sounds cheesy, but I loved seeing how passionate Jenna is about singing,” Holten said.

During the final, Wawers competed with nine other finalists at The Venue at The Hub. When audience members arrived at the Hub, they received ballots to cast their vote. Wawers performed last.

“It is not always talent…it’s who you can get to vote,” Wawers said.

“It seemed like it was more of a popularity contest,” he said. “The girl that won wasn’t the best (musically), but she had a lot of people there supporting her,” he said.

“Oh, it’s totally based on the audience voting. If you bring the most friends…you win,” he said. “That’s how that gig is. Whether it’s fair or not, that’s not the point.”

Wawers began singing when she joined choir her freshman year of high school, but she doesn’t participate in choir at Concordia. Fargo Star was a fun chance for her to get up on stage and perform.

Before the final, Wawers’ friend, freshman Antonio Burks, didn’t even know she sang.

“I’m the belt-it in my basement kind of girl,” she said.

This article was submitted by Kaia Lunde, class of 2013. She can be reached at klunde@cord.edu.