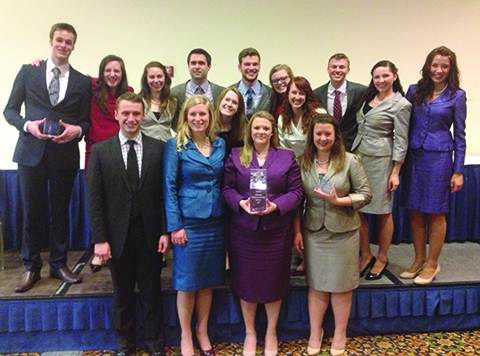 Thirteen Concordia students qualified for the national tournament, and two students won individual awards. Senior Britt Aasmundstad, (Devil’s Lake, N.D.), and sophomore George Kueppers, (Spicer, Minn.) made the cut from the guaranteed preliminary round competition to single elimination finals. Aasmundstad reached the quarter-finals of the impromptu speaking event while Kueppers reached the quarter-finals of after dinner Speaking. Their quarter-final finish placed them among the top 24 competitors in the tournament.

“This award is a testament to the work of all our speech competitors,” says Concordia Director of Forensics, Fred Sternhagen, “The overall school award is determined from the combined performance by all of a school’s competitors—not just a school’s top finishers. This finish would not have been possible without the strong participation of all our students and without the contribution of our seniors who allowed us to get to this point.”