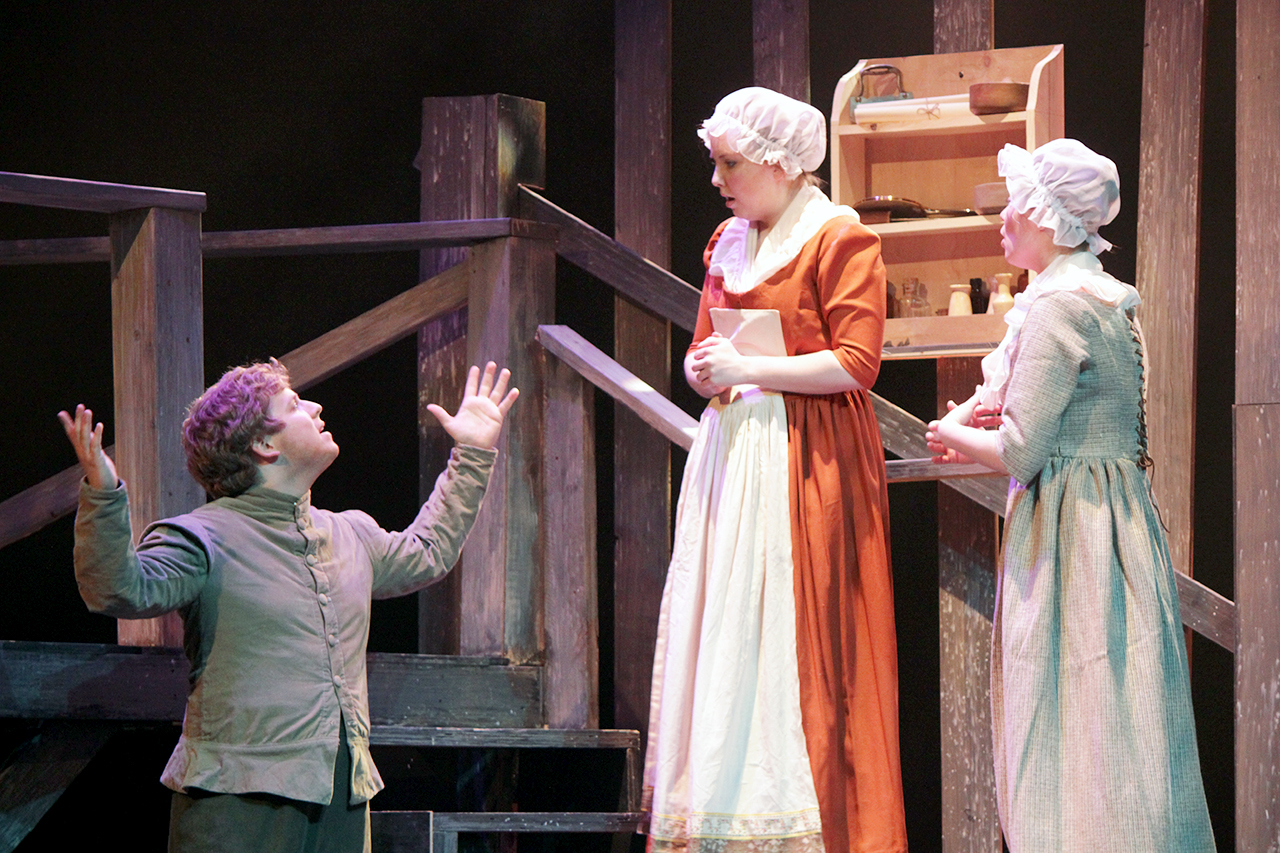 According to the cast members of “Vinegar Tom,” this is a play about witches with no witches at all.

The play “Vinegar Tom” was written by Caryl Churchill in 1976, but it is set in 17th century England. The show has strong feminist themes, which director Jen Thomas is excited to bring out and give the women at Concordia a chance to perform in some non-traditional roles.

Thomas explained (without giving away too much) how research has shown that the women who were persecuted in the 17th century weren’t witches at all; instead, they simply fell outside of societal norms and were labeled as witches because people didn’t understand them.

“The script really focuses on what we don’t speak about,” Thomas said.

Due to the nature of the script, Thomas wrote a “sensitive material advisory” to send out to the president and provost of the college to make sure it would be approved. The play contains themes and vocabulary considered inappropriate by the general public, but Thomas doesn’t want this to stop people from coming.

“Be open to possibilities.” Thomas said. “The script doesn’t allow for the audience to be complacent, and as our mission statement at the college says, we can’t be complacent. If that means moments of discomfort to learn and progress, then that’s what we have to do.”

She and the actors in “Vinegar Tom” also found this play to be very timely, considering what is happening in the legislature right now.

“These themes about a struggle for women’s rights are still relevant today,” freshman Jonathan Wells said.

His fellow cast member junior Rachel Honz agrees and says the themes of abortion and abuse are very timely. “Women on the outside especially are being victimized,” Honz said.

Her comment was made by others in the cast as well and a few have described how appropriate this play is after the Steubenville rape trial and North Dakota’s recent vote about abortion last month.

The play also questions what society knows as the norm for class and gender roles. Senior Theodore Coonradt, who plays Man in the very first scene of the show, says “Vinegar Tom” can help audiences question gender roles.

“It’s very important at Concordia,” Coonradt says, “because even at a strong female ratio school, I still see situations where women are being indoctrinated into a male-centric world.”

The women in the cast have been empowered to push boundaries of these gender roles. Some of these roles include a woman who has a child out of wedlock, a woman who is going through an abortion and girl forced to marry someone she doesn’t want to.

Senior Maggie Larrivee proposed her acting thesis on a play that would give her a role to challenge her in a way she hadn’t yet been challenged. She will be playing the role of Alice.

“She’s very dark and complex,” Larrivee said. “There is not a right or wrong way to play her, and she’s not necessarily good or bad.”

Alice is one of many women in the play who is accused of being a witch and must stand up for herself while being scrutinized by an entire group of people. One such person is a character named Jack, who is played by Wells.

“He is one of the accusers,” Wells said. “I have never played this much of a villain before, and it is hard to find empathy for such a character.”

Thomas picked the entire cast at the beginning of the year, but none of the students were assigned roles right away. Thomas wanted everyone to read the script together and do research. This way she says everyone was invested in all of the roles and not just their own.

“We need our comedies, but we also need to do our work,” Thomas said.

In addition to all of the tough themes the actors in this play must explore, the show has a musical element to it as well. Thomas describes playwright Churchill’s decision to add music as her inserting social commentary into various scenes.

“The modern songs stop the narrative action to have you question your place in the grand scheme of things,” Thomas said. “When we go to the theatre or the movies, we melt into the stage and don’t think until later about how this works into our lives. This puts the discussion in the moment.”

“Vinegar Tom” opened on Thursday, April 11, and it will run through Sunday, April 14, with show times at 8 p.m. (Thursday through Saturday) and at 2 p.m. on Sunday.