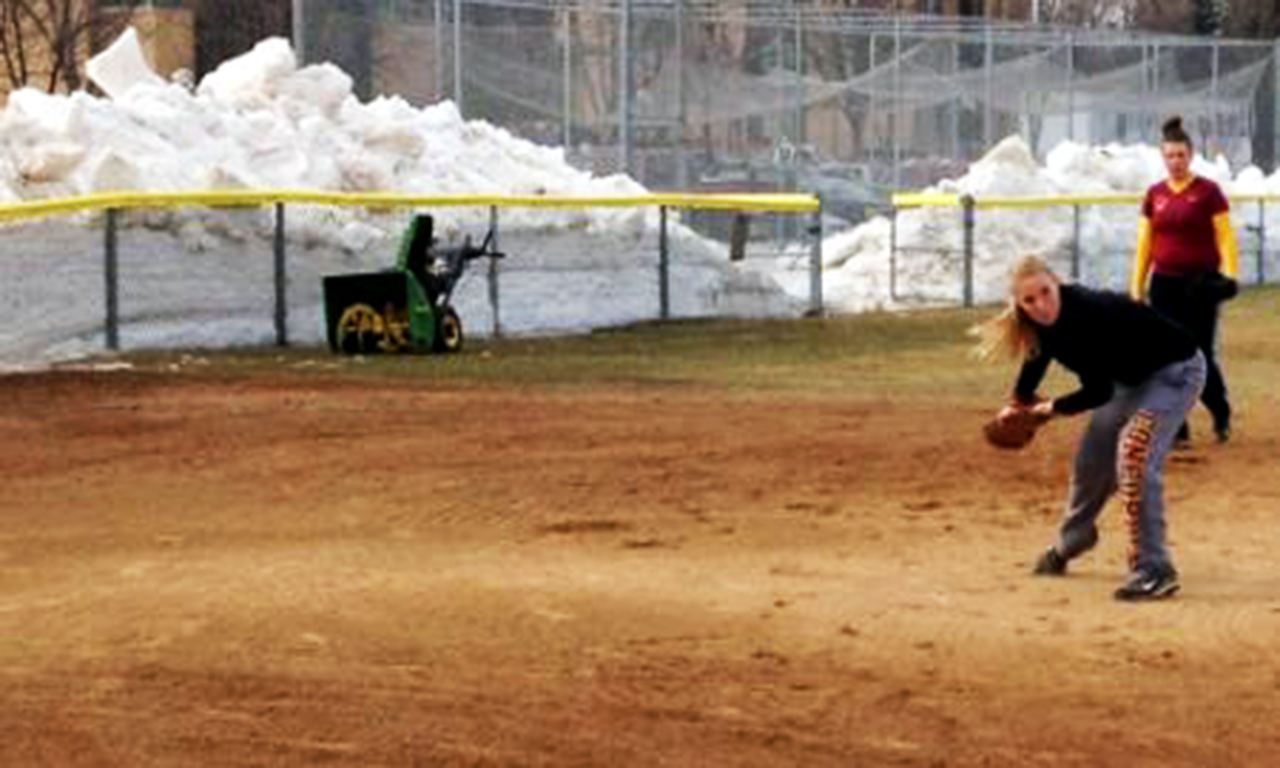 Calendars may say spring is here, but current weather conditions have members of Concordia’s softball and baseball teams begging to differ. Teams have been removing snow from the athletic fields and rescheduling practices to accommodate the weather. Though temperatures are rising, the teams are not quite in the clear yet, as they are now starting to prepare for the flood, sandbagging and rescheduling practices and games.

“We are running out of energy and time,” softball Head Coach Mike Reese said. “We’ve been having some short and long practices and indoor practices.”

Concordia’s baseball team had their first outdoor practice of the season on April 3, but they say winter weather continues to hinder them. Despite Facility Management’s effort to get the snow off the baseball field so that outdoor practices may proceed, outfielder Patrick Skogen said the team has still been removing snow.

He said the team spent an hour and a half last Monday shoveling snow off the field and into truck beds to be hauled away.

Reese said has had to alter his team’s schedule more than once this season because of the constant change in weather patterns.

“It’s a day-to-day thing,” Reese said. “We just finished shoveling the field, but now it is covered in snow again.”

Infielder Ashley Tibbets said the softball team has spent a good amount of their time indoors.

“We only got to practice outside yesterday (April 8),” Tibbets said.

Since conditions haven’t been in the baseball team’s favor, they have been traveling farther south to play.

“We’ve played three games in the Metrodome,” Skogen said. “There was no snow or water. The conditions were phenomenal.”

Instead of traveling, softball has stayed in the area helping the Fargo-Moorhead community prepare for the coming flood.

“We have been taking it day by day,” Reese said. “We either sandbag then practice or practice and then sandbag.”

The weather hassles have also put financial strain on the spring sports teams. Each year, teams are given a budget to use on travel and supplies. However, Skogen said that the budgets don’t factor extra expenses caused by the weather, such as having to travel to other venues because of poor conditions, and so teams are finding themselves strapped for cash.

“Its hard to plan for the budget if snow hits,” Skogen said.

Since weather conditions have been fluctuating this season, Skogen said baseball members have been glued to their phones, televisions and computers.

“We have to watch for email pertaining to practice,” Skogen said.

Reese said he is very proud of the softball team for trudging through this year’s long winter.

“I have the utmost respect (for) the students,” Reese said.

Reese has been getting together with other teams to see when missed games can be made up.

Reese has a lot of sympathy for this years seniors because they haven’t been able to play much this season.

“Its their senior season, and they aren’t able to do what they love,” Reese said.

Despite all of weather challenges the baseball and softball teams have had to deal with this season, both teams have persevered. From helping remove the snow on the field to sandbagging for the community to working with teams to reschedule games, the athletes have stayed focused and continued practicing. Now the rest of the season is in the hands of Mother Nature, and the team hopes she will allow winter to end soon.  Reese is rooting for her.