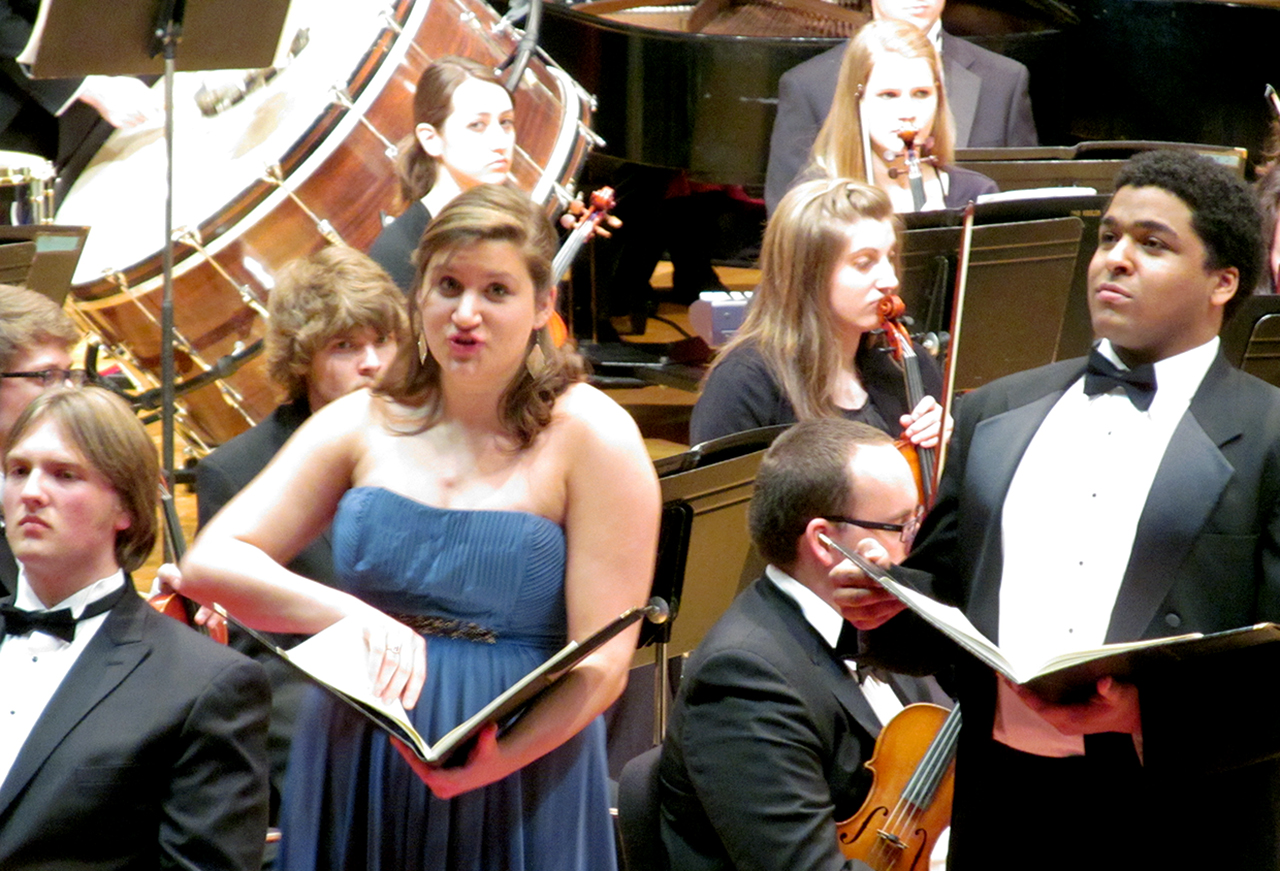 Concordia’s large spring concert, Oratorio, was especially unique this year. Usually, professional soloists are featured, but for the first time in years, the concert of Carl Orff’s Carmina Burana was performed entirely by students.

Rene Clausen, who conducted the Concordia Orchestra and the 350 member Oratorio choir, explained the basic concept of the concert.

“(Oratorio) is a large work, usually a half hour or more, (which is) considered to be for orchestra, chorus and solos,” he said. “Oratorio is that time when… we put all of our choirs together with the orchestra and do a major work.”

Though this is done every year, the concert had an added element to it this spring. Oratorio usually features faculty soloists for the production. Faculty did not partake in the concert this year.

“The vocal performance faculty all agrees that when we have the opportunity, it’s nice to give (the students) that professional engagement,” Clausen said. “We have decided to use students (this year) because we had such a high level of talent.”

Clausen said that the soloists give a professional dimension to the performance, and that the students are capable of the writing, even though it was written for professional vocalists. Thirteen solos were covered by eight students, including Erik Krohg, Chris Kenny, Anthony LaFrinier, Laura Pancoast, Jessie Braaten, Russell Wustenberg, Sarah Raeker and Justine Scarborough.

“I think they are incredible,” Dr. Clausen said. “It’s really something.”

The soloists, who all auditioned for the spots, likewise approve of the decision.

“It’s a really special opportunity for all of us,” she said. “I haven’t had much opportunity for solos in the past, so I’m just grateful for another chance to sing a solo in choir.”

While it is a great opportunity, Carmina Burana poses a challenge to each soloist.

“I have to be really bold with my singing, especially since it’s in my lower range,” said Scarborough. “My solo is singing over the entire freshmen women’s choir. It wasn’t something that I thought I could do.”

Raeker also found the experience to be humbling. “The other girls that got (solos) are fantastic sopranos,” she said. “It was cool to even be able to audition for (a solo) and to get it was even more cool.”

The audition process was open to everyone, but certain students were recommended by the voice faculty due to their vocal tone and capabilities. Soloists are chosen not on a basis of age or personality. Each solo is given to the voice which fits it best, according to Clausen.

“It has to be the voice that fits the music the most,” said Dr. Clausen. “That’s always the fairest way. What’s best for the music? What are the demands of the solo and who best fits those demands?”

As the audition process confirmed that the students fit the solos well, the decision to not use faculty members in this year’s Oratorio was maintained.

“The unique thing about this concert is that it is all undergrad,” said Dr. Clausen. “Every player, every singer, every solo, everyone in the chorus (and) everyone is the orchestra (are undergraduates). This is an entirely homegrown production. I think that’s an attainment right there.”