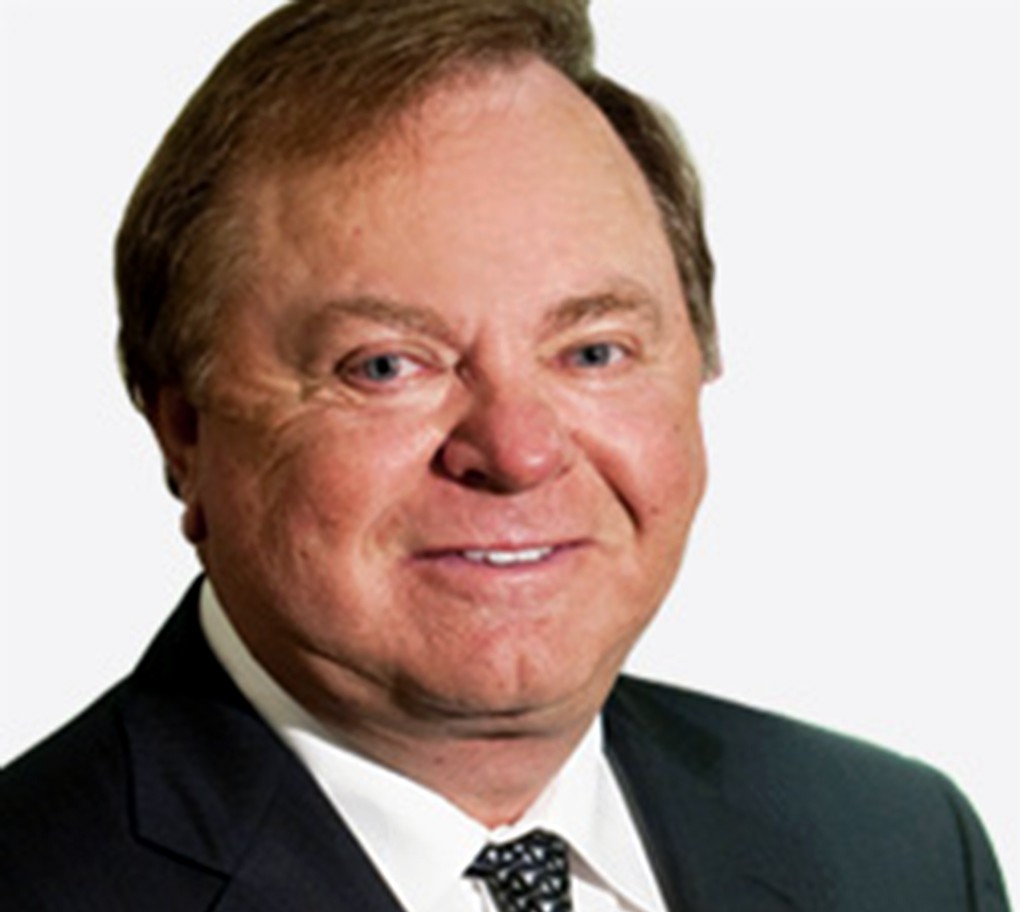 It was a lunch date that started it: the relationship between the nation’s 35th most wealthy individual and Concordia College.

On a beautifully blue-skied 70-degree day in April 2010, Concordia hosted an event called “Lunch with a Titan,” which was arranged to introduce local business leaders and politicians to Harold Hamm, the CEO of oil giant Continental Resources.

Dr. Greg Cant, dean of the Offutt School of Business, remembers this “typically Lutheran ‘let’s meet for lunch’” clearly.  “At the end of it Harold said, frankly, it was one of the best days he’d had in an extraordinarily long period of time,” Cant said.

Not only was Hamm impressed by the conversation with local VIPs, including several Concordia graduates and largest public donor Ron Offutt, but according to Dr. Mark Krejci, Concordia’s provost and dean of the college, Hamm was especially taken with the students. The business school organized a question and answer session for Hamm and around 100 students.

“(Hamm said) they are so engaged, they asked such good questions, they asked about fracking, and how’d you get your start,” Krejci said.

After his day at Concordia, Hamm’s friendship with Offutt and with the school took flight; now, he stands among a group of donors who have given more than half a million dollars to the college, and helped bring Bill Gates to the campus this weekend.

Hamm was born the youngest of 13 children in Lexington, Okla., and began his career in oil after graduating from high school. With one small loan Hamm started a one-truck oilfield service, but his intuition and risk-taking allowed his business to expand rapidly. Today, Continental Resources, self-branded as “America’s oil champion,” develops drilling operations in several states, including North Dakota and Montana where the Bakken field, a gigantic oil formation, exists. Hamm’s net worth is $11.3 billion, according to Forbes.

Improved technology and the advancement of hydraulic fracturing (or fracking) have sent the oil industry skyrocketing. Fracking, a process involving deep, horizontal drilling to reach layers of oil previously untouchable, uses rig machinery that injects fluids into the ground at high pressures. This fractures the shale rocks so the natural gas inside can be released.

The resulting economic gains for oil companies, including Continental Resources, have been significant. The Bakken, a giant oil field where Continental has erected multiple drilling operations, produces more than 700,000 barrels of oil per day; at the time of press, the trade price for one barrel was listed around $88. Additionally, the growth of the industry has contributed to low unemployment in North Dakota, which hovers well below the national average at 3.5 percent, according to the US Department of Labor.

However, fracking has recently taken a lot of flack for its unknown but potentially negative environmental impacts, especially where ground water and community infrastructure are concerned. Questions about ground water contamination and health implications have been raised. In the past two months, the North Dakota legislature has debated House Bill 1348, which would require oil wells to reside 1320 feet from any dwelling, as opposed to the currently stated 500 feet. No vote has been taken, according to the Bismarck Tribune.

Multiple calls to inquire about the hydraulic fracturing process at the North Dakota Petroleum Council, North Dakota Oil and Gas Division and Continental Resources offices in Tioga, N.D., Kildeer, N.D., and even the Oklahoma City offices resulted in a carousel of hold and transfer.

Some Concordia students have expressed concern about the environmental and social impact of oil exploration and Hamm’s involvement in the practice. Krejci said it’s possible that they haven’t considered the source of oil before fracking allowed the national industry to flourish.

“A lot of our students don’t realize what an environmental drain the places the oil was coming from were,” he said. He was referring to tar sands in Canada and refineries in Venezuela and Nigeria, and referenced a National Geographic article he’d read, which detailed some drilling operations in the Arctic Circle that seemed “abyssmal in terms of their safety records.”

“Then you take a look at fracking. It’s legal. It’s regulated. I’d rather have domestic oil produced in a regulated atmosphere than some of the oil that comes to us that isn’t regulated,” he said.

Members of the Concordia community hold varied viewpoints on Hamm’s chosen business, with some concerned about the environmental implications and others in support of his from-the-ground-up, capitalistic success.

With plans for the new OSB facility underway, the college set out with an ambitious fundraising goal of more than $50 million. A major campaign like this, Cant said, could not have been accomplished by alumni donations $1000 at a time, so they needed to reach out and find new sources. The goal was to finish the Grant Center building project without debt.

“When you build something like this,” Cant said, “you either have the money, or your borrow the money. There’s no magic money.”

Krejci said he is not aware of an official college list of individuals or industries Concordia would not approach with a donation request, nor is there a protocol that requires administrators to ask students about their opinions on certain donors.

“The reality is, your college education is being paid for by you, (the student), but also by donors,” Krejci said. “We don’t really go out to students and ask them to weigh in on whether or not we take money from this person or that person. I’m not even involved in that.”

In Hamm’s case, Cant thinks this was a case where he truly bought into the mission of Concordia. Despite the absence of any typical connection to the college (Scandinavia roots, Lutheran faith, or alumni status among them) Hamm made what Cant said was a decision based not on obligation or PR purposes, but on belief in Concordia’s vision.

“It’s the whole ‘your treasure follows your heart’ notion,” he said. “If you truly believe in what we’re doing and you have the capacity, then you’re likely to support us.”

While the financial contribution Hamm has shared with the college was integral to the completion of OSB, perhaps the most significant gift he gave Concordia occurred when he asked Bill Gates to visit campus for the dedication of the business school, which will happen Saturday.

Hamm is among signers of The Giving Pledge, a project created by the Bill and Melinda Gates Foundation, in collaboration with other philanthropic billionaires. The program invites the nation’s wealthiest individuals to give away 50 percent or more of their wealth. This helped link Hamm and Gates, which then helped connect Gates to Concordia.

In an email interview, Hamm said he had the idea to invite Gates to the campus because of its established legacy of preparing students to do great things.

“As someone who is taking on the world’s challenges and inspiring others to join him, Bill Gates will add to that legacy,” Hamm said.

“I respect his accomplishments,” he said, “and it’s my hope that his visit will spark the minds of Concordia students to also change the world.”

Cant points to Gates’ commitment to the OSB dedication as a unique gift that could never be replicated.

“No other person that we know could have said to Bill Gates, ‘Bill, I’d like you to do a favor for me. Come to this college I like and give up a day of your life,’” Cant said.

He believes that having industry leaders like Gates, Hamm, and Offutt present for the dedication positions Concordia in a unique role for national attention and additional prestige, and he’s thankful Hamm took the time to help orchestrate the event.

“On any given day, there are a hundred important things he could do,” Cant said. “A relationship with Harold isn’t a one-off. You really want to stay his friend forever.”

Cant and Krejci both agree that open dialogue on campus is welcome.

An ad hoc student group has collaborated with two off-campus groups to hold a panel discussion before the Gates event today at 4 p.m. The panel members include a Dakota Resource Council representative and a MN community member affected by pesticide drift.

They will further explore environmental and social questions surrounding fracking, pesticide use in large-scale farming, and sanitation waste worker conditions.

According to Kelsey Kava, an organizer of the event, Offutt has been the target of lawsuits involving pesticide pollution, while Gates has recently been scrutinized for holding more than 25 percent of shares in Republic Allied Waste Services, whose employees have been on strike for inadequate worker conditions.

“Unashamedly, Harold is in the petrochemical industry,” Cant said. “He digs up oil that gets turned into gasoline. He’s not ashamed of it, and all of us who drive cars probably shouldn’t be ashamed of it.”

With the current technology, few feasible options exist outside of using internal combustion engines for driving, which require gas, and therefore a continuation of the petrochemical industry. Cant, Krejci, faculty and students have all acknowledged the complexity involved.

“(There are) students who’ve seen a movie about water being polluted in Pennsylvania and think ‘wow, we’ve got to stop fracking,’” Cant said, “We should ask questions, but to poo-poo Harold about it is just frankly missing the point.”

Then, some might ask, what is the point? Caitlyn Schuchhardt, a 2012 Concordia graduate, will travel from Bemidji to campus for the panel discussion. For her, this conversation about the wider issues is vital to the future of the college.

“I’m disturbed that Concordia would uphold them as figures of success,” she said. “(But) I don’t want to sound like I’m entirely ungrateful for the money they’re giving.”

Schuchhardt said that if Concordia uses these connections to teach about social and environmental injustices, and not just gloss over the issues or mask them with the philanthropic successes of the donors, then she would feel better about their financial contributions.

“This is a huge game changer for Concordia right now,” she said. “That’s why I’m so nervous. And that’s why I’m so thankful for the students who are organizing events like the panel. It’s really critical for us to be engaged in dialogue.”

The panel discussion is open to the public and will take place in Jones Science Center 212 at 4 p.m. on Friday, April 26.
Gates will speak at 10:30 a.m. on Saturday in Memorial Auditorium. The ticketed event no longer has seats available.