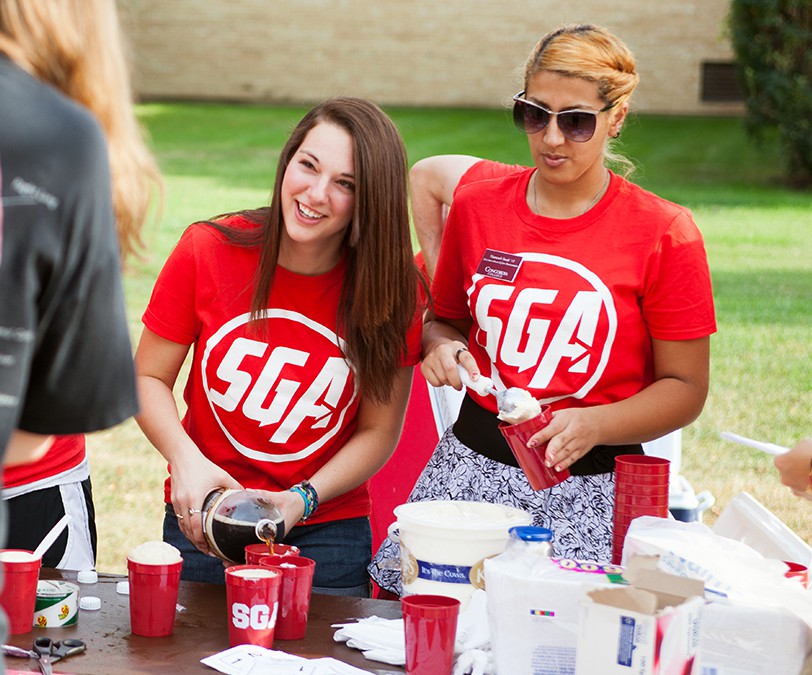 Student Government Association is slipping and sliding their way into the forefront of students’ minds at Concordia.

The organization hosted a Slip ‘n’ Slide on Saturday Aug. 31.  At the event, students could give their feedback regarding what they would like to see student government accomplish this year.

The idea was to have a fun event to kick off the school year, SGA vice president Matt Dymoke said.

A 100-foot strip of plastic, held in place by two rocks, covered the slope of Olin Hill as 150 students slipped, body surfed, and tripped their way down the sudsy slide.

Students enjoyed freeze pops and music from KORD radio throughout the afternoon.  SGA also had iPads, which students could use to give their feedback.

The slide may have been too big of a hit, though.

Rob Satterness, a junior who attended the event, admitted he wasn’t aware of the option to tell SGA what he wanted them to accomplish this year.  However, he said the organization is already more prevalent on Concordia’s campus than in years past.

“(Freshman year) I didn’t know what it was until elections that spring,” he said.

Students were given another opportunity to share their ideas and opinions on Tuesday Sept. 3.  Members of SGA manned a table in the Atrium throughout the day and asked students to stop by and take a short survey.

Four iPads, complete with matching leather covers and attached keyboards, lined the table where students responded to one question:  “What can SGA do to improve your Concordia experience this year?”

Although SGA received some responses at the Slip ‘n’ Slide the previous weekend, setting up in the Atrium drew in more responses from students, Dymoke said.

Students’ answers to the question ranged from a request for a new concert hall to installing blinds in Anderson Commons.

The general consensus among students, Dymoke said, was that they want student government to be more visible and to sponsor more events.

SGA president Levi Bachmeier said SGA wants to hear from the student body.  There will be ample opportunities throughout the school year to do so.

SGA will continue to host events, both formal and informal, to keep the lines of communication open between the organization and students, Bachmeier said.  Committee meetings, which happen every other Thursday beginning Sept. 12 at 9:15 p.m., are open to students who are concerned with the issues at hand.  SGA encourages students to attend these meetings.