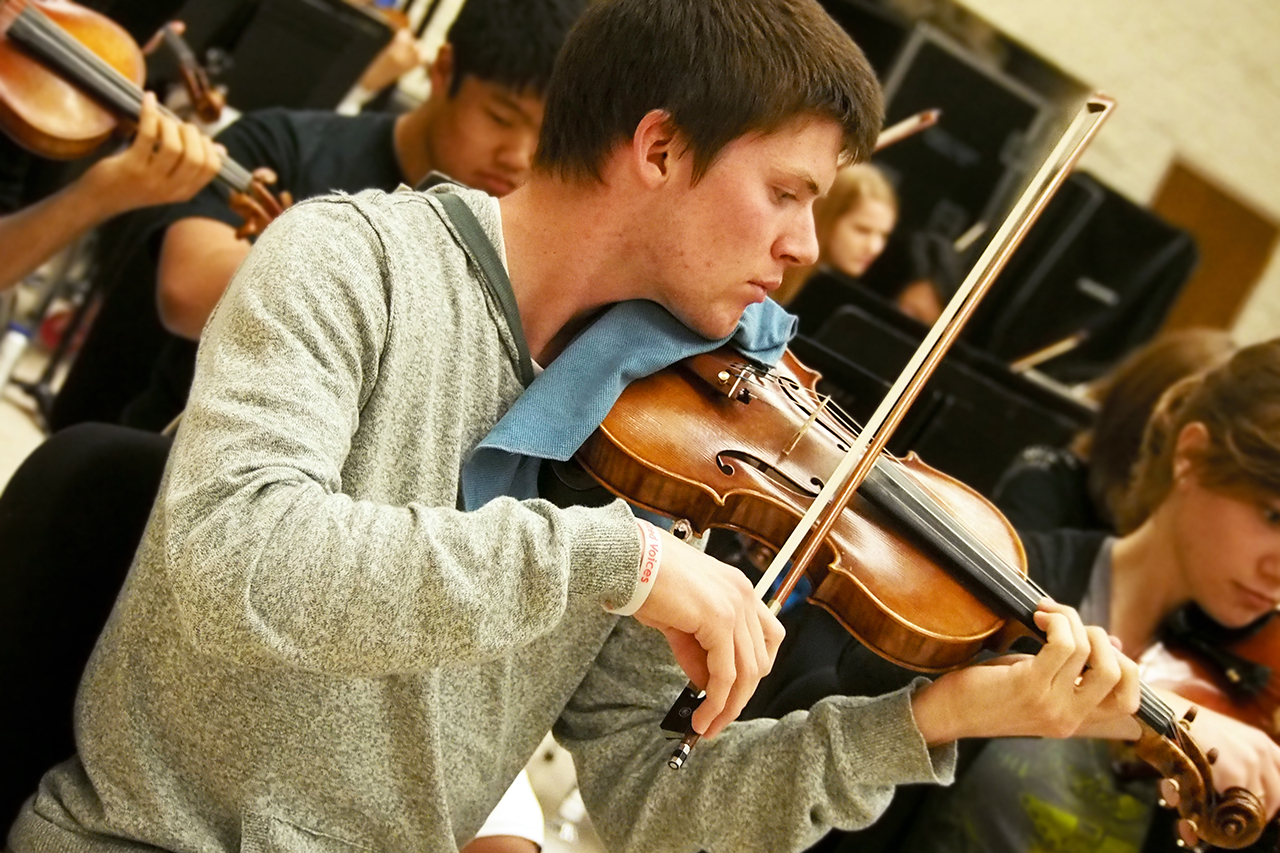 Freshman Hunter Huff Towle was just planning to show up to the first Concordia Orchestra rehearsal and taking his seat somewhere in the line of violins. But after the audition results were posted Sept. 28, a high school friend passed him on the sidewalk and congratulated him on making Concertmaster. Shocked, Huff Towle took off running for the music building.

Sure enough, Huff Towle’s name was labeled as first chair of the first violin section, making him the Concordia Orchestra’s new concertmaster. He will be Conductor Foster Beyers’ first freshman at Concordia to be the leader of the orchestra. Beyers has only worked with senior concertmasters in his two years at Concordia.

“Hunter was clearly the best player,” said Beyers. “He has incredible skill and technique and … has a very humble personality. He had all the right ingredients for a concertmaster, for a leader. It doesn’t matter if they’re a freshman or a senior — I’m looking for the person that can fulfill a musical leadership role. If it happens to be a freshman, that’s great.”

Huff Towle’s role will essentially be channeling the conductor as he tunes the ensemble and prepares them for rehearsals and performances.

Huff Towle, a Bismarck native, began playing violin when he was just five years old and played in a youth orchestra until he reached middle school, where he joined the school’s orchestra, and later joined his high school’s as well.

Although Huff Towle was looking at other colleges, Concordia’s music program interested him. After meeting with Beyers during his college search, Huff Towle learned he would most likely be able to play in the top orchestra here. He was awarded a Concordia music performance scholarship based on an audition held in January and eventually chose to attend Concordia.

Now at Concordia, Huff Towle is excited to be a member of such a high-caliber musical ensemble.

“This year will be the most amount of time I’ve put into any orchestra rehearsals,” said Huff Towle. “Before, we would only have rehearsal for about five-and-a-half hours per week.”

With the first few rehearsals under this chemistry major’s belt, he has already begun to settle into his new position.

“I was initially terrified. I’m just a freshman and there are upperclassmen and music majors (in the orchestra),” said Huff Towle. “I was ecstatic and terrified. But I’m confident in my playing, and I feel that I can do a good job.”

Beyers agreed. Not only does he have confidence in Huff Towle’s ability, but also in the rest of the new freshmen in the orchestra.

“Hunter is one of many freshmen this year that are strong, motivated (and) come very well prepared,” said Beyers. “I think they are going to raise the bar for us.”

Rachel Tisdale, a senior violin member, said that this year’s orchestra members have already blended well together. What the upperclassmen know to expect, the freshmen will quickly learn, she added.

“As a freshman, it could be difficult to determine what Mr. Beyers is looking for,” she said.

Tisdale helps answer many of those questions in her role as the orchestra’s manager.

As for Huff Towle, he will remain concertmaster until the next round of auditions at the end of the school year, and, depending on how the auditions go, could continue to hold the title on a year-to-year basis.