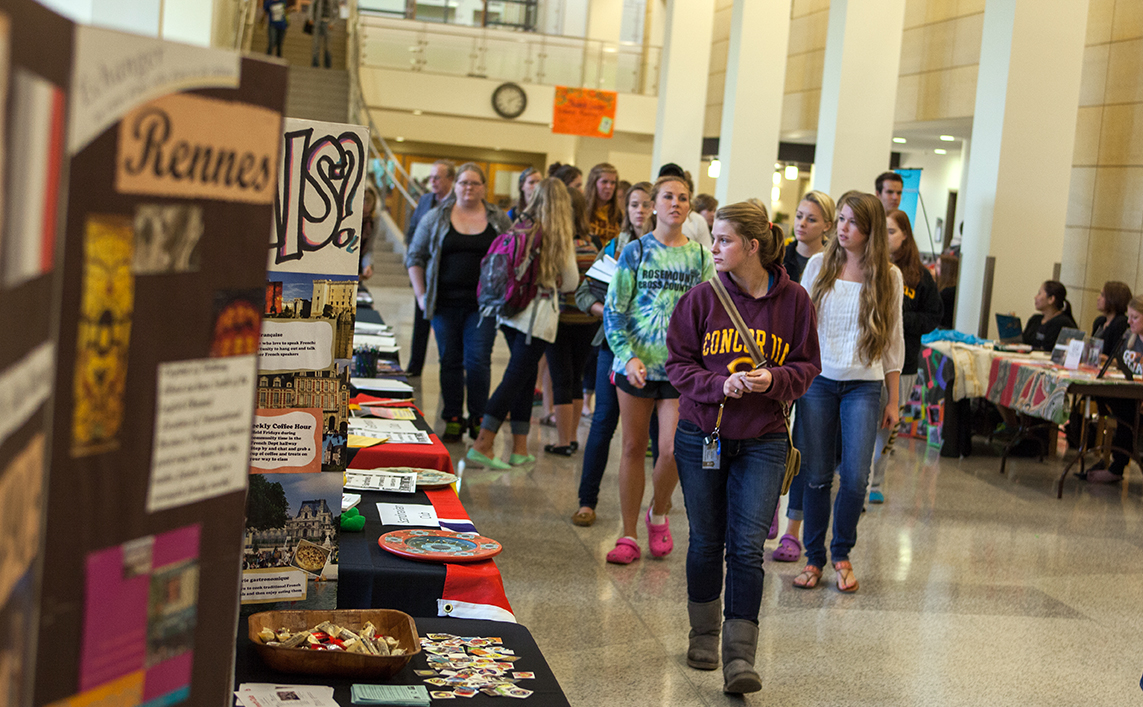 Students exploring study abroad opportunities gathered Sept. 17 at the Global Learning Expo to examine their options. These students now have an additional seven programs to choose from, which were added to the most recent roster of 35 programs.

Concordia offers a variety of study abroad options, including semester-long and full-year programs. There are Exploration seminars, which are about 10 days long and focus intensively on one subject, and there are several summer school programs offered in May and June.

According to Darin Stromstad, a program coordinator in the Global Learning Department, the student enrollment each year in study abroad programs has stayed steady, and there has even been an increase in enrollment for Summer Study Abroad programs.

“Every Exploration seminar last year was full enough to go. And the program to Tanzania, which was the most expensive, had 25 students registered to attend,” Stromstad said.

Even with the economy’s decline, students are still interested in studying abroad, according to Stromstad.

In the department’s update in November 2012, Concordia ranked 10th in the nation among colleges for the number of undergraduate students to study abroad short-term.

The same report stated that 583 students have participated in semester-long or full-year study abroad programs in the six years prior. According to the Global Learning Department, an average of 272 Concordia students participate in short-term study abroad opportunities each year, and numbers are on the rise.

Concordia’s reputation as a globally conscious institution is not new: according to a report released by the Concordia Global Education Department, Concordia was the 2006 recipient of the Senator Paul Simon Award for Campus Internationalization by NAFSA: Association of International Educators.

This award is presented to collegiate programs that offer excellence in internationalization efforts. The program’s practices, structures, philosophies and policies are examined in order to win the award.

Concordia is often spotlighted due to its number of programs and its push to allow students with complicated schedules to study abroad. The institution pushes trips after the school year’s end as a good option for busy students.

From May to June there are several options. The May seminars are a month long and more travel intensive, according to Stromstad. There is also Summer School Abroad seminars that are a week or two longer than May seminars. These programs focus on staying longer in one area.

According to Student Coordinator Joy Navratil, the programs offered in May through June have slowly gone up in popularity over the past couple years, but both options are fairly even in enrollment. Students do not seem to favor one length of program over another.

Duration is not the only issue students have to consider when looking into study abroad programs, however.

For Concordia Junior Kayla Rauchwarter, the cost of the summer programs deterred her, if only briefly, from attending a Summer School seminar in Santorini, Greece.

“Initially, the shock of the price had really turned me away,” Rauchwarter said, “but I really wanted to get out and explore.”

According to Rauchwarter, she attended the Santorini seminar because Summer School Abroad offers a more focused environment for certain courses.

“If you’re a person who has an interest in a certain class but it will be too difficult in the mix of a schedule, doing a focused seminar is perfect,” Rauchwarter said. “Being focused in the one class allowed me to enjoy it and learn more effectively.”

According to Rauchwarter, she will not rule out studying abroad again.