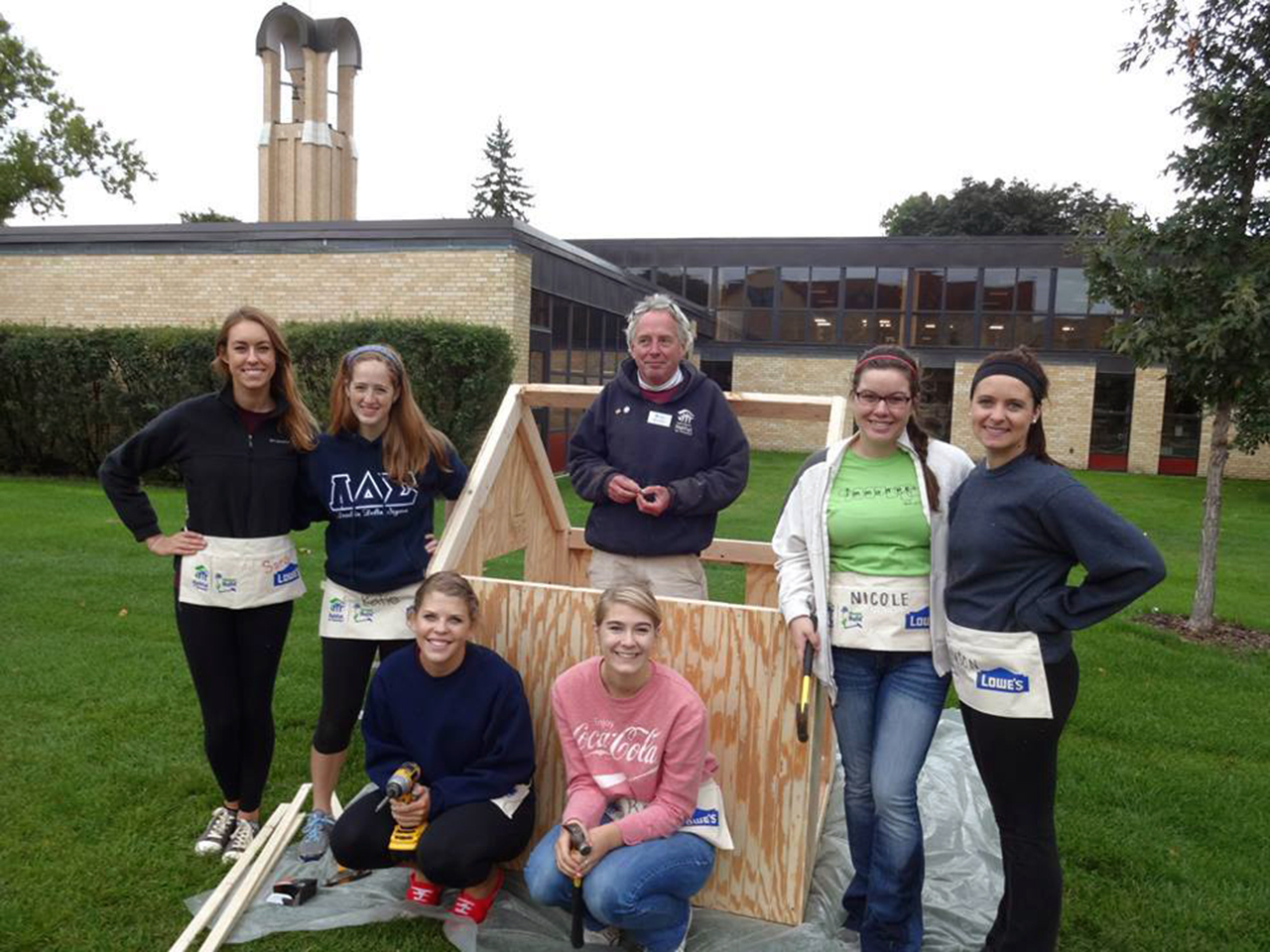 One tri-fold display board at Cobber Expo changed all that. In addition to being “really pink,” the booth’s board featured boa feathers, a touch of glitter paint and pictures of the organizations’ members at various group events, complete with captions describing each event.

The board was home to Lambda Delta Sigma, or LDS, which is the sole Greek society at Concordia. It boasts approximately 40 female members.

Before the Expo, Benders, now a sophomore and the LDS philanthropy coordinator, had never considered joining a sorority due to negative connotations associated with such organizations, such as excessive partying and hazing. After applying and eventually joining the organization, however, Benders discovered that LDS was different than other sororities.

“I really loved how they were focused on philanthropy,” she said. “We do one philanthropy event every single month as a group.”

Benders named philanthropy and general community service as the focal point of the group, with initiatives such as stocking shelves at the Great Plains Food Bank, caroling at Eventide and sponsoring the popular annual “Mr. Concordia” event, which raises money for a charitable cause, as just a few of the events planned for this academic year.

Junior Lexi Philbrick, president of LDS, has a similar LDS-discovery story. She also first found out about the sorority at Cobber Expo her freshman year, and she joined for the same reasons as Benders.

“There’s a zero-tolerance policy on drinking, and all of our events are dry. That really appealed to me,” she said. “It’s more about service and bonding.”

Although extensive bonding occurs within LDS, with one social event required per month in addition to the aforementioned monthly philanthropy requirement, LDS also regularly connects with several fraternities at NDSU.

“I think that because they are the only (Greek society) on campus, that can feel sort of isolating,” she said. “(T)hat connection with NDSU . . . can provide some of that added larger community sense of ‘We’re all Greek; we all chose to be involved with these groups together.’”

A unique component to this tri-college Greek affiliation is the LDS “ladies man,” a position reserved each year for a member of an NDSU fraternity.

“We elect the ladies man,” Benders said. “(H)is job is basically to be a connection for us between NDSU and Concordia, so he’ll talk to the frats about what we’re doing and he’ll talk to us about what the fraternities are doing.”

“He gives us tips on how to fundraise here and how to do publicity . . . (H)e’ll (even) shovel our driveways and that kind of stuff,” Philbrick added.

For the females of LDS, becoming a member requires an extensive application process, known as Rush. Those who visit LDS at Cobber Expo can sign up for an interest meeting, and Rush begins soon afterward.

“It’s two weeks of almost an event every single night, and it’s a time for those girls who are interested in LDS to come hang out with us and meet us,” Benders said. “We go bowling; we go out rollerskating; we have cheese and crackers night where we all dress up, and then they have to interview.”

After these two weeks, select rushers receive a bid and undergo Pledge Week, after which they have the opportunity to become full-fledged members.

“(P)ledge . . . is another week of something every single night, and that’s just a little more secretive; we don’t like to talk about that as much,” Benders said.

When combining LDS’ Rush experience and NDSU Greek life affiliation with its dry-campus home and special emphasis on service, LDS constantly experiences a bit of an identity crisis. It embraces some traditions of Greek organizations while simultaneously not considering itself a “typical” sorority.

Philbrick and Benders do not hesitate to use the term “sorority” to describe LDS–this parallels the name that is often colloquially attributed to LDS by Concordia students: “The Sorority.” However, Kenfield specifically describes LDS as a “society,” and LDS’ student organization description on the Concordia website uses the terms “society” and “philanthropic society” with no mention of LDS being a sorority.

When one more deeply examines the LDS aesthetic, however, it becomes apparent that the organization is not believed to be a typical sorority by its members and, the fact of the matter is that LDS is not a true sorority, a description that is embraced by its members and adviser.

“We don’t have a national organization we’re a part of, whereas other sororities . . . have a charter, which means there are different sororities around the nation and they pay dues to the charter,” Philbrick said. “(O)ur dues go to our funds . . . We’re the only Lambda Delta Sigma in the nation.”

Beyond the lack of identification as a national sorority, there are other traits that differentiate LDS from typical Greek life.

“(O)ne thing that’s different about LDS as a society on our campus is that they don’t have a house,” Kenfield said. “They’re not all living together; it’s just that they choose to come together for meetings and their activities they have planned.”

“When I hear the word sorority, there’s the stereotypical ‘women dressed in pink having a pillow fight’ like those college movies that you see,” she continued. Instead, Kenfield views LDS as an outlet for young women to “have a chance to . . . practice leadership skills and practice community service out in the community.”

It is because of this lack of identity as a typical sorority that Benders joined LDS in the first place.

“To me, we encompass the good things about a sorority and not the bad things about a ‘real sorority,’” she said. “(W)e’re a strong sisterhood, we do philanthropy, (and) we are independent women who are proud of our society.”