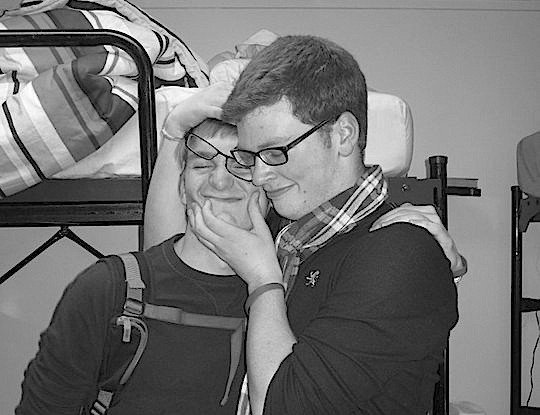 Scarf Boy had found home at Concordia, that much was sure. People cared about him and his well-being and made that apparent from the minute they started interacting with him. They indulged his constant chatter regarding which Eric Whitacre song was the best, which boy on Glee was the cutest and, of course, which scarf went with his outfit.

The fact that “people” cared about him, however, seems broad. Were they professors? Classmates? Custodians? The answer is all of these. Scarf boy met a professor so caring they met outside of class for coffee and talked about the turmoil in Scarf Boy’s life. He met a custodian who chatted with him in the Hoyum Floor 6 bathroom every Monday, Wednesday, Friday at 10 a.m., asking him how college was treating him and if he needed anything. Plot twist: The only thing he needed was to not have a conversation while half-naked in a public bathroom. He also met classmates. So. Many. Caring. Classmates. The people he met within the first days of school became some of the best friends he’d ever had. One classmate in particular, however, changed the way Scarf Boy viewed his campus, his career path and himself.

Scarf Boy met White Horse on the first day of Orientation. They were both in Club 24–Cool to the Core!–and bonded instantly over their mutual disgust with people discussing ACT scores. This bonding grew at the Welcome Show, when a formative performance of “Fever” made Scarf Boy and White Horse LOL for months afterward. Instantly, friendship was born.

A little over two months into their friendship, something happened that neither Scarf Boy nor White Horse could have prepared for. Still in the budding stages of new friendship, a tragedy turned Scarf Boy’s entire life upside down. He received a text from his high school best friend, threatening to take his own life. Anxious, Scarf Boy called the Mankato Police Department to report a potential suicide and silently prayed this was just a cry for help. It wasn’t. Scarf Boy received a call from his mother around 2 p.m. on Nov. 8, 2010. His friend was gone. Scarf Boy was in a new city, at a new school and surrounded by new and unfamiliar people. He was crushed, unable to articulate the hurt and guilt he felt. He knew he couldn’t be alone but didn’t know who to turn to.

He turned to White Horse.

They met outside Livedalen and Scarf Boy laid on White Horse’s futon and wept. White Horse sat quietly with him, rubbing his back and telling him he was sorry. It was all he could do, and it was enough.

The grand reveal: I am still Scarf Boy, and Dylan Jones is White Horse. This nickname stems from his performance of Taylor Swift’s “White Horse” at Frosh Frolics three years ago, which was epic.

Every day I am grateful that I had Dylan to comfort me when I needed it most. I never could have predicted what my freshman year would bring, but I can accept the results as having changed the rest of my life. I viewed campus as a place for self-discovery, acceptance and support even in the worst times. I viewed my career path as a way for me to pursue what I was passionate about, not what others told me I was good at. I viewed myself as an agent for change, as someone who would give to the world as much as he was taking from it. I never could have learned these lessons without the connections I made here.

As we move into our futures, be it as Cobbers, family members, colleagues or acquaintances, it is crucial to remember that diversity comes in all different forms; in race, gender, sexual orientation, religion etc. but also in life experience, hardship, struggle and revival. Hearing you say the test you took makes you want to kill yourself still hurts three years later. Be aware of what you’re saying and don’t discount the experiences of others. Grief and struggle, like any other form of diversity, require our tact and respect.

In order to extend the conversation regarding grief and how to cope with it, I encourage everyone to attend “Life after Loss: A student panel,” which takes place Thursday, Sept. 26 from 7-9 p.m. in Brown Unit 1. I was not involved in the creation or implementation of this event, but I look forward to seeing the ways in which it benefits the campus community. This is an amazing method by which to engage in the hardest dialogue of all: that of loss.

Scarf Boy didn’t “get over” the death of his best friend. He is stronger for it but could never have handled it himself. The people he met here and the love he experienced allowed him to grow from the grief into something greater. Losing Tyler broke me, but Dylan, this school and the support I received gave me the tools necessary to become whole again.