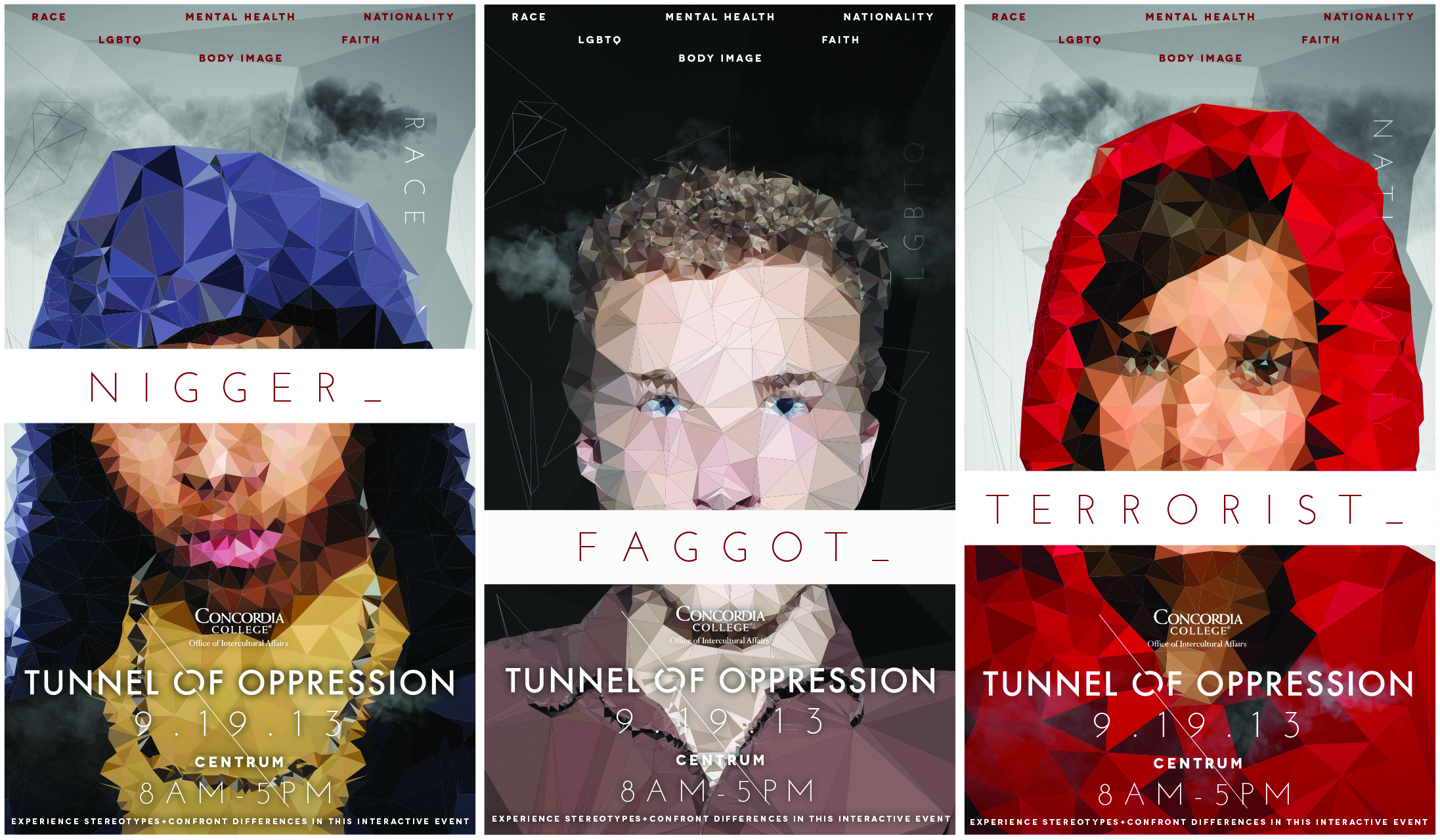 The Tunnel of Oppression presented by Intercultural Affairs last Thursday has elicited critical remarks from students who disagreed with its grouping of minorities into broad categories. The most vocal critiques have been toward the Tunnel’s depiction of race issues.

The Tunnel of Oppression’s goal was to bring everyday oppression to the forefront of students’ minds with facts and testimonials regarding the oppression of minority groups or oppressed peoples.  The interactive event was structured around underrepresented populations, body image, interfaith, LGBTQ issues, international populations and mental health.

“We wanted students to understand the culture around them in a different way,” said Sonja Paulson, assistant director of Intercultural Affairs. “We wanted to break down the Concordia bubble a little bit.”

A darkened Centrum held a walking path for students as they read, watched and listened to information presented by members of the Concordia community. The path divided the information into segments, each focusing on broad categories of oppressed peoples, with references to issues both on and off campus.

“A lot of people believe oppression only happens in places like Russia and Africa and not on campus,” said Geneva Nemzek, co-president of Concordia’s Straight and Gay alliance. “It’s important that we’re drawing attention to oppression on campus.” Nemzek helped organize the LGBTQ section of the event.

Susanna Lu, assistant director of Intercultural Affairs, was the lead organizer of the event. She stated that it is logistically very difficult to represent every minority subgroup. Additionally, stations were largely left for students to approach their topic however they wished.

Paulson commended SAGA on their disclaimer that their station was not entirely representative of all struggles of the LGBTQ community. Intercultural Affairs also published a disclaimer that not all subgroups were to be represented.

“The Tunnel of Oppression aims to raise issues that various populations face both on and off the Concordia campus. Outcomes include heightening awareness, developing empathy and understanding perspectives of others. The Office of Intercultural Affairs recognizes that station portrayals are not inclusive of each subgroup,” reads the Tunnel of Oppression information sheet.

Courtney Gasner-White, vice president of Concordia’s Black Student Union, was deeply critical of the way in which the underrepresented populations section was portrayed.

“There’s a belief on campus that all brown people are the same,” Gasner-White said.

While she believes that Intercultural Affairs had good intentions surrounding the event, she thinks the event furthered the assumption that “brown-skinned people are a monolithic group.”

Gasner-White believes the event did more harm than good.

“In this case, good intentions really are paving a road to hell,” she said.

The discussion around the Tunnel of Oppression shows that the event did what it was supposed to do: raise awareness and spark debate, Nemzek said.

The Tunnel of Oppression is not unique to Concordia. Initially staged in 1993 at the Western Illinois University, campuses across the country have adopted the event. Each campus has the liberty to do with it what it wants, whether that is bringing the focus primarily to issues on campus or in the nation as a whole, according to Lu.

Concordia’s portrayal of the event reflects the campus environment, according to Gasner-White. She pointed to low numbers of black faculty and students as being demonstrative of a larger culture that is only truly welcoming to whites.

“White privilege is a thing that permeates our culture in every instance,” she said. “The Other is all the same and don’t get to be ‘normal.’”

Posters promoting the event also drew criticism. The posters featured a derogatory term over the blurred portrait of a person ascribing to a minority.  They were designed to confront common stigmas with frequently used words, as well as draw attention by being controversial.

Terrorist, Nigger, Faggot, Fat, and Psycho were used on the posters.

Using these terms for the sake of discussion is not acceptable, according to Gasner-White.

Alexander Hines, director of inclusion and diversity at Winona State University, spoke last spring on the use of the term “nigger.” Because of the recency of the event, she says that Intercultural Affairs should have known that the use of the term is unacceptable, even if used to create discussion.

“It was very clear in the presentation that the use of the ‘n word’ is unacceptable, due to its extraordinarily violent background,” she said. “Especially next to words like ‘fat’ and ‘psycho’ that don’t have similar connotations at all.”

Lu and Paulson think the posters were successful in drawing attention to the event,  as approximately 500 students, faculty and staff attended the event.

Intercultural Affairs considers the event to be a success. The amount of debate and discussion surrounding the event confirms that it needed to occur, according to Paulson.

“We don’t want a campus with absolutely no disagreement– then we couldn’t improve,” she said.

Lu and Paulson stressed the importance of student feedback in order to improve the event in years to come. They are still seeking out feedback, urging students who would rather stay anonymous to write to them through campus mail.

Intercultural Affairs received feedback at the end of the Tunnel of Oppression, where students were presented with a chance to write their thoughts on a canvas, light a candle in recognition and to give feedback on the event.

“Everyone has their own stories and demons, even me. This raised awareness and encouragement within me, as well as many others. Thank you,” wrote one student.

Several comments asked for more extensive information in some sections, and many asked for other oppressed peoples to be represented, including students coming from low socioeconomic statuses and the disabled. Some critiqued the campus culture.

“Let’s be real, Concordia is chock full of privileged people who maintain that they are ‘different’ and that they love everyone. I wish there were more quotes from students who were under oppression. The amount of hate I get on campus for my size, gender, sexual orientation and income level disgusts me,” wrote one student.

Beyond feedback, Lu and Paulson want students with critiques to get involved with the event in years to come.

“It’s so important to have so many voices present,” Paulson said. “Different Concordia students struggle in different ways and with different things.”

Nemzek said that this event is a good way for students to start talking about discrimination and oppression. Many students outside sociology do not frequently talk about oppression, and this event was meant to get those students to learn and discuss more about what minorities face on a daily basis, she said.

“Oppression comes in so many shapes and sizes,” Nemzek said. “This tunnel is for people that don’t realize that oppression happens all the time. It might not be perfect, but it did what it meant to do: raise awareness.”