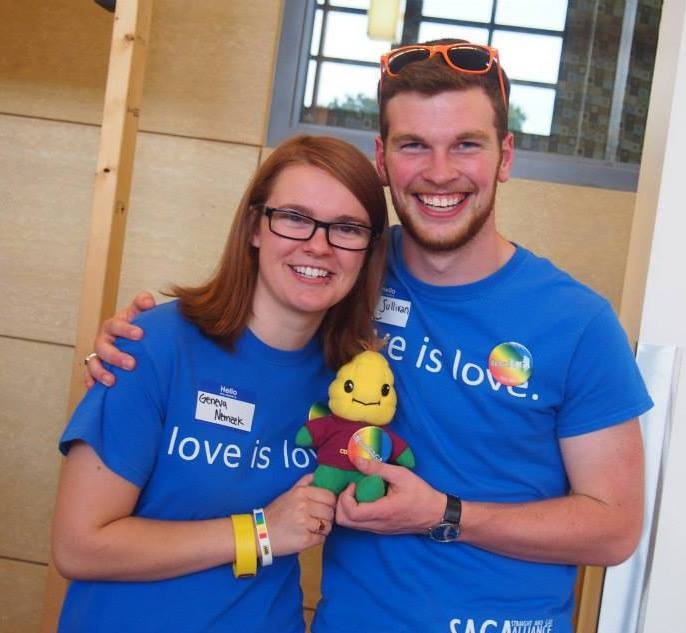 Lip Ring Lady has not always been out of the closet. In fact, she spent a good 18 years camped out in there. When she came to Concordia, she started to slowly come out to her close friends, and everything seemed to be going pretty well, all things considered. Although she lost a couple friends in the process, people around her were overwhelmingly accepting, which helped her grow more comfortable with herself.

Last semester, Lip Ring Lady went through a rough breakup. Although she does not like to admit it much, she slipped into a bout of debilitating sadness, which affected both her classroom attendance and her academic performance. When Lip Ring Lady finally mustered the courage, she emailed her professors and explained her situation in the best way she could. She was pretty nervous to hear back, afraid her sadness was not a good enough reason to be missing class and underperforming on the days she showed up.

What she got, however, was a beautiful testament not only to the compassionate and understanding professors on campus, but also to how crucial allies are to the LGBTQ community. Her Religion 300 professor sent her an email explaining how she understood her struggle, that same-sex breakups can be particularly isolating, and offered her office as a place for Lip Ring Lady to unload if she ever needed it. The response made Lip Ring Lady weep, and soon after, she slowly started to heal and eventually picked her grades back up.

Without allies, Lip Ring Lady would be in a very different place today. She would not be confident in her own self and sexuality, she would not feel an abundance of love every time she stepped foot on campus and she certainly would not have done well in her classes last semester. Without allies, Lip Ring Lady may have slipped further into her sadness after her rough breakup, into a place difficult to return from.

Proceeding a different way, Scarf Boy’s trip out of the closet was more like that scene in Westerns where the badass cowboy kicks open swinging doors to a saloon – replacing the saloon with the Atrium, kicking with gently pushing, cowboy with Scarf Boy and Western with a tasteful 21st century musical. Regardless of his “I’m here, I’m queer, get used to it!” mentality, Scarf Boy needed just as much ally support as Lip Ring Lady. If you need to hear a story about him being supported by allies, read any of the other Scarf Boy tales on the Concordian website.

You guessed it, there is a plot twist: Scarf Boy is Colin. Lip Ring Lady is Geneva Nemzek. SAGA co-presidents, what up!

When planning this year’s National Coming Out Week events, we realized that the week has been heavy on the LG and pretty lax on the BTQIA portion of the acronym. Seeking to validate the previously unvalidated, we made a couple of structural changes:

First, we made a trans* awareness day. Just because our trans* population is not incredibly high on campus does not mean these students and the issues they face daily are not worth recognizing; in fact, it makes them more important. Join us Thursday for some information in the Atrium, along with a movie and dialogue at 9 p.m. in the King Intercultural Center.

Also, we created “Hug-an-Ally” Day on Friday, which we assumed would yield a bit of controversy. The inclusion of these people is simple; the movement would be nowhere without them. Yes, it is crucial to empower members of the LGBTQ community to spark their own change. Yes, it is essential to remember that privilege based on sexual preference or gender identity is institutional and worthy of our critical analysis. However, it is also vital we recognize those who throw themselves into a fight in which they have no individual stake. They may have friends, colleagues, family etc. who identify within the community, but they themselves experience no personal backlash to LGBTQ discrimination. They do not know the pain, they do not know the hurtful words, they do not know the coming out stories, they do not know the heartache.

But they still fight.

Scarf Boy and Lip Ring Lady are two strong people with a desire to make the world a more inclusive place. They would not have been able to do any of this without the amazing and supportive allies in their lives. From the closet to the SAGA presidency, we are still reliant on the allies in our lives. Anyone willing to fight on our behalf is someone worth celebrating.

This column was written by Colin Sullivan and Geneva Nemzek.