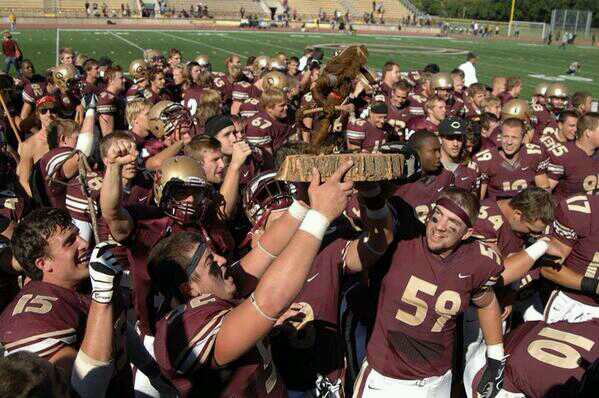 Along with a fourth consecutive win, the cobbers keep The Troll until they face off against St. Olaf next year

The Cobbers are on a roll, taking down yet another team to put their record at four wins and zero losses for the 2013 season. On Saturday Sept. 28 they defeated St. John’s 24-14 at St. John’s.

Saturday Sept. 21 was also a huge day for Cobber football against the St. Olaf Oles.  Despite Saint Olaf’s lead at the start of the second half of the game, Concordia finished on top with an end score of 33-29. This win was a huge accomplishment for the Cobbers. Not only did they successfully beat the Oles, but they also kept hold of the troll.

Introduced in 1974, the troll has been passed on between the Cobbers and the Oles for the past 39 years. According to senior Ben Tamm, Concordia purchased the troll from Norway for $150.

Tamm has played for the troll trophy four years in a row. Three of the four years the troll has stayed at Concordia.

In order to ensure the troll stayed at Concordia, Tamm and his teammates watched the Oles’ loss against Luther and got some good insight into their weaknesses.

“We saw Luther played the same offense as us,” Tamm said. “We exploited what we saw on film. We noticed they didn’t pass the ball and used this as an advantage.”

Before the game on Saturday, junior Domenic Fraboni and his teammates had a little pregame feast.

“We have a lefse bowl on Thursday put on by student affairs,” Fraboni said. “It’s a cool tradition to have.”

Junior Griffen Neal thinks the troll represents more than just the victory against the Oles.

“The troll means a lot to my teammates and myself,” Neal said. “Coming in as a freshman and hearing coach Horan constantly talk about it and seeing how badly he wanted it back in his office was really inspiring.”

Tamm felt that making sure the troll stayed at Concordia was a big team effort.

“We did really good during the first half,” Tamm said. “Our defense had a little hiccup but turned back around during the second half.”

This year’s Ole and Concordia game took place on the Saturday of College Game Day.  With the troll being up for grabs again, ESPN talked about the special game prize during their college day special.

“It was cool getting Concordia recognition,” Fraboni said.

“It was a really cool experience to hoist it up and sing to the crowd,” Griffen said. “You could tell everyone was a little more excited than they would be with a different victory.”

“Our main plan was to keep the troll at Concordia,” Fraboni said.  “Keep the troll, defend the troll.”

After the game ended, Tamm and his teammates began celebrating their victory.

“It was wrapped in a trash bag on the other side of the field, we ran and grabbed it,” Tamm said. “We brought it to the crowd and sang the school song. A bunch of us took photos with the troll as well.”

Neal feels this particular win will help the team stay confident throughout the rest of the year.

“It lets guys on our team know that we are contenders and anything is possible,” Neal said. “In the grand scheme of things this is just another game on our journey.”

With the troll still at Concordia, Fraboni hopes this victory continues for years to come.

“It feels good to have the troll here for a second year,” Fraboni said. “We want to keep it here for a few more.”