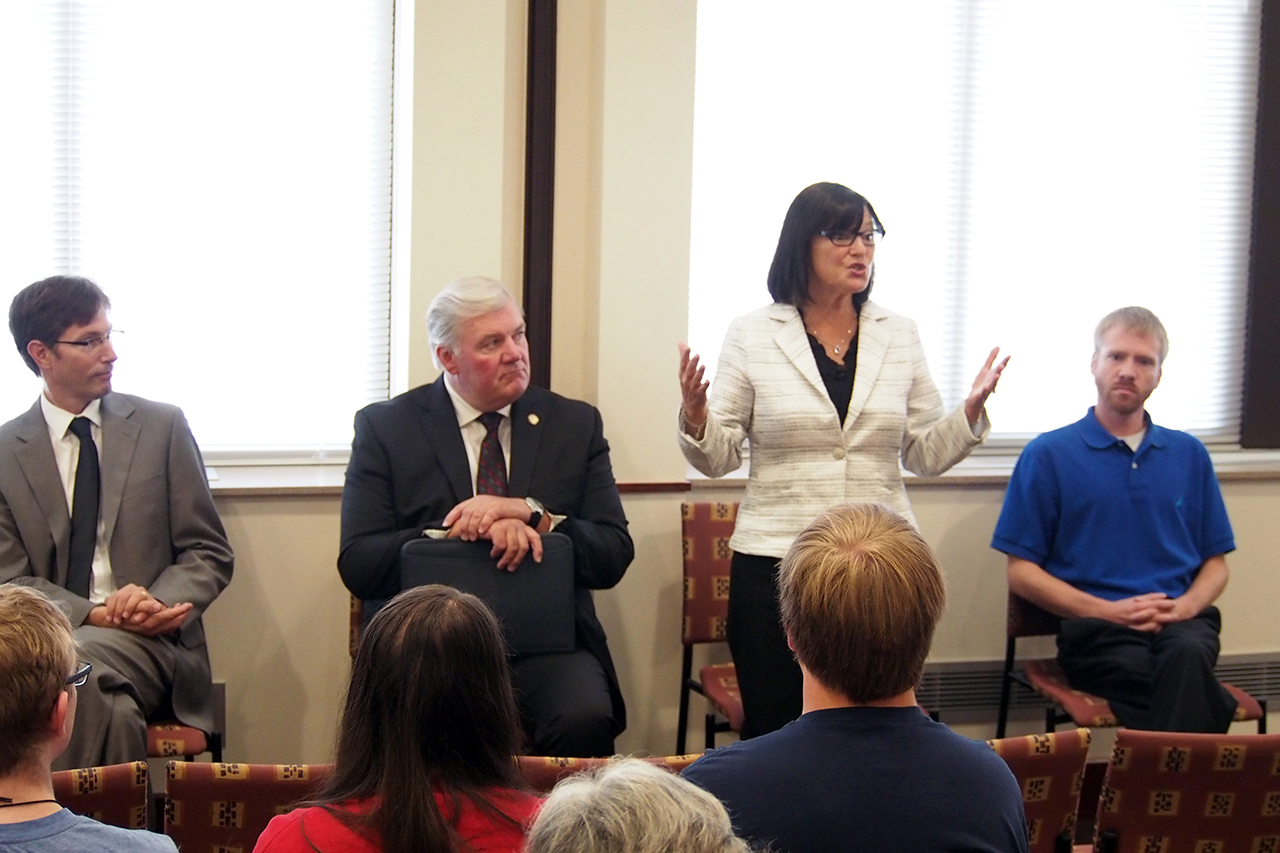 A roomful of hands shot into the air when Minnesota legislators asked how many Concordia students in the room were carrying debt.

As part of a month-long tour of 18 Minnesota Colleges, Minnesota legislators visited Concordia on Sept. 24 to understand student assets, resources and demographics through individual student stories. The legislators wanted to get a sense of students’ financial situations and understand how to help students cope with growing student debt levels.

Both state and local representatives were present at the meeting.

“This is for you,” said state Sen. Greg Clausen to students attending the meeting. “We want to listen to you.”

Clausen said he believes higher education can change lives. In addition, he said an educated workforce benefits the economy. By helping students pay for college, the government invests in the state’s future.

Students who attended the meeting expressed that they are having trouble making ends meet. They shared stories of looming debt, of parents hesitant to let them attend private school and of the hours spent working. At the meeting, a sophomore explained she balances being a full time student with four jobs in an effort to pay tuition.

Eric Eliason, the dean of the college and vice president of academic affairs, was proud of the way Concordia students contributed to the meeting.

“I think they were well heard because the students spoke well,” Eliason said. “The legislators got a good representation of the things on the students’ minds.”

Ryan Deschene, president of Campus Democrats, believes the meeting was helpful in breaking the stereotype of private school students having little or no debt.

“I was surprised and happy with the stories that students told at the meeting,” Deschene said. “Those stories broke the stereotype.”

Deschene believes there is a stereotype that Concordia students come to a private school because they have enough money to easily afford it. In reality, Deschene thinks Concordia students simply make education a priority over debt.

“I think a lot of our students work really hard to be able (to attend college),” Deschene said.

Deschene was not alone in his opinion.

“There (are) a lot of students having to work more and more because of education costs,” said state Sen. Kent Eken.

Students who shared their stories made a point to thank legislators for the available financial aid grants. All found them helpful and some necessary in order to receive higher education.

They are also looking into the possibility of debt forgiveness for college students who do two years of public service, such as through Peace Corps or AmeriCorps.

“I do think we could get people interested in utilizing the power and commitment of our youth,” said state Sen. Terri Bonhoff, chair of the Minnesota Senate Higher Education Committee.

Legislators also hope to maximize other opportunities as well, such as increasing the number of paid internships in the state, pushing free online courses as an addition to college education and utilizing better career exploration in both high school and college. They hope such action will equip students to get a better education for a bit less money.

Clausen specifically hopes to see the number of unpaid internships decline. He agrees with recent legislation which rules that free labor takes advantage of the intern and is unlawful.

With these legislators wanting to help students better afford college, members of the Concordia community were glad to have been given the chance to voice their input.

“This committee has really been an advocate of something that can increase access to higher education,” Eliason said. “We were thrilled that they came.”