Now showing: ‘The Importance of Being Earnest’

By: Alex Gray
In: Featured, People, Theatre, Variety
Tagged: Concordia Theatre, Lab Theatre, The Importance of Being Earnest
With: 0 Comments 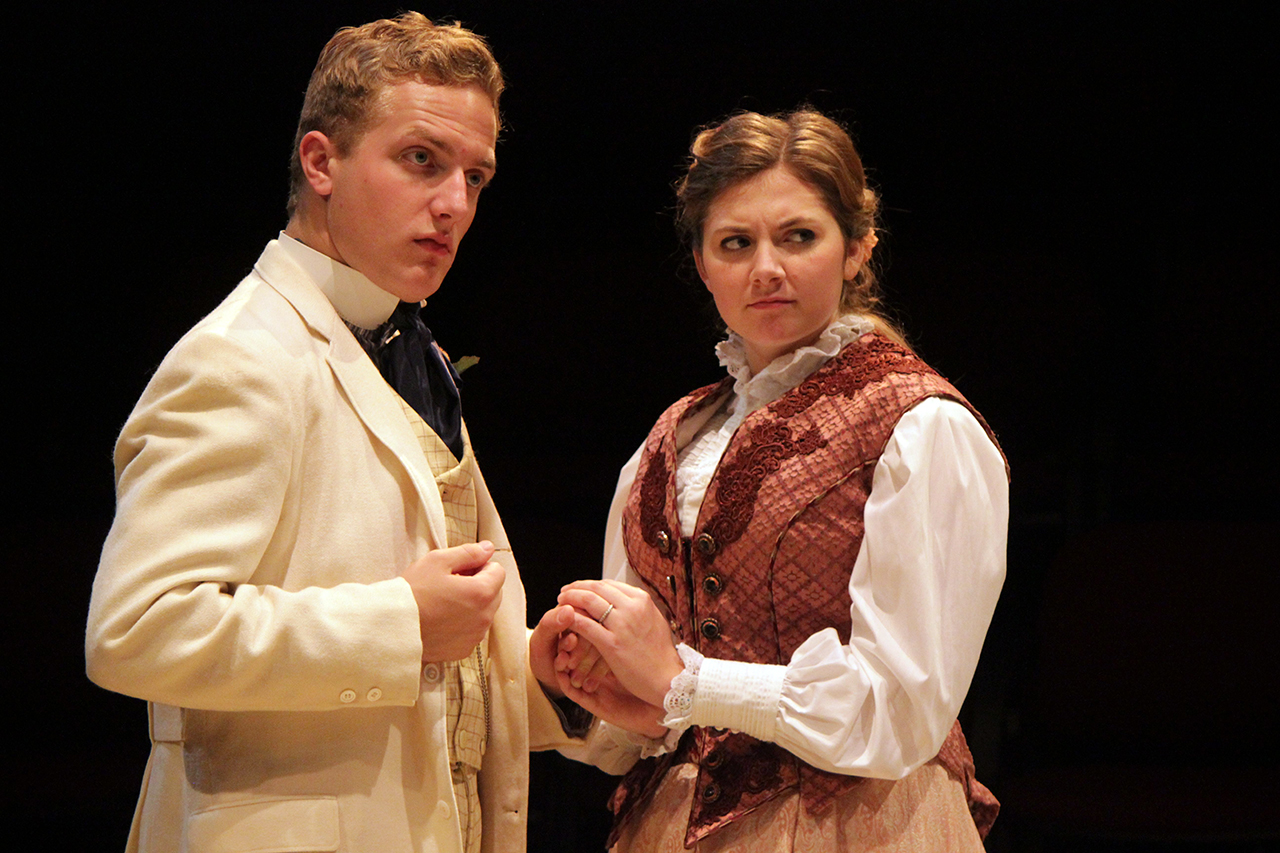 This week a classic English play is taking the stage at Concordia.

Oscar Wilde’s “The Importance of Being Earnest” follows Englishmen Jack Worthing and Algernon Moncrieff, both of who lead double lives as men named “Ernest” in an effort to court women seeking a man with this name. As other characters slowly realize their real identities, Jack and Algernon find themselves in a predicament that is ultimately resolved with an unsuspected twist.

Sophomore Ben Habbeger is performing the role of Jack. His most recent Concordia theatre role – the steward from last year’s “Into the Woods” – provides a stark contrast to Jack.

“In the past I’ve been more of a character actor,” Habbeger said. A character actor is an actor who predominantly plays unusual or eccentric characters. “(The role of Jack is) really challenging me to become a realistic character.”

Still, Habbeger takes away substantive meaning from the story.

“I suppose the biggest moral would probably be to be honest,” he said.

Junior Collette Hagen portrays Miss Prism, the guardian of Jack’s young, female ward. Like with Habegger, this role is much different than her most recent Concordia role as the witch in “Into the Woods,” but she is enjoying playing Miss Prism nonetheless.

“She’s definitely got an attitude,” Hagen said. “She tries to come off as a higher-class woman . . . (who) tries to seem educated because she uses these big words all the time.”

Like Habegger, she finds meaning in the play, although her take on it is a bit different than his.

“You could basically say that it’s a play about mistaken identity,” she said.

According to Christian Boy, assistant professor of theatre art and director of the show, Concordia’s showing of this play is long overdue.

“’The Importance of Being Earnest’ has been on the list of shows that Concordia College Theatre has wanted to do for quite a number of years,” he said. “So when we (sat) down as a department and (decided) shows and I suggested this, it resonated with the rest of the department.”

In a twist on this older piece, the play will employ a unique presentation style known as “the round” to make for a more unique setting between the cast and the audience. Instead of having a stage on one side of the theatre that the audience faces from the other side, the stage will be in the middle with the audience surrounding it and looking inward.

“In a proscenium theatre . . . you’re limited to a presentational performance where the actors are presenting this play,” he said. “In this play . . . each audience member has a different perspective on the physical stage picture.”

Hagen believes this setup makes for a unique experience for audience members.

“It makes it a really intimate and realistic setting for the viewer because they’re literally right there watching,” she said.

Since “Earnest” was written more than 100 years ago, the English used in the play is much different than English spoken today. To help the student actors grasp more of the content that could otherwise be lost from this period piece, Boy has had them conduct research.

“We’ve looked at a number of period pieces in terms of acting styles and just in terms of delivery of language,” he said. “Understanding how these sentences are formed helps them with their period research.”

Overall, those involved in the play seek to stay true to the original intent of the play by attempting to make the audience laugh in unconventional ways.

“I don’t think this is a play meant for obvious humor,” Hagen said. “You really have to listen for the jokes.”

“Oscar Wilde talks about this show in terms of it being a trivial comedy for serious people,” Boy explained. “This is a light play, but its focus is on language and wordplay . . . The syntax and vocabulary is very advanced, all of which serves Oscar Wilde’s purpose.”