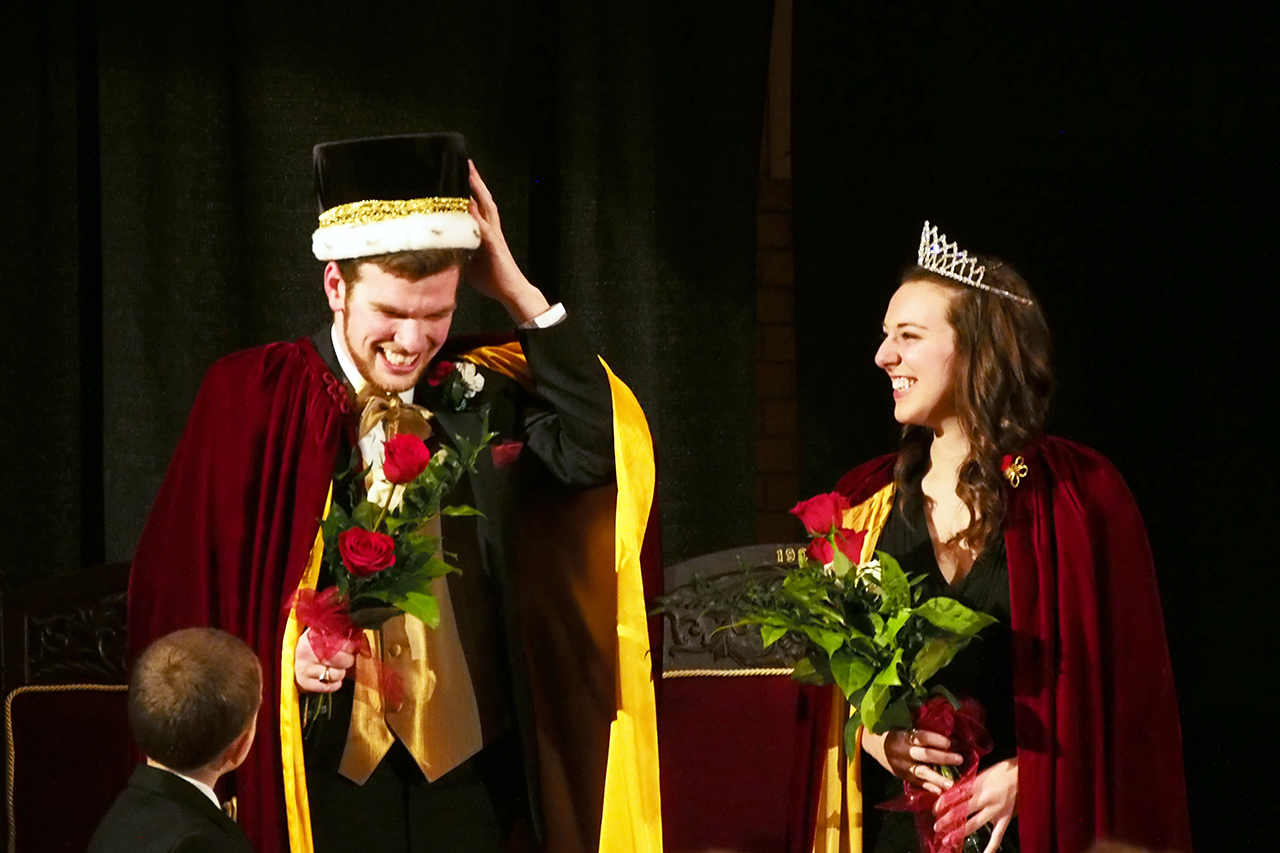 “I was really shocked, but in the best way possible,” Sullivan said.

He says he was humbled to have been chosen for this honor by a school he loves so much.

Sullivan is the co-president for the Straight and Gay Alliance, vice president for The Concordia Choir, elections and credentials committee commissioner for student government and an intern for Admissions on campus.

Grandner is president of The Concordia Choir, the Orientation Committee Chair and is the senior class representative of Student Government Association. In addition to all of their shared activities, Grandner and Sullivan are housemates.

Sullivan was the perfect choice for Homecoming King, according to Concordia junior Kelly Thurmes.

“I voted for Colin because he is a nearly flawless representation of what it means to be a Cobber,” she said. “He is friendly to everyone, even people he doesn’t know, and he made me feel welcome from the second I met him.”

“Carly represents the over-involved Cobber, and she’s always happy, even when she’s stressing about the million activities she’s in,” Nelson said.

The coronation ceremony included words of wisdom from Cobbers past and present. Homecoming Queen of 1983, Judy Siegle, encouraged Cobbers to cherish the time they have at Concordia, because the friendships formed will last a lifetime.

Last year’s royalty, Stephanie Barnhart and Joel Leeman sent video messages congratulating the homecoming court on being nominated and encouraging them to enjoy their last homecoming week as Cobbers.

Juniors Michael Chambers and Anna Saxon emceed for the night’s events,which were held in the Centrum for the first time, rather than in Memorial Auditorium. Chambers noted that the move to the Centrum was a good choice, as it made the event more intimate. The space holds around 400 people, and was nearly at capacity for Coronation.

Homecoming Chair Matthew Dymoke was pleased with the new site.

“It looks like it was meant to be there,” he said.

However, because of the Centrum’s frequent use, set up had to be done quickly and efficiently. Committee members and facilities staff set up the event in just about an hour. Most of Coronation’s approximately $6,000 budget is spent on setup costs.

This year’s homecoming theme is “We Are Concordia: A Living Tradition.”

Coronation kicked off a week of homecoming events including a bonfire and fireworks, a freshman talent show, a concert featuring The Concordia Choir, The Concordia Band and The Concordia Orchestra, and the football game versus Bethel College.

2013-10-09
Previous Post: Nichole’s Fine Pastry or: How I found happiness in cake form
Next Post: Visting author speaks on genocide