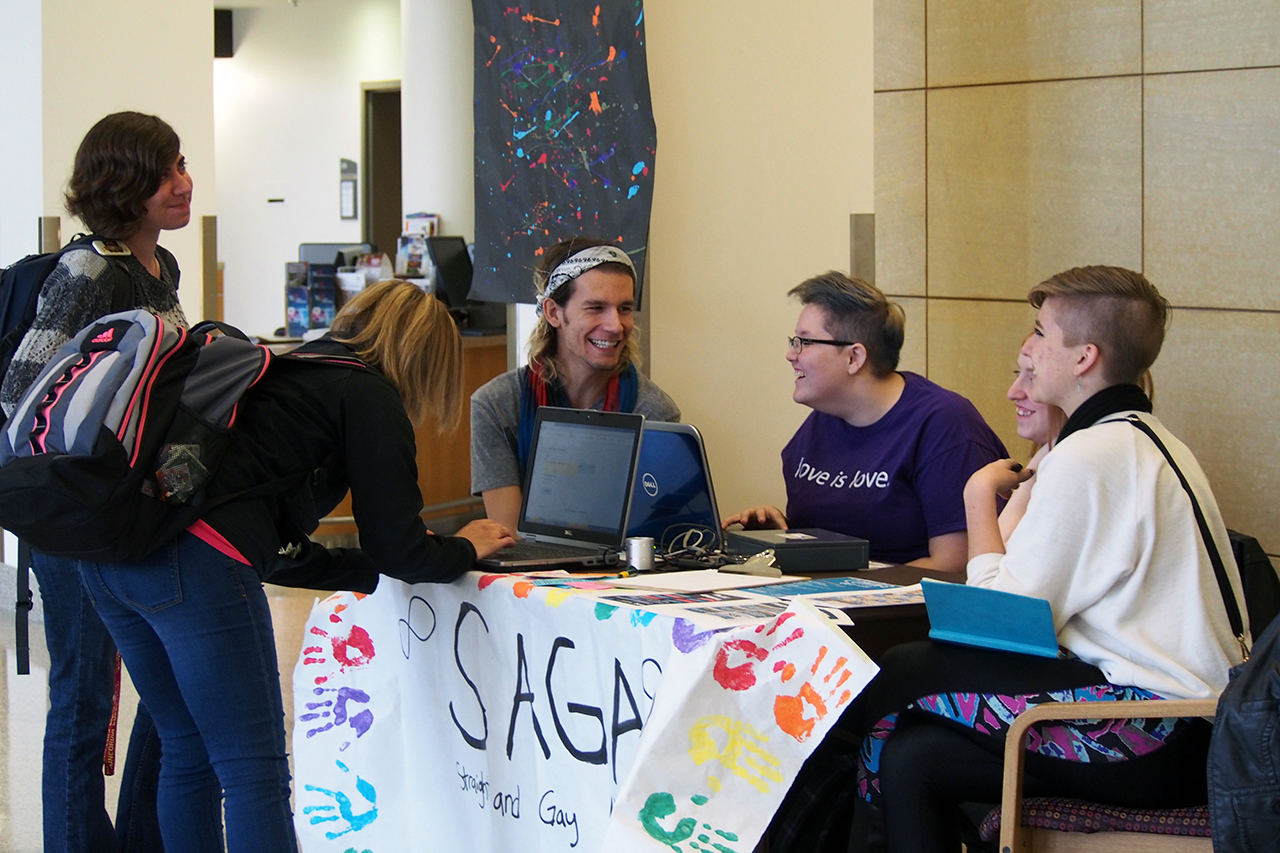 Coming Out Week reflected Concordia’s Straight and Gay Alliance’s plans to expand their outreach this year to members who are not gay, lesbian or bisexual last week.

In the coming year, SAGA will spread their message of awareness and being a safe space for all people by trying to get more speakers on campus and doing more with publicity.

SAGA celebrated this past week by tabling, taking part in Tuesday’s Take Back the Night, hosting a panel on Wednesday, watching a trans*-focused movie Thursday and by turning Friday into “Hug an Ally Day.”

As last year did not focus as much on people identifying as either “trans*” or “ally,” this year’s goal is to better recognize such people.

Allies are supportive, heterosexual individuals, and the term trans* includes the asterisk to show the term applies to a wide variety of individuals with differing experiences, while still being grounded in trans issues, according to Colin Sullivan, one of SAGA’s four co-presidents.

Colin Sullivan, one of SAGA’s four co-presidents, hoped for the week to be a kick-off for SAGA as they attempt to continue spreading a message of inclusivity on campus. Although the campus is accepting, SAGA hopes students will fully realize SAGA’s message and use it while BREWing.

“We would love to see more people attending meetings and coming to these events who aren’t allies,” Sullivan said. “This isn’t just a big rally for people who are already supportive.”

Co-president Geneva Nemzek believes that two people who disagree can still respect each other and provide what SAGA calls a “safe space.”

“Of course I’m going to be friends with people who aren’t supportive of the LGBT community,” Nemzek said.

According to Sullivan, SAGA hopes to reach out to more people this year, including those with conflicting viewpoints. Nemzek agrees that SAGA wants people who are not supportive or agreeable at this year’s SAGA events to create better conversation.

Sullivan believes the trans*-awareness day will be helpful because those people generally receive less attention. We do not have many trans*-students on campus, but we need to be aware of them in order to BREW because they are a part of the world, according to Sullivan.

Thursday’s movie, “Boys Don’t Cry,” was based on real events and aimed to be emotional as well as informational. SAGA chose this sort of movie intentionally.

“When people feel really uncomfortable, that’s when they start to grow,” Nemzek said.

To continue on the theme of a wider focus, SAGA’s Coming-Out Panel was more diverse than last year.

Ally Kathleen Perry was impressed by the panel. She said it showed people really opening up and becoming comfortable with themselves.

Recognizing the LGBTQ community is important to Nemzek and Sullivan, but so is expressing their gratitude to allies. They believe that Hug an Ally Day was a way to express their thanks.

“We wouldn’t be anywhere close to where we are today without our allies,” Nemzek said. “We’re not hanging out with our LGBTQ friends every day. … Let’s celebrate those people who are there for us even though they don’t have to be.”

This focus resonates with Perry.

“I am more consciously thinking about (being an ally),” Perry said, who enjoyed the positive energy in the week. “It’s nice to know that my support is appreciated.”

Multiple members of SAGA are grateful for the support they feel at Concordia.

“Without allies, there wouldn’t be this sort of acceptance,” Perry said.

Hug an Ally Day was a new concept to Perry, which she said took her off guard.

“It made me want to learn more,” Perry said.

Once it had been explained, she appreciated the idea.

“It gave me a sense of having a purpose,” Perry said.

Nemzek introduced the idea of a day of thanks to allies after hearing about Winona State doing something similar.

“I take that acceptance for granted,” Nemzek said. “We’re bringing awareness to the fact that allies are awesome!”

While SAGA’s week included a day of hugs last year, the hugs had a different focus this year. Rather than initiating the hugs, the allies received the hugs.

“It’s a personal thing to do,” Perry said. “It’s a different way to say thank you.”

Nemzek agreed that it was a good idea.

Still, a hug is only a hug.

“I can’t think of a way that I could truly express my appreciation,” Nemzek said. “It’s astronomical.”

SAGA members are also grateful to see people wearing their message around campus. To keep the message of “Love is Love” spreading, V-neck t-shirts and snapback hats were introduced this year. By the end of the week, SAGA estimated to have sold more than 300 shirts and hats.

Although last year sold more than 400 shirts, Nemzek believes the sales were very successful, as this year is more politically calm.

Even though the second week of October is the week nationally set aside for SAGA, Concordia’s chapter chose to celebrate it early due to homecoming festivities.

“We don’t want to compete,” said Jordan Seim, a member of SAGA.

Sullivan and Nemzek agree that SAGA gets a remarkable amount of support on campus.

“People making fun of us is not the norm at all,” Nemzek said. “When people say things to me, I say ‘well, that was bizarre.’ It affects me, but it’s not something that happens every day.”