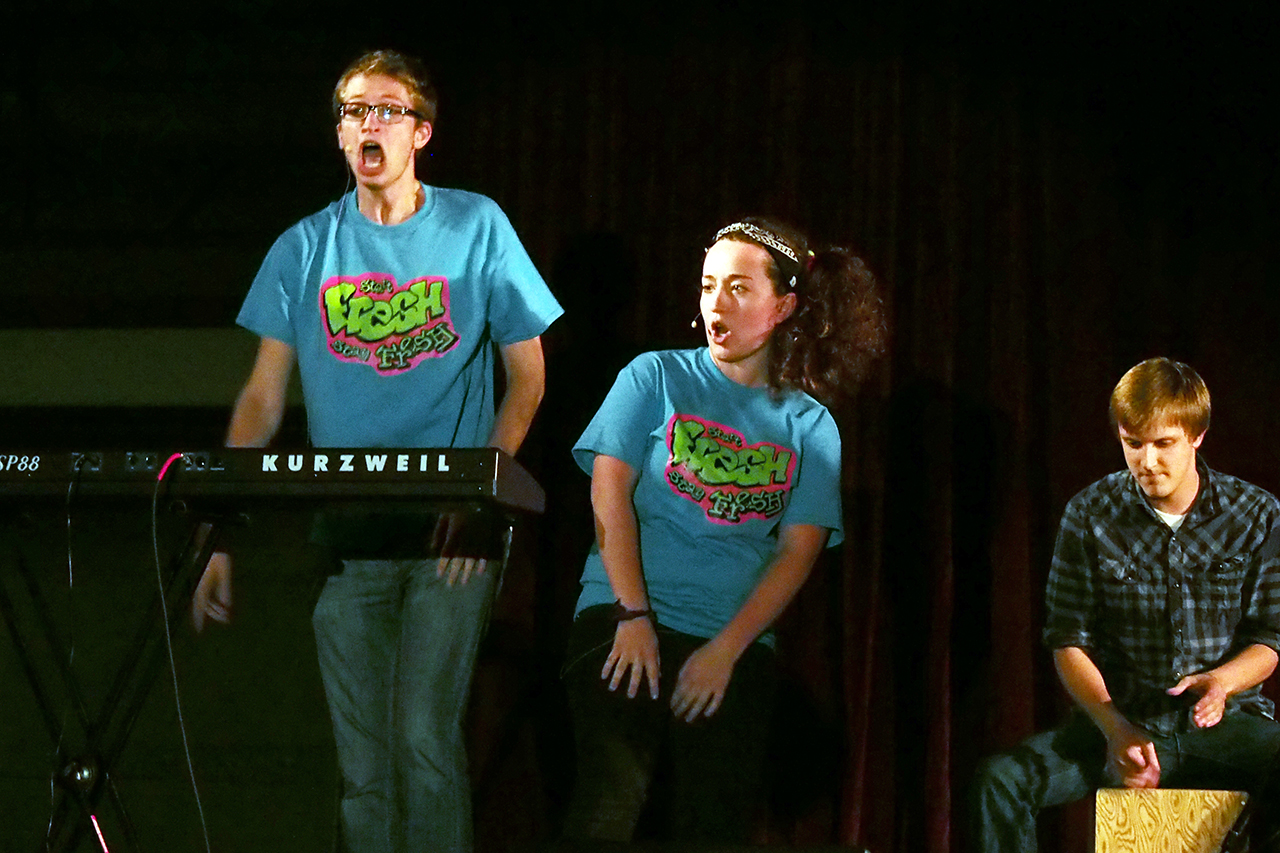 This year’s Frosh Frolics drew over 400 students who were eager to get to know the new freshmen class.  The talent show celebrates the incoming freshmen class and allows them to show their diverse talents to the school for the first time.

Students from every class filled Olson Forum on Thursday night, waiting to see what talents the class of 2017 has to offer the campus.  Eager Cobbers packed into all the available chairs and found space on the floor when the seating was full.  Students also had the ability to stream the event online.

Mary Rappa, Co-Committee Coordinator for Frosh Frolics, stressed the importance of focusing on the freshmen and their unique talents.

The acts varied from solos to groups performances, featuring about 35 students total.  The acts included clogging – or tap dancing – to Atmoshere, singing, line dancing, and a barbershop quartet performance of “Coney Island Baby.”

Auditions were held in late September and of the 23 acts that auditioned, 13 were chosen.

The committee intentionally tried to pick a variety of acts and placed them strategically through the program.

“We wanted to show that you still have talent even if you don’t sing,” Rappa said.  “People think ‘oh, I can’t sing so I don’t have talent’ and that’s not fair.”

Andrew Carlson and Bethany Tompkins, who Co-Committee Coordinators along with Rappa, hosted the show.  The show opened with a “Fresh Prince of Bel-Air” parody dedicated to the Concordia community.

For the first time, between acts the hosts focused on audience interaction instead of doing skits and dialogue like past shows.  Freshmen were chosen from the audience to complete “Minute to Win It” games, “How do you feel” segments, and a pie eating contest.

Sticking to the theme of focusing on who the freshmen are, the hosts revealed short biographies about the performers.  The committee expressed their emphasis on having the campus get to know the freshmen beyond the usual “where are you from?” and “what’s your major?”

Marie Vanderpan, a senior, enjoyed the new method of introducing the performers.

“It wasn’t a story, it was funny acts,” Vanderpan said.  “They [the emcees] weren’t putting on a show, they were themselves.  They were engaging and drew all the acts together really well.”

The biographies revealed who had advice for Miley Cyrus, who had been abducted by aliens (or who were actually aliens), and some most embarrassing moments.

“It’s a cool way for freshmen to get to know each other,” Vanderpan said.

Niki Wagner, a senior, noticed a pattern between those who are involved in Frosh Frolics and the level of performance on campus.

“The freshmen who perform at Frosh Frolics are always performing for the rest of their time here,” she said.

Wagner remembered the people who performed her freshman year and said those are the ones who still love performing at events like Acoustic Buzz and Cabaret now.