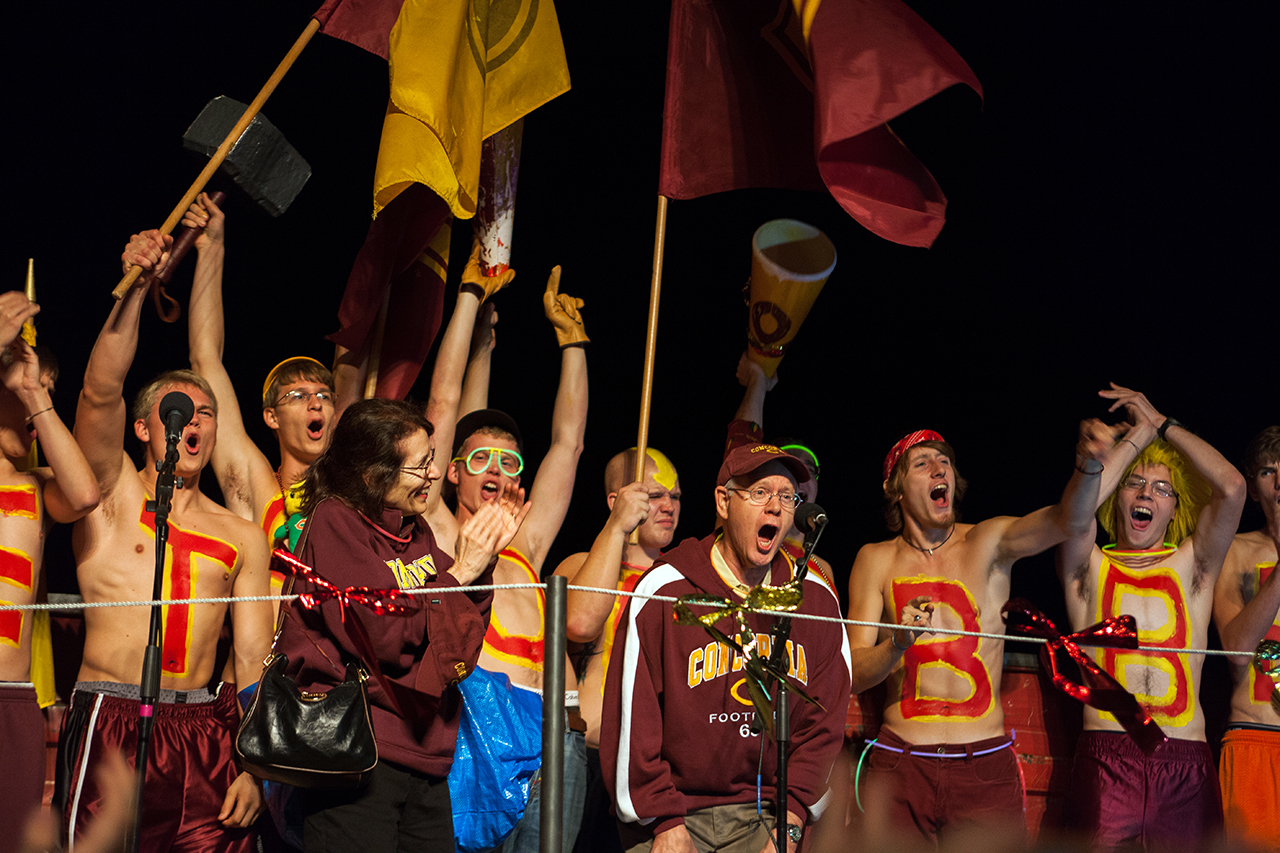 About fifty homecoming committee members gathered Wednesday night to receive their assignments. They armed themselves with maroon and gold streamers, fondly referred to as “gleam and stream”, rolls of packing tape and a driving enthusiasm. Dressed in black polos with the Cobber ‘C’ proudly displayed, they were ready to spread across campus and kickstart the festivities with some colorful school spirit.

You may have seen Chocolate Man sporting a nice gold bowtie this week thanks to these decorators. The Chocolate Man gets a stylish makeover each year for the festivities, according to Matt Dymoke, this year’s Homecoming Chair. This is only a small part of the overall decoration project, however. Homecoming committee members dedicate themselves every year to decorating all major areas of campus.

This production needs a lot of support. It needs dedicated people, a good amount time and a budget ready for the wave of maroon and gold.

The total homecoming budget is around $100,000, according to Dymoke, and around $5,000 goes toward decorations. The money was spent on, among other things, 48 rolls of tape, 80 rolls of gold streamers, 80 rolls of maroon streamers and over 600 balloons.

The festive decorations are this year’s Homecoming Queen, Carly Grandner’s favorite part about the week.

“Seeing the campus plastered in Cobber decor gives our already beautiful campus so much spirit,” she said. “It creates such a proud, exciting and sentimental atmosphere that’s so rich with tradition, that makes me stop and think, ‘Wow, this place is really incredible.’”

With more than 80 light poles to wrap with streamers, every committee member spent one to two hours wrapping, taping and perfecting, according to Dymoke.

The decorators were happy to be more hands-on in this way, according to committee member Kelsey Rausch.

“I decided to apply for Homecoming because I love Concordia and I didn’t want to just watch everything happen on campus.  I wanted to actually make it happen,” Rausch said.

Senior Kayla Casavant is participating in her third year on homecoming committee.

“We’re one of the only schools that do an eight-day homecoming, and it’s fun to be a part of it,” she said.

The homecoming festivities kicked off Monday and continued through Sunday afternoon.

Class of 2012 graduate Elijah Johnson had a bit of a different perspective on this year’s festivities.

“The campus doesn’t need the decorations because it is already beautiful enough to begin with,” he said, “but they were a cute touch.”

Now that Homecoming is officially over, if you look in any of the trash cans around campus, you’ll find discarded streamers, popped balloons and remnants of ribbons. These decorations have served their purpose, but they will be out again in full force for next year’s homecoming week.