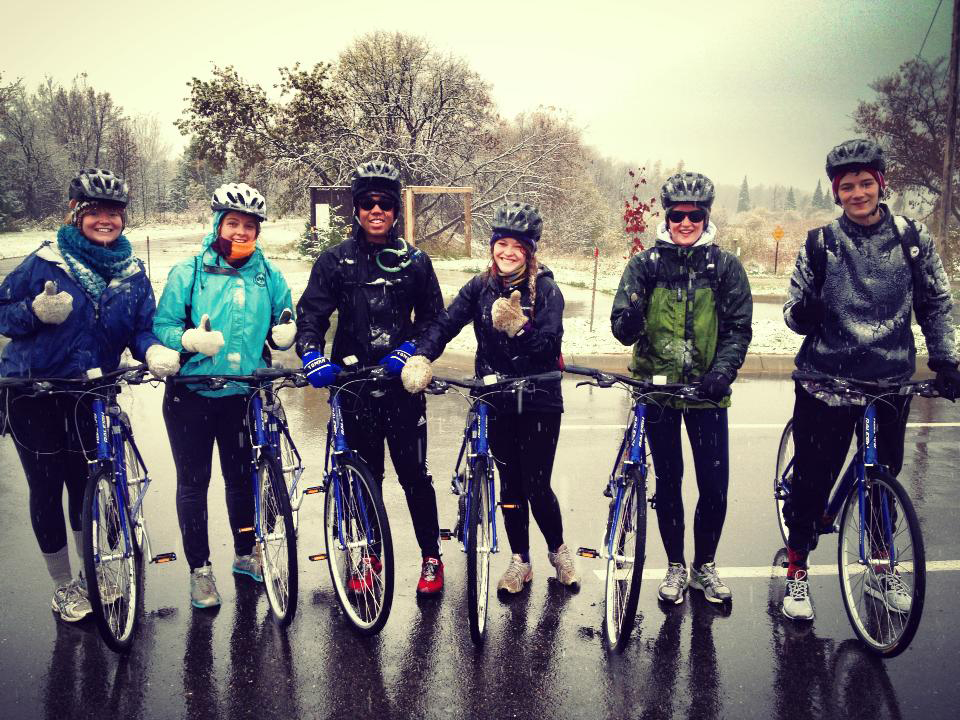 Over mid-semester break, Concordia students Kristina Kaupa and Denise Sykora led a small group of students along with faculty advisor Dr. John Clark on a bike ride to Bemidji.

The bike ride, called the “Lumberjack Ride,” focused on local and organic food movements, as well as community movements surrounding sustainability. There have been past spring break sustainability trips, but Kaupa and Sykora wanted to take advantage of this opportunity to start a fall trip.

On Oct. 18, the Friday of mid-semester break, the group drove from Moorhead to Callaway, Minn., where the bike ride began. They biked from Callaway to Park Rapids Friday, Park Rapids to Walker Saturday and Walker to Bemidji Sunday. Altogether the students biked around 120 miles, though they had to drive part of the way in the college-provided vehicle due to rain and snow. Kaupa said the most the group biked in one day was a little more than 40 miles, and the route was mainly on trails.

“Everyone was able to manage the distances,” Kaupa said.

The bikes used on the trip were purchased by the college through the student government’s Special Projects and Initiatives Fund. The SPIF is a source of funding for college programs, projects and activities. The fund aims to support opportunities for unique educational experiences.

The group spent Sunday in Bemidji visiting four places to learn more about the exceptional sustainability going on there.

“It’s incredible how much is going on in Bemidji in regards to sustainability,” Kaupa said.

First they met with the sustainability office at Bemidji State University, where they talked with many students and staff about sustainability with recycling, clothing and food. Kaupa said BSU’s programs are very similar to some at Concordia, but BSU is just a step ahead. Kaupa thought it was great to observe their program, to see how to continuing moving forward to a more effective program.

The group then met with Rail River Folks, an organization that offers classes and provides space for farmers markets.

“They approach sustainability from a cultural and community aspect, maintaining knowledge of how different cultures do things, as well as how they pass those things on from generation to generation,” Kaupa said.

Next, the group visited with Paul Conklin, an organic farmer outside of Bemidji. His farm contained numerous commodities, including bees, cattle, chickens and vegetables. Both Kaupa and Sykora were impressed seeing the many ways an organic garden is run.

Finally the group visited Harmony Co-op, which gave them an idea of how a community can come together and get local and organic food to people.

One of the highlights of the trip was at a co-op in Walker, where the group was able to make their own organic and seasonal soups. The co-op taught a class on making various foods, including sweet potato coconut curry and broccoli cream of cashew.

“Everyone on the trip was able to see how sustainability can fit into their lives,” Sykora said.

Kaupa and Sykora hope to implement some of the projects from Bemidji on campus, and they also hope to continue the trip next year as well.