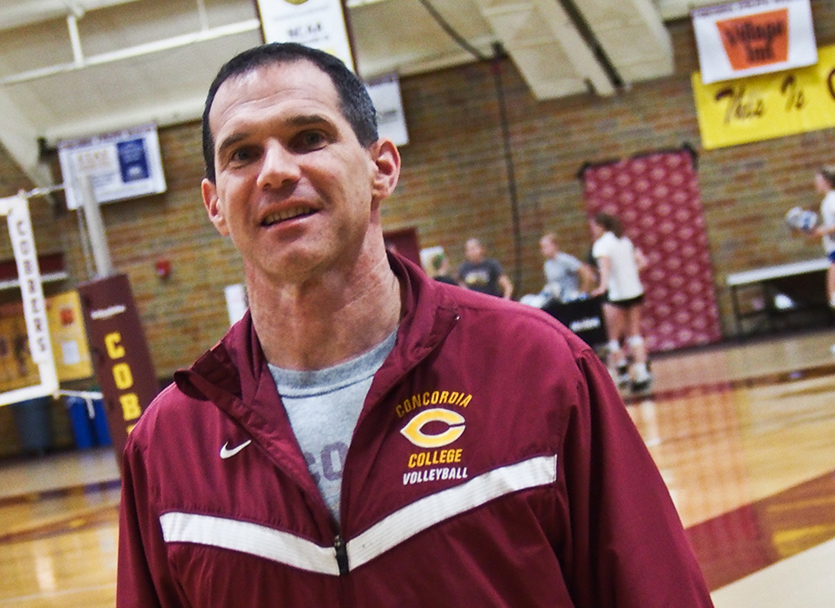 Mosser wan’t aware he was about to reach milestone win

After losing two matches the previous night, Mosser was pleased the team played not only better, but well enough to get a win over Carthage. After the game, a parent of one of the players presented Mosser with a card.

“I didn’t know it was coming,” Mosser said.

He had not realized his 400th win had been so close.

Going into the game against St. Thomas, the coaches and players had already been preparing to oppose them. St. Thomas was ranked third in the National Collegiate Athletic Association for division III at the time.

“We went into the St. Thomas game knowing they are a great team,” said team captain Kayla Hampton.

Hours of film viewing, scouting and learning a variety of strategies were part of how the team prepared for this difficult game.

“(It) was a match no one was expecting us to win, but we knew we could,” Mosser said.

The Cobbers finished ahead with a tight 3-2 victory over St. Thomas, winning the first two matches and then the fifth match 15-13. This win gave them a conference record of 6-0.

Mosser’s 401st win was more memorable to him for many reasons.

One was beating St. Thomas, because while they have always been a big rival, they are also a team Concordia volleyball respects.

The game was also a conference match, which means the team placed high importance on it.

“All of these things together made it a very satisfying win,” Mosser said.“The best moment was when it was all over. I can even kind of see it in slow motion,” he said. “We set our right side; she hit the ball and went off the block. I could see it was going out of bounds … we did it.”

While the win over St. Thomas was a benchmark win for Mosser, it was also a big win for the team.

“That was a very special win … to go down there on their court and to beat them in five,” said assistant volleyball coach Bob Jones. “We don’t live and die by wins and losses, but that one just felt good.”

Other team members agree with this attitude toward winning.

“Winning is a byproduct of effort,” Mosser said.

Mosser focuses on having everyone on the team be at her best.

“If we just prepare ourselves to be at our best, the wins will come,” he said.

Mosser thanks his players for the wins.

“We have had so many great student athletes come through Concordia. They are the ones who make it possible,” Mosser said.

“Tim Mosser is a great coach, and he knows his skills very well; and he has definitely worked for all of those wins,” Hampton said.

Jones pointed out that he and Mosser get along well, which contributes to the teams’ success.

“One of the things I respect about Tim (Mosser) is that he listens to me,” Jones said. “We have a really good working relationship.”

Mosser and his team have had a successful season so far. The Cobbers have one more conference game this season.

Although Mosser hit a benchmark 400 wins, he is determined to take things one game at a time.