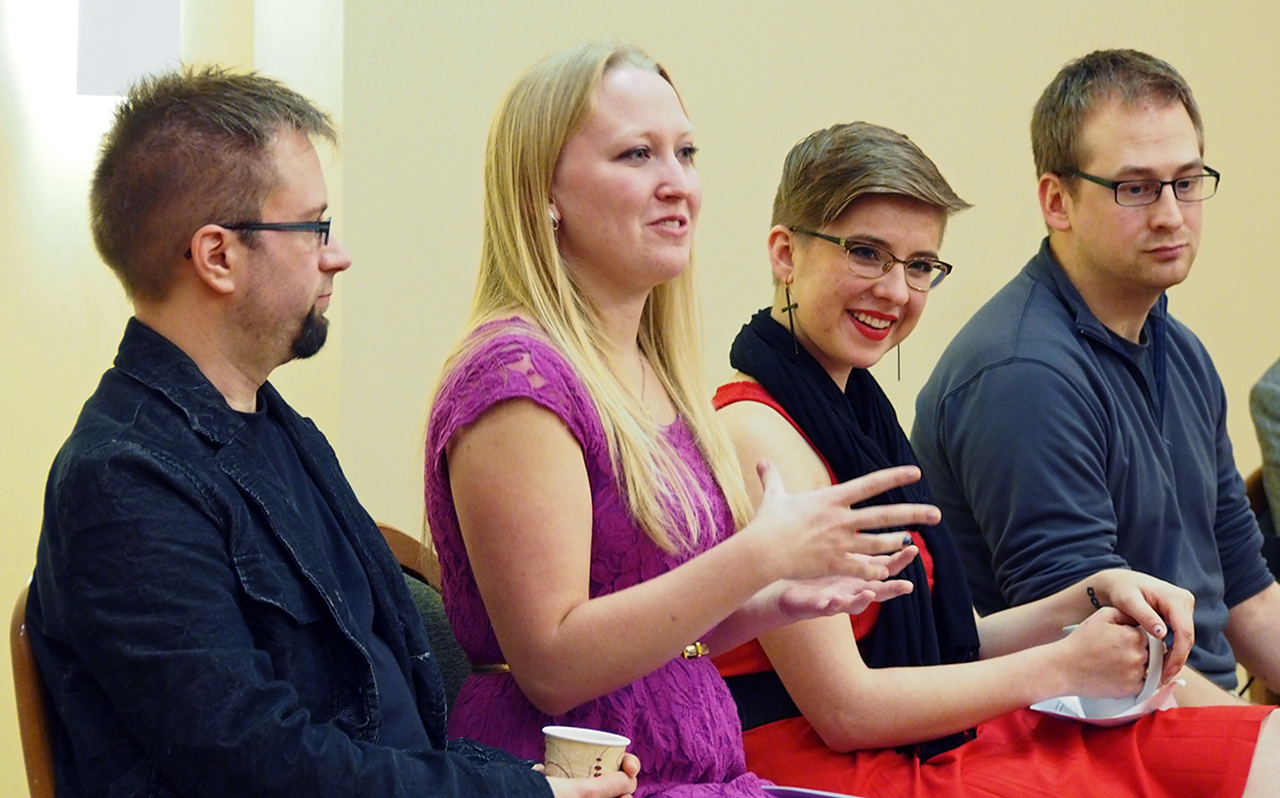 The “Ask an Atheist” panel gave area residents a chance to discuss the reasoning behind choosing to follow no religion. Concordia’s Secular Club held the panel on campus last Sunday in an effort to increase dialogue and decrease negative connotations surrounding the topic.

The Secular Club held the panel as one of their first larger events. Student panelists included Robyn Adams from Concordia’s Better Together and Brittany Widseth from Concordia’s Secular Student Community. Adams and Widseth were joined on the panel by community members Jeff Eide and Trevor Nelson from the Fargo-Moorhead Secular Community and the Great Plains Atheists.

The Secular Club hoped the event would make attendees feel welcome, regardless of their perspective, for the sake of better conversation.

“Religious minorities don’t feel welcome on campus,” said Taylor Tielke, the Secular Club president. “We want to be perceived as a tolerant group where anyone and everyone can voice their decisions.”

He said the group is an umbrella club of non-Christian and non-religious students at Concordia. It is a place for them to find community, Tielke said.

Sunday’s panel focused on atheists as a way to start the conversation on campus, he said.

Panelists attempted to explain not only what they identified themselves as but also the reasoning behind their beliefs.

“There’s a ladder of disbelief,” Eide said. “I am agnostic because I don’t know (why the world is the way it is) … I am atheist because based on the available evidence, I don’t believe there’s a god.”

All four panelists grew up with religion and, for differing reasons, all changed their minds to become atheist.

“Once I reached the age of reason, I didn’t fall into it,” said Eide, referring to the Catholic faith he was raised in. He said he started desiring to know more but was not getting definite answers. “I think skepticism should be applied to everything without exception.”

Panelist Robyn Adams, a sophomore at Concordia, grew up being what she described as a “good little Catholic girl.” Yet as she grew older, her thoughts changed.

“It stopped making sense to me,” she said. To understand herself, she looked to the other things she knew. “I look to my friends, to the goodness of humanity (and) I look to nature.”

Adams has many Christian friends with whom she has talked about her beliefs.

“I’ve learned more about myself through my Lutheran friends than I could’ve learned on my own,” she said. She believes the discussions have not only made her more confident in her decision to be atheist but have also made her friends stronger Christians, because they had to analyze their beliefs.

“It (the conversation) is mutually beneficial,” Widseth said.

Widseth, a Concordia senior, likewise decided to not identify religiously after growing up in a Lutheran church. As a writing major, she searches for themes in literature she can relate to.

“I use that to figure out who I am, what I value,” Widseth said.

The fourth panelist, Trevor Nelson, identifies as a “recovering fundamentalist.” Because of a friend, he read a book on atheism and has read many similar books since that have caused him to conclude that there is no god and that the belief in any god is harmful.

“There’s a cost for every belief system,” Nelson said. “There are things with religion that you have to do. It does more harm to the world than good.” He said that examples of things people do for religion may include giving away money, spending time worshipping or protesting.

While she did not fully agree, Adams could relate.

“Religion can be used to great good or to suppress people,” Adams said.

Adams and Widseth agreed that concern for their decision by Christians comes out of compassion and caring.

“They don’t want to see bad things happen to us after death,” Widseth said.

The panelists agreed that while they do not want to die, they are not necessarily afraid of it.

“(Death) is an inevitable truth,” Widseth said. “It relaxes me, oddly enough.”

The other panelists agreed that while it sounds nice to have something better after death, it either did not make sense or did not seem worth it to them.

“I find the greatest benefit religion offers is comfort,” Eide said, “and I don’t find comfort as necessary as knowledge.”

Knowledge, in fact, drew the panelists together into their excitement for the conversation.

“I think discussions are important because we want to know each other on a more personal level,” Adams said.

The panelists all agreed that discussions are important not only for understanding, but also for relating to other humans. They believe that having that human connection can cause a person to see past negative labels.

“I would be very depressed if religion were to disappear,” Eide said, “… it is the greatest conversation.”