By: Quinn Kragenbring
In: College, Fall, Sports
Tagged: MIAC hitter of the week, volleyball
With: 0 Comments 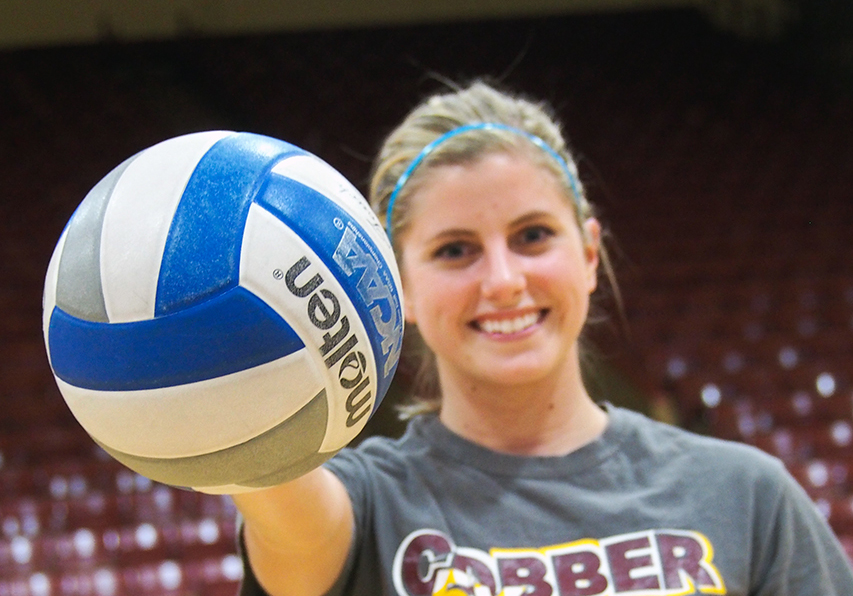 Kayla Hampton was named Minnesota Intercollegiate Athletic Conference hitter of the week Oct. 15 with 15 kills in Concordia’s volleyball game against St. Thomas, putting her season total at 216. Hampton’s coaches and teammates find her very deserving of this honor for not only her stats but also her attitude and dedication.

Hampton is the 5-foot-10 starting middle hitter for the Cobbers from Benson, Minn. She is a senior and one of the team’s captains.

She was honored to be named MIAC hitter of the week. She thanks her teammates and coaches for the honor.

“It is such a team award, even though it’s only presented to an individual player. If we (as a team) didn’t beat St. Thomas, I wouldn’t have gotten the award. So I owe it to the rest of the players for the award,” Hampton said.

Her coaches agree that she is a dedicated player as well as a humble person.

“She’s just a great person. She’s selfless, she’s always there for the team, she puts the team first before her,” Jones said.

Her teammates recognize her as a hardworking player.

“When she’s out there, no matter what, she’s going to go 100 percent,” said teammate and co-captain Angie Waller.

Hampton works hard both in season and out. During the summer for two hours a day, four days a week, she works with a trainer on campus.

“When you’re doing it, it doesn’t seem like work because volleyball is so fun; we enjoy working on it,” Hampton said.

“She’s probably one of our hardest workers on the team. She works out hard out of season just as much as she does in season,” Jones said.

Hampton has had quite the journey to the position she has on the team now.

She started as a right-side hitter her freshman year at Concordia. She did not see the court much during her sophomore year. She stuck it out and has been the starting middle hitter for the past two seasons. Hampton said this journey took a lot of hard work and mental focus.

Another aspect of Hampton’s game that makes her stick out is her leadership role.

“Even when I’m struggling, I look to her. I always know she’s going to say something positive,” Waller said.

“She’s kind of been that person who’s always encouraging me and has been my role model,” said middle hitter Kelly Reed.

Hampton’s calm, collected and positive personality is an asset to her team.

“She’s really a stabilizing force for us … She’s a great leader on the court. She’s competitive but also calm,” Mosser said.

Hampton’s teammates have similar feelings toward her attitude on and off the court.

“She’s a really fun person to play with because she’s always positive and energetic. You enjoy being on the court with her,” Reed said.

Hampton enjoys playing volleyball for the Cobbers because she is able to be both an athlete and a dedicated student.

“Concordia is such a great school to be a student athlete at. There are so many people who are so understanding and want you to succeed, so it makes it really easy to do,” Hampton said.

Mosser is very pleased to have Kayla on the Concordia team.

“Kayla really embodies the kind of student athlete we want here at Concordia. She’s dedicated to the classroom. She is someone who works hard in season but also in the off season. She is very self motivated,” Mosser said.

Although her journey was not always smooth, Kayla has become an award-winning player.

Being named MIAC hitter of the week is not the only honor she has received this season. She was awarded all-tournament of two of the team’s tournaments.

Mosser predicts her to be an all-conference player and a good candidate for all-region.