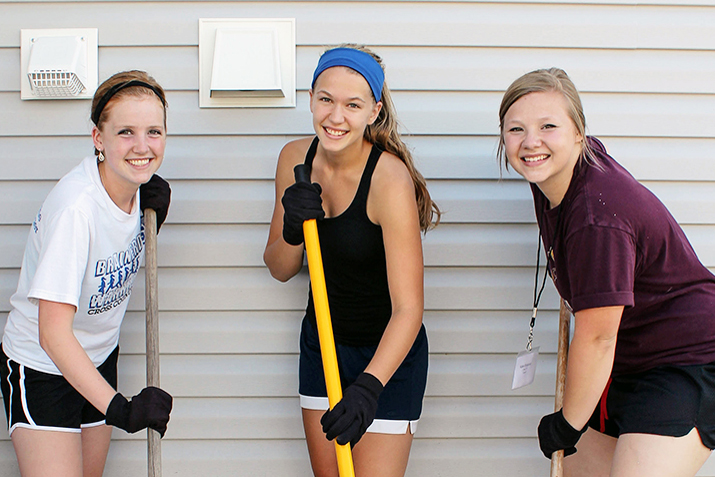 The recently chosen orientation chair for 2014, junior Katie Englund, will be selecting the members of next year’s Orientation Committee in the coming weeks.

Englund, a native of Lakeville, Minn., said she chose to come to Concordia for the “type of people” who attend.

“The community sense kind of hooked me,” Englund said.

Englund was chosen for the position through an application process that included an interview with the Student Government Association’s Elections and Credentials Council and a meeting with Lois Cogdill, Concordia’s director of orientation.

Though the decision ultimately belongs to the ECC, Cogdill meets with all final candidates for the chair position so she can advise the council on its choice.

Cogdill said it is important for the orientation chair to be “someone who can see and understand the big picture … but also someone who’s attentive to detail.”

The lead commissioner of the ECC, Colin Sullivan, echoed Cogdill on the position’s requirement of versatility.

“(The person hired) needs to have a grasp of what it takes to facilitate leadership on a group level as well as on an individual level,” Sullivan said.

Cogdill said orientation is exceedingly important to getting new students started in a positive way at college.

“We know that the first few days, and even the first few hours, can make a big difference in beginning that successful transition into college,” Cogdill said. “So it’s a critical program.”

Sullivan sees Englund as embodying the values and skills necessary in the orientation chair position. He placed special emphasis on the importance of enthusiasm to the orientation program’s success.

“First and foremost,” Sullivan said, “something we identified within Katie was an incredible passion for the orientation program.”

Cogdill feels that one of the distinctive features of Concordia’s approach to orientation is its heavy reliance on students to do so much of the work. Although she is ultimately responsible for the program, her role is largely to coordinate the efforts of the many on-campus groups involved in the program.

“Not only are we working on a program for the incoming freshmen and transfer students,” Cogdill said, “but we are also providing a leadership opportunity for current students.”

As chair, Englund will be in charge of planning summer and fall orientation in 2014, for which she said creating the Orientation Team is her biggest responsibility.

Englund said applying to be orientation chair was a somewhat sudden decision on her part.

“I’m not going to be in my CEC position next year because I’m graduating early,” Englund said. “So I was like, ‘I kind of want another leadership position for my senior year.’”

Englund added that applying for the chair position seemed logical because she loved her own experience as an orientation leader.

Within the next two weeks, Englund will choose six people to serve on the Orientation Committee.

The Orientation Committee’s responsibilities include choosing the more than 100 orientation leaders the college hires annually and planning the Orientation Week Welcome Show. Members of the committee must also take care of additional duties, depending on their positions within the committee, such as coordinating and publicizing Cabaret or assisting Intercultural Affairs staff with the orientation of international students.

Although the Orientation Committee application has only been up for a few days, Englund said she has already received a lot of applicants.

“It’s going to be a hard decision,” Englund said.

The qualities Englund said she is looking for from applicants include organization skills, time management skills and “people that are gonna mesh well and work as a team.”

The committee application is currently available on Concordia’s website. Applicants will be informed of the results Nov. 15.