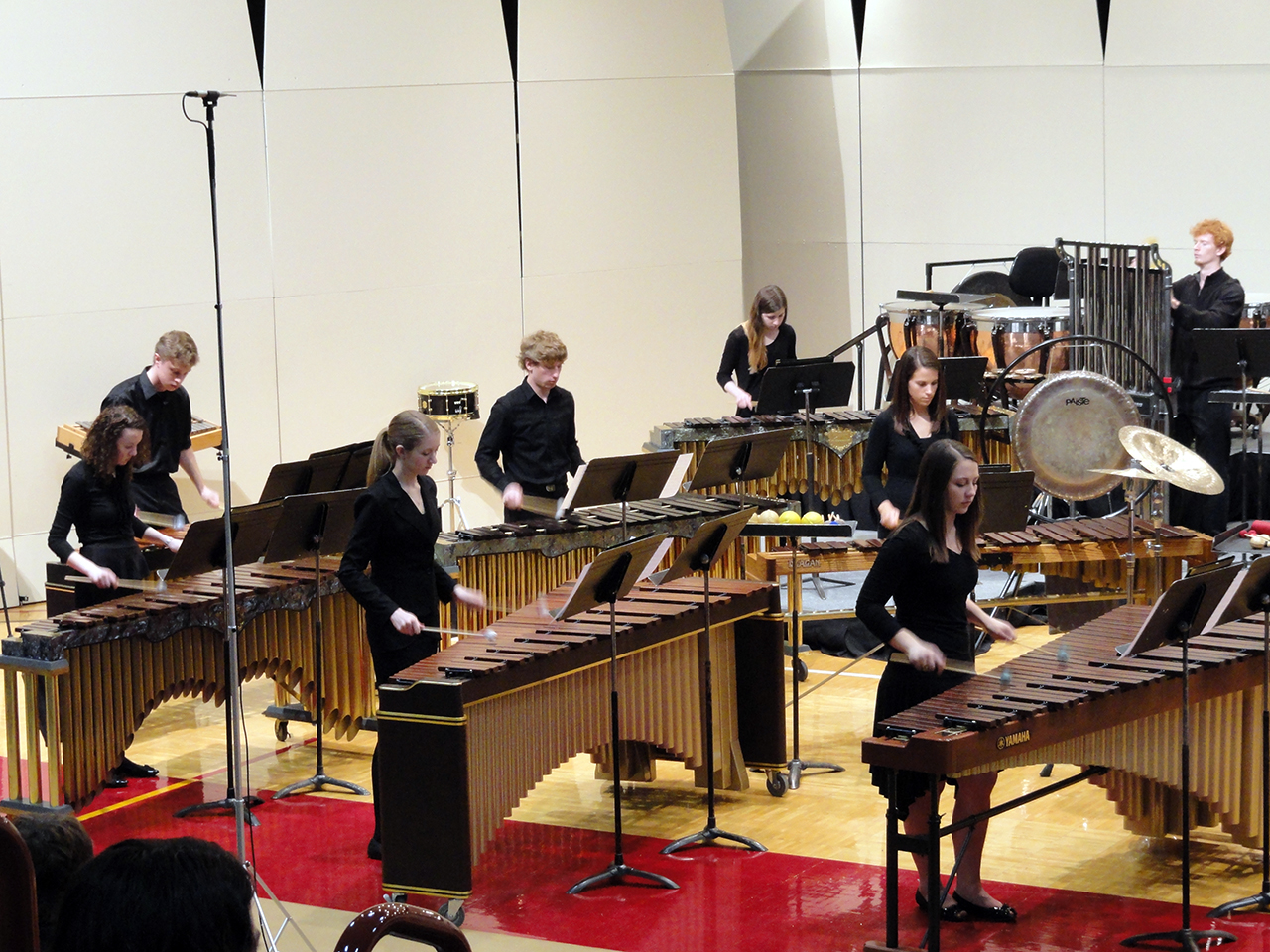 The Concordia Percussion Ensemble will perform at an international drum and percussion convention next week.

The ensemble is invited to perform a 90-minute concert at 4 p.m. Thursday, Nov. 14 at the Percussive Arts Society International Convention in Indianapolis, Indiana.

The percussion ensemble members are both nervous and excited.

“This trip is way bigger than any of us can imagine,” said junior Joey Bjornson, a percussion ensemble member.

Dr. David Eyler, the director of the ensemble, said it is a huge step to be playing at the world’s premier drum and percussion expo.

“It’s our biggest event in Concordia percussion history and one of the largest of the department,” Eyler said. “There’re very few groups (on campus) who have played at an international convention of this caliber.”

The society is the world’s largest percussion organization. More than 6,000 members representing over 25 countries show up to the conference annually. Performers of all levels, ranging from high scholars to the world’s best percussionists, gather to a percussion oasis of more than 100 concerts, clinics, master classes etc., according to the society’s website.

Eyler believes this experience is extremely valuable to percussionists. Not only will students get to see and experience the top percussion performers in the world, but students will be able to approach these performers individually to talk with them and ask questions.

Bjornson realizes this is a unique opportunity.

“It’s a different way to experience percussion,” he said. “It’s something you kind of need to see firsthand.”

Students may even get to play with highly skilled performers, as impromptu jam sessions regularly take place in the evenings.

At the convention, experts will be examining their techniques, directors will be critiquing their music with the hope of finding new repertoire, according to Bjornson.

The ensemble from Concordia will be playing music that has been composed within the last five years.

Though the music is very new, some of it, such as the piece “Prelude to Paradise,” is already known, said junior David Adamson, a member of the ensemble. He said that the people who are listening are also the most likely to notice mistakes, being percussionists themselves.

According to junior Madeleine Howey, another ensemble member, it is important that even the set-up, take-down and general transitions at the convention are done efficiently.

Bjornson said the performance is a way to represent Concordia and to Become Responsibly Engaged in the World with the percussion community, including prospective students. He said it is valuable for the community to hear the ensemble and that some students are recruited to Concordia because of the percussion ensemble.

Concordia will be a unique group performing at the convention, as most of the ensembles that play consist of students getting masters or doctorates in percussion performance, according to Eyler. In Concordia’s 24-member ensemble, however, fewer than 50 percent are music majors.

Adamson said this is a once in a lifetime event for almost all of the members. None of them expected to hear the news since they had not sent in an audition tape yet, though they have in the past.

“I was just shocked,” Adamson said.

Ryan Schlotterback, a senior at Concordia and current member of the percussion ensemble, realizes that this is a very special opportunity.

“The Concordia Percussion Ensemble is unique compared to many groups that perform at the convention because we belong to a liberal arts institution,” Schlotterback said via email. “We come from contrasting musical and academic backgrounds, yet we still work together to form an outstanding production.”

Other members are excited as well. According to sophomore Taylor Klimek, the tour will be a great bonding experience for the members, and that bond will benefit the music.

“I think our students are doing a great job and they’ll hold their own,” he said.

The ensemble will perform the music they plan to play at the convention again at their Concordia winter concert, which is at 7:30 p.m. on Dec. 9 in Hvidsten’s Buxton Hall.