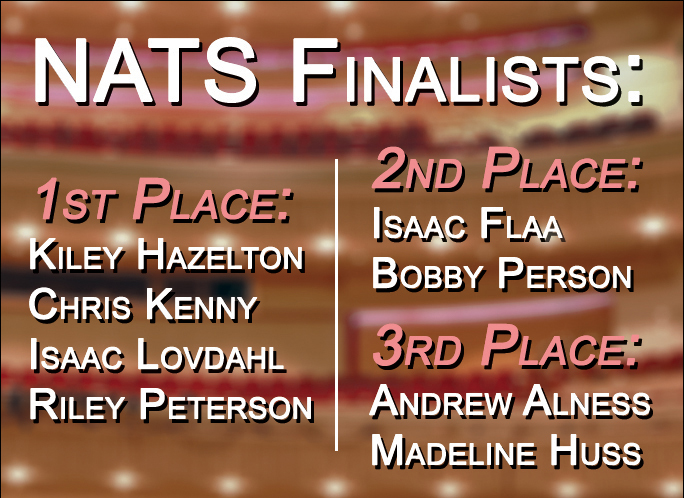 There was to be no clapping after his performance. The competition rules allowed the audience to only clap after every third performer. As the second contestant, he was supposed to enter and exit the stage without any audible acknowledgment from the audience.

So senior Chris Kenney did what he was supposed to.

However, after the performance, the audience could not help but applaud. Even the judges ignored the rule of silence to thank him for his performance.

“That kinda caught me off guard,” Kenny said. “I didn’t know what to do.”

So he did what he otherwise would have done. He left the stage without a bow and joined the other finalists in his section.

Kenny and 33 other Cobbers attended an annual singing competition Nov. 1 and 2. The competition, hosted by the National Association of Teachers of Singing, is a public competition in which colleges across Minnesota are free to participate.

Of the Concordia singers who performed at St. John’s University, 18 were semifinalists and eight placed. Kenny was one of four to win a first place prize. According to Peter Halverson, a Concordia voice professor, the college had a strong showing, which was not atypical.

“We’ve had some really strong singers these last couple years,” Halverson said. “We’re one of the stronger schools.”

Concordia typically does well in the competition and attends yearly, as the singers gain unique experiences each year and also get the chance to grow through being critiqued.

“It’s an opportunity to garner a little bit different criticism,” said sophomore Riley Peterson, who also won a first place prize. “It certainly is different than singing in a practice room.”

Kenny agreed with Peterson that Concordia’s voice instructors are helpful, but the critique of another knowledgeable person, like competition judges, is good for fresh pointers or new interpretations.

The competition was also beneficial to sophomore Kiley Hazelton, though she had never sung in a solo classical competition before.

“I’d always planned on doing (classical singing competitions in high school),” said Hazelton. “It was a lot more than I expected it to be.”

Hazelton entered the competition without any expectations except for herself to perform her best.

She and other Concordia singers said they would do this by trying to portray their character through their song without fully acting out the character. In addition, singers would pay attention to elements in the music such as technique or bringing artistry to the song, according to Halverson.

Halverson said he wants students to treat competitions like NATS as performances rather than competitions. In order to achieve this goal, Hazelton reminded herself that the judges’ scores were out of her control. She succeeded in winning first place, though that was not her goal.

“I was just there to make art,” she said. “Being able to perform fuels my fire and passion for singing.”

Junior Isaac Lovdahl, another first place winner, said he also was not there as much for the competition as for the experience. As a vocal music education major, he wanted to become more knowledgeable on how to work with the voice. He said he attempts to translate the experience into something he can use to teach others.

“Try to put yourself in (the character’s) situation,” Lovdahl said. “I try to be the person who the piece was written for.”

Kenny similarly tried to manipulate his mood for the situation.

“I had made a decision to relax and have fun with it,” he said. “My performance reflected my mood at the time.”

The overall mood of Concordia at the competition was very supportive, according to Halverson.

Students supported each other by listening to each other’s performances and cheering each other on.

Hazelton said she was overall very impressed with Concordia’s performances at the competition.

“Concordia made an awesome showing,” she said.