Prism concert given a theme for first time 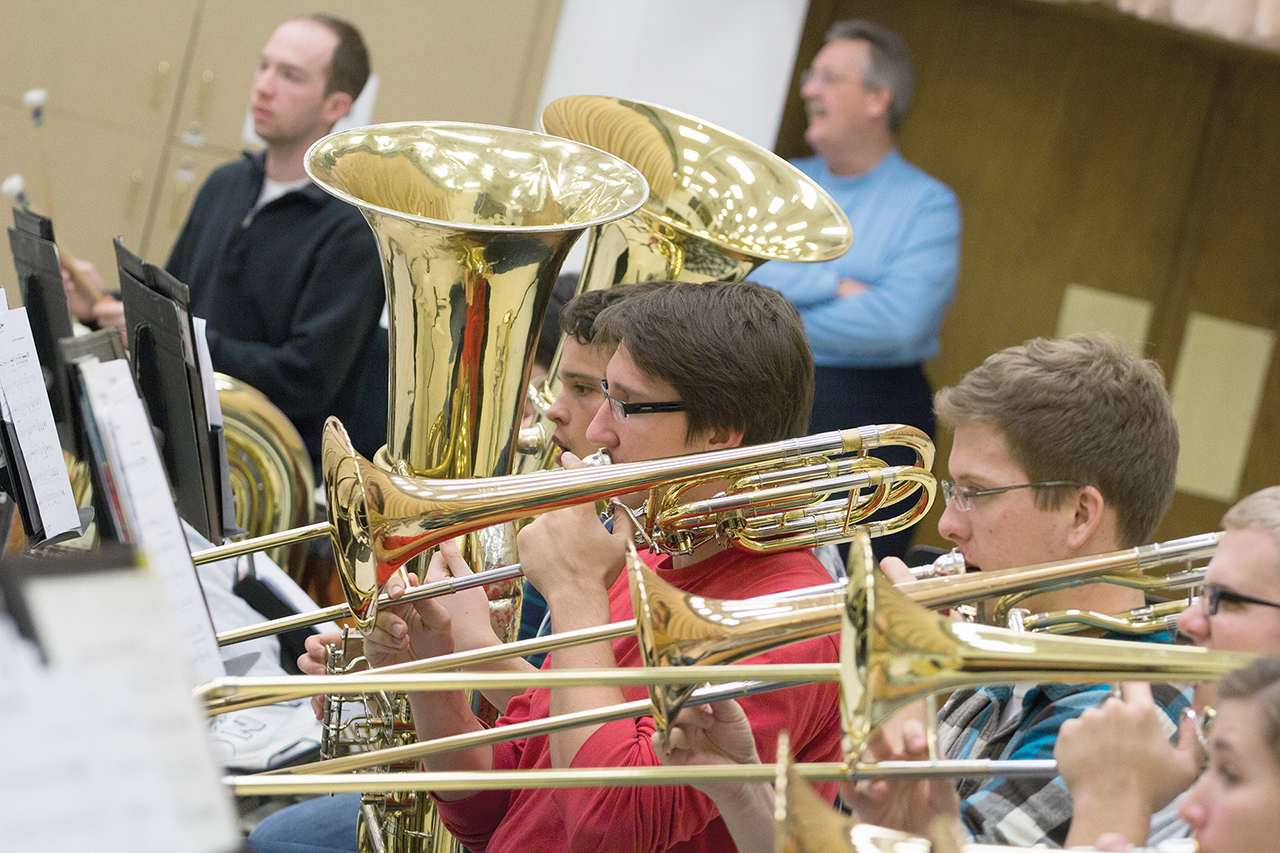 Prism, Concordia’s annual winter concert featuring wind and percussion instruments, will have a theme for the first time in its history. The Nov. 17 concert’s theme is America.

Peter Haberman, who started directing The Concordia Band last year, said he had been reflecting on his first year and deciding how to improve the music program. Some of his reflections focused on making Prism a better experience.

“I really like the energy and format and uniqueness of that concert,” Haberman said. “I don’t think it necessarily needs anything, but it feels a little potpourri. It’s kind of a mix of things.”

The Prism concert will continue in its non-traditional format in which the audience sits between four stages from which the performers will play. Each performance runs right into the next, allowing a continuous musical experience.

Haberman and Nathaniel Dickey, the Symphonic Band director, talked this summer about ways to improve Prism. They realized that the music had no general focus.

“We all did what we wanted without contacting each other,” Haberman said. “We need something that glues it together.”

Haberman believes that a theme is the solution. Director Russ Peterson, who directs multiple ensembles in the concert, agreed with Haberman’s idea.

“The theme is a great idea,” Peterson said. “Themes are always fun to make a concert cohesive.”

“(Prism) is kind of disconnected,” Dauner said. “There’s a lot of variance … (A theme) gives it a more unified feel.”

By choosing the theme America, Haberman and Dickey focused the repertoire to being written by American composers, inspired by America, being an American style of music or having some other direct connection to America.

“I think the audience will get a much more unified presence from the concert,” Haberman said.

While the concert theme will be American, Haberman said it will not consist of only recognizable American pieces. The concert will start with an arrangement of “The Stars Spangled Banner” and end with “Tis a Gift to Be Simple.” Yet some of the other American songs will be less popular or well known. For example, the flute choir will play a Native American piece.

“There’s still going to be variety in that songs won’t all be recognized as American,” Haberman said.

There is a possibility that some songs may not fit into the theme at all. Haberman and Dickey chose the theme at the beginning of the school year, yet some directors like to choose their music over the summer. By August, when the theme was announced, these directors had already chosen their repertoire and had to re-pick their music.

David Eyler, who directs percussion ensemble and marimba choir, had chosen his music already, and it did not fit the theme. He had to re-choose pieces for his ensembles to perform and was able to successfully find a piece that worked.

“Having a theme … minimizes your repertoire,” he said. “You have to be creative and think about how to make it musically work while keeping the integrity of the theme.”

Dauner sympathized with the directors in that the theme may have some negative aspects.

“It may exclude particular genres that would be more beneficial to some of the ensembles,” he said.

Haberman and Dickey tried to choose a broader theme to accommodate the ensembles due to the short notice. In the future, Haberman hopes to choose the theme as a collaborative decision among the music faculty. Doing so would allow a much narrower theme to be chosen.

Dan Anderson, a junior saxophone player, approves of having a theme, however broad it may be.

“I used to think Prism was kind of messy,” Anderson said, “but now it makes it seem like a concert with one idea. It’s always been a good experience, but I think it’ll be better for everyone who is either participating or playing.”

Dauner does not believe the concert will seem any different to him, but he does believe the theme will allow the audience to be more involved. Peterson agrees it will benefit the audience.

“I think it’s fun for the listeners,” Peterson said. “It’s a celebration.”

“An audience member will know what they’re listening to,” Eyler said.

The Prism concert will be held at 4 p.m. on Nov. 17 in Memorial Auditorium.