By: Meg Hanna
In: Blogs, Reviews
Tagged: Thor: The Dark World
With: 0 Comments 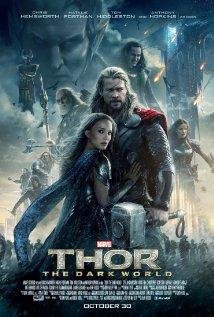 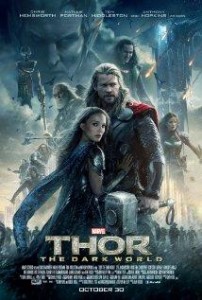 On Thursday night I went to see Thor: The Dark World.  As a complete Marvel fan girl, I had been really excited for this movie ever since seeing the original two years ago.  After seeing The Avengers, I grew even more impatient for the next installment in Thor’s story.  So, as you can imagine, my expectations were pretty high. The Dark World did not disappoint.

The thing about superhero movies is that they are hard to describe without sounding a little bit crazy, so you might have to bear with me a little bit.  In Thor’s last adventure, he was helping the other Avengers to save New York from his “evil” step-brother Loki.  Disappointingly, we did not see Jane Foster (Natalie Portman), Thor’s love interest from the original film in The Avengers.  They are reunited in The Dark World, though under some very strange circumstances.  Jane has found herself the unwilling host of a semi-sentient dark entity known as “the aether” and the target of an evil creature determined to use the aether’s power to destroy the universe.  Thor and Loki must team up to save Jane, along with the rest of the universe, from the aether and the creatures who would harness its power.

As in previous films, the on-screen chemistry between Chris Hemsworth and Tom Hiddleston is amazing.  They really capture a sibling dynamic through their delivery of hilarious one-liners, incessant bickering, and their portrayal of a never-failing loyalty to one another, in spite of their rocky history.  Much to my surprise, I enjoyed Loki’s character more than Thor’s in this film. He had both the funniest and saddest moments in the script, and Hiddleston seemed to portray more depth of character than Hemsworth did.

The Dark World did not ignore the events of The Avengers, which I appreciated.  There were realistic consequences as a result of the battle in New York.  Thor and Loki’s relationship was negatively impacted because of it and we see Dr. Erik Selvig struggling to cope with the role he played in the battle.  It would have been easy to pass the two films off as parts of two separate series, but the writers really went the extra mile to provide a sense of continuity.  That should not go unnoticed.

One thing that did bother me was the way Jane’s character was portrayed during most of the film.  In Thor, she was a heroine apart from Thor.  In fact, she and her crew did most of the actual day-saving in that film.  In The Dark World, however, she plays the role of “damsel in distress” for all but the last half hour of the movie.  It was a little sad to see her character so undeveloped in this movie.  Her one redeeming scene happens when she meets Loki and promptly punches him in the face.

Unsurprisingly, there is a huge twist at the end – it is a Marvel movie after all.  I won’t give any spoilers, but both the final scene of the movie and the post-credits scene provide a great set-up for the next installment.  The post-credit scene ended simply with “Thor will return” but did not specify when or where.  Though that was left ambiguous, it’s a pretty safe bet that we will see Thor next in The Avengers 2 in 2015.

The Dark World is currently playing at both West Acres and Century 10 in Fargo.  I saw it at Century 10, and was pleasantly surprised to learn that they offer $5 student tickets and free small popcorn included every Thursday!  I had never heard of that before, but apparently West Acres offers the same deal.  So even if you don’t see The Dark World, you should definitely take advantage of that awesome deal.  But seriously though – if you’re even a little bit interested in the Marvel movies, go see The Dark World.