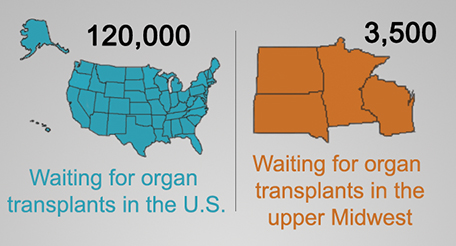 Tri-College Public Relations students are working with local nonprofit Alexa’s Hope to break the Guinness World Record for most organ donors registered in an eight-hour period. The event is entitled the “#GivetoLive Challenge.”

Alexa’s Hope and the PR students are attempting to break the world record in order to raise awareness about organ donation.

Donor registration will occur at the Fargodome, the Fargo Air Museum and the Fargo Coliseum this Saturday from 9 a.m. to 5 p.m.

Alexa’s Hope was founded by a member of Concordia’s counseling staff, Monica Kersting, who enlisted the help of MSUM’s student-run PR firm, Positive Reactions, to aid with the event’s planning, promotion and execution.

MSUM student Blake Loyland, who works for Positive Reactions, got involved with the event early on and later enlisted Concordia and NDSU’s PR organizations to help.

“The current record is 4,135 (donors registered), so we’re trying to break that,” Loyland said.

The current record is held by an Indian university and “pretty much doubled” the previous record, which was held in Illinois. Kersting says she is “really optimistic” about the organization’s ability to break the record, even in a significantly less-populous area than India.

“What you really need is more of a population with huge hearts,” Kersting said. “And the reason I say that is some of the least populated states have some of the highest numbers of registered organ donors.”

The president of Concordia’s PR Club, Michael Chambers, emphasized that the issue this event is trying to address tends to be overlooked.

“You (only) think about (organ donation) when you’re signing up for your license or when you’re getting it renewed,” Chambers said.

The three locations chosen for the event are all within a half mile of one another, per the requirements of Guinness. The Fargodome in particular was selected because it will already provide a “captive audience,” according to Kersting.

“It’s the last Bison home game of the year,” Loyland said. “So there will already be a lot of people there.”

Much of the work Concordia’s PR group will be doing is promotional, including two days of tabling in the Atrium in Knutson.

“It’s a lot of … publicity stuff,” Chambers said. “And a lot of just connecting and networking and reaching out to people.”

Those wishing to register as donors at the drive must be at least 18 years of age and
must be able to present a valid driver’s license or picture ID.

People already registered as donors in the state of North Dakota are not allowed to register at the event, but people registered in other states are able to register.

Chambers had a very simple rationale for why people ought to register their organs for use after death.

“You’re not gonna be using them at that time,” he said, “as morbid as that sounds.”