By: Ivy Estenson
In: Blogs, Reviews
With: 0 Comments 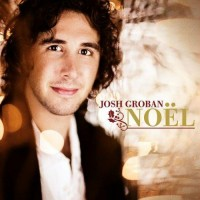 December has begun and Thanksgiving came obscenely late this year, leaving only twenty-seven days to fit in all of the cookie-baking, caroling, snowman-making, shopping, and Elf-watching that must be done before December 26th. For students, there hardly seems like there’s time to do any of these things in between studying for finals.  That’s why, after Thanksgiving, all of my homework is done with Christmas carols playing in the background. One album that seems to always make its return each year is Josh Groban’s, Noël.

Noël was released on October 9th, 2007. I know I may be a little outdated, but when it comes to Christmas albums, some are so good that they just become a tradition. I find no appeal in flashy renditions done by artists who are just trying to outdo the last cover of that song. I realize this makes me sound like a Christmas music hipster but I appreciate Christmas carols that still sound like the original. Noël does just that.

Groban assembled thirteen both classical and contemporary songs that epitomize the spirit of Christmas. He begins with Silent Night, which starts off simply and then incorporates a children’s chorus. At times the contribution by children’s chorus is a little shrill and distracts from the rest of the song. Nevertheless, the harmonies are to die for, and the entire song is just a euphoric outburst of Christmas joy, made possible by Groban’s rich tenor voice. Another amazing track is Ave Maria which takes a popular choral arrangement and strips it down to its core, while still remaining as powerful as the original rendition.

I especially love when Groban pairs up with other artists such as Faith Hill, the Mormon Tabernacle Choir, and Brian McKnight to create striking harmonies between two powerful voices that strangely do not overpower each other. For example, in The First Noel, a duet with Faith Hill, two incredibly strong voices come together in a way that enhances the others’ talent. The song begins simply and builds in a way that will give anyone chills. Their take on this relatively static song makes it so much more interesting to listen to while still keeping the integrity of the original.

I am sure there are dozens of more recent Christmas albums that spread just as much cheer as the three or four albums I have on repeat, but with such a small window of time in which it is socially acceptable to listen to Christmas music, I’m going to keep playing Josh Groban’s Noël. In my book, it counts as a classic.

You can listen to Noël for free on Spotify, or purchase it online.