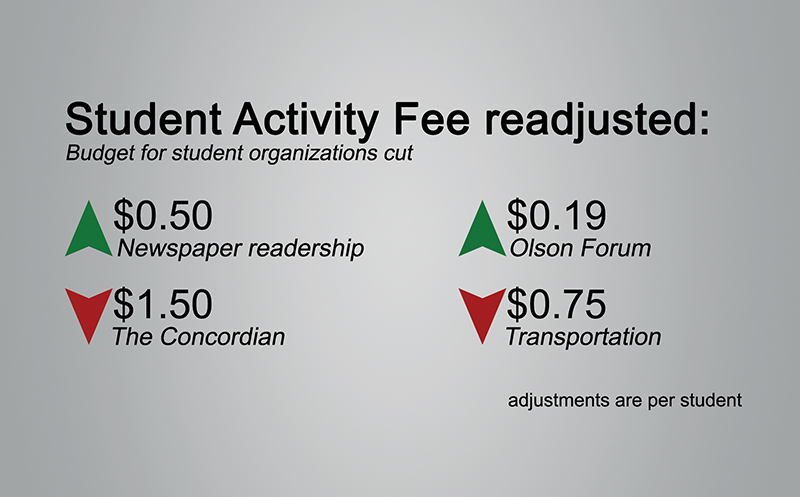 Thursday, Student Government Association will present their 2014-2015 student activity fee proposal to the Budget Planning Committee. If the proposal is passed, budget cuts will be made to some campus organizations because of income projections for the upcoming year.

The SAF is a portion of tuition that goes toward funding student organizations and events on campus.

Sue Oatey, vice president and dean of student affairs, and Linda Brown, vice president for finance, forecasted that there will be more than 2,400 students paying the SAF in 2014-2015. Based on this number, the SGA executive team shaped the proposed budget for the year.

This number does not reflect next year’s student enrollment; it is simply the projection of how many students will be paying the SAF as a part of their tuition, according to SGA president Levi Bachmeier.

The Concordian will see a reduction of $1.50 per student and transportation a reduction of 75 cents. Newspaper readership, which provides state and national newspapers for free to students at Concordia, will get an auto-disbursement increase of 50 cents and Olson Forum an increase of 19 cents.

Chelle Lyons Hanson, faculty advisor of SGA, said the organization took a harder look this year at areas where money could be allocated differently.

They asked themselves the question: “Does the allocation reflect the best interest of the students?” she said.
SGA provided rationale for the changes made to the auto-disbursements.

The reduction to the Concordian’s budget, going from $12 per student to $10.50, is in response to the large reserve fund the Concordian has accumulated over the past few years. The fund, which is more than 100 percent of the proposed yearly budget, is too high, Bachmeier said. According to Concordia CFO Linda Brown, he added, a reserve fund should only be 10 percent of an organization’s yearly budget.

SGA is also proposing to discontinue the Doyle’s Cab service due to inconsistent usage. This would result in a 75 cent reduction to the amount of money allocated for transportation and allow the funds be used elsewhere.

The addition to the newspaper readership program is meant to balance out a drastic reduction that was made last year. A 19 cent addition to the allocations for Olson Forum will make accounting easier, bringing the amount from an awkward $5.56 to $5.75 per student.

Despite the cuts SGA is proposing, Campus Service Commision will see a budget increase for the upcoming year.

The CSC program director, group projects coordinator and public relations coordinator positions are currently unpaid positions. Under the new proposal, stipends will be created to reimburse students for their work in these positions.

Although CSC will be granted this addition under the proposal, Bachmeier said, they will receive less funding than they originally requested, because SGA could not allocate more without making cuts in other areas.

“That’s kind of the nature of the game,” he said.

SGA vice president Matt Dymoke, who has also served on the Student Involvement Council the past three years, has seen large decreases in funds for SIC to allocate to smaller student organizations. He said this was his largest concern as SGA drafted the proposal.

“I want student organizations to continue what they’re doing,” he said.

Due to the decrease in the number of students projected to pay the SAF next year, Dymoke said SIC will get less funding.

The SGA executive team, along with other members, have spent time this semester assessing the allocations from the SAF. By making adjustments in the allocations to different campus programs and organizations, SGA is proposing to keep the SAF at $214, the same amount it was for the 2013-2014 school year.

Bachmeier said a considerable amount of research went into drafting the proposal. The SGA executive team, along with other members of SGA, met with different stakeholders of the SAF and advisors of various student organizations.

“We went through that process to get a better understanding of where those organizations were at financially,” he said.

“I think it’s one of the hardest things when you are grappling with the problem of who gets how much,” she said.

Lyons Hanson said it would be impossible to reduce the SAF without making unwanted cuts to valuable programs.

“I think it would mean some hard choices,” she said. “Could we allocate less? Yes, but it would also mean student organizations would have fewer options.”

Bachmeier said the proposal was six weeks in the making by the time it went to Student Affairs Tuesday, Nov. 19. At the meeting, the proposal was vetted, and SGA received suggestions to help prepare for their presentation to the Budget Planning Committee.

Thursday, Dec. 5, SGA will present their 2014-2015 SAF budget to Budget Planning, which is a committee of faculty members, staff and students.

Oatey said the proposal is well thought out and provides good rationales for the changes.

“I think it stands a very good chance of being accepted (at Budget Planning),” she said.

Given the smaller numbers in enrollment, Oatey said next year will be a bridge year for Concordia, and adjustments in funds have to be made to accommodate for that.

“I think all of us can tighten our belts for a year,” she said.