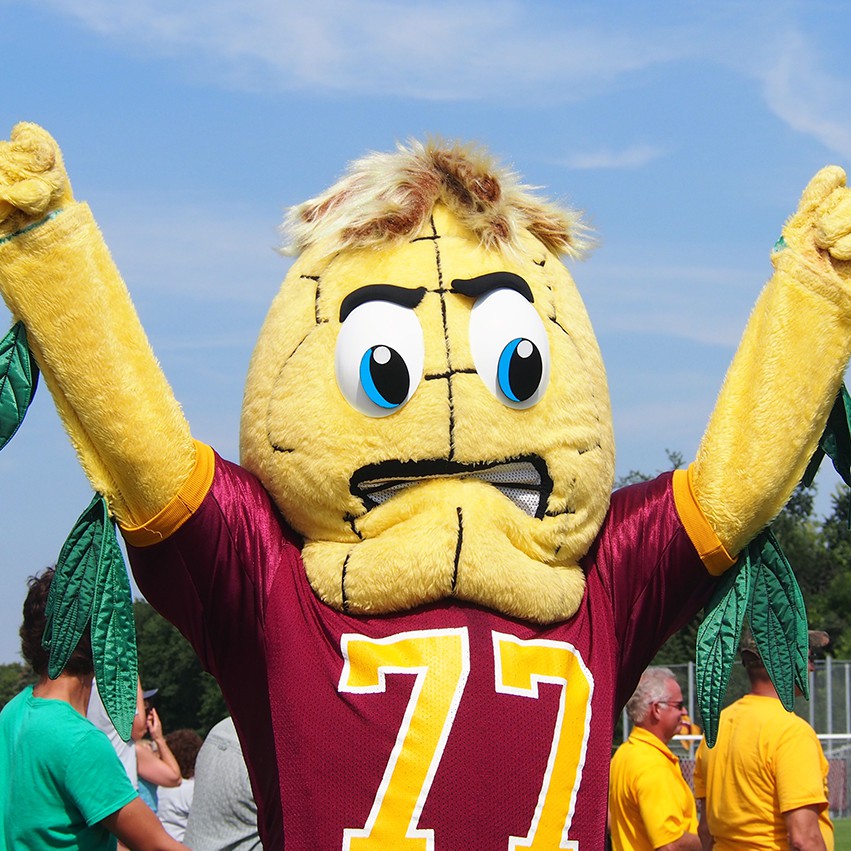 From being present for sporting events, homecoming weekend, family weekend and various activities throughout the year, Kernel Cobb has become a Concordia tradition.

Where does all that energy and spunk come from? Fellow Cobbers, of course. Through their dedication and non-stop attendance, Kernel Cobb has become the life of the party during Concordia events.

When sophomore Tara Anderson was looking for an on-campus job, she went to the career center and began flipping through pamphlets. After looking at a few, Anderson discovered there was an opening to be the school’s mascot.

“I emailed the career center to get an application but didn’t hear back (for a while),” Anderson said.

After receiving a response from Linda Lyman, Anderson prepared for her interview.

“I brought all my spirit stuff, thinking it would be a mascot,” Anderson said. “I got ready for a typical interview and then (after the interview) they sent me off to be the mascot.”

Senior Jeff Hale has been a Kernel since the spring of his freshman year.

“I was the only one that could do it at the time,” Hale said. “Taylor Comstock was one of the first guys I knew that was Kernel. Being able to take over his role after he left was special.”

Prior to being put in the suit for events, students have to adjust their daily routine so they are physically prepared.

According to Anderson, student Kernels are even given a manual to follow.

Students are required to drink water, have potassium and refrain from eating salty foods the day before and the day of wearing the suit.

With the help of his spotter, Hale become acquainted with suit.

Throughout Silver’s time as student director, Kernel has engaged in helping her direct.

“There are times he copies the director,” Silvers said. “He also comes around our area.”

While in the suit, Hale enjoys engaging with individuals to make them more comfortable.

“I like to come up and tap people on the shoulder,” Hale said. “Shy people are fun to mess with; I like to make them more comfy.”

During Anderson’s time as a mascot, she has brought on the Cobber spirit during family weekend, basketball games and has also met fellow mascots.

“During a Fargo Force game, I met some other mascots from MSUM, NDSU and the Viking’s mascot,” Anderson said. “(While at the game) we had to go out on the ice and skate around; I ran into the glass and fell.”

Everyone loves to take photos with Kernel. Out of habit, Hale finds it hard not to smile while dressed as Kernel.

“You always find yourself smiling in the photos, even though you don’t have to,” Hale said.

No matter who is in the Kernel suit, their presence at athletic events, family weekend events and throughout homecoming week, non-stop Cobber spirit is expressed.

Though each event enables Kernel to express his or her spirit in different ways, Kernel’s main mission is to make sure all attendees have fun.

“(Kernel knows how to) be the life of the party,” Anderson said.