Too Much Stuff Week promotes discussion of consumption

By: Contributing Writer
In: Campus, Community, News
Tagged: overconsumption, Sustainability, Too Much Stuff Week
With: 0 Comments 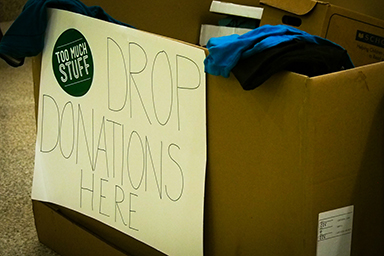 Conversations surrounding sustainability around campus are nothing new. However, sociology professor Andrew Lindner’s Political Sociology class has focused on a different spin of sustainability that nearly everyone is guilty of: having too much stuff.

The class has just wrapped up their Too Much Stuff Week project, which included a clothing drive and a viewing and discussion of a video talking about overconsumption.

The class raised approximately 1,500 clothing items to be donated to the New Life Center of Fargo. The shelter has an adjoining thrift store. The homeless are able to shop for free, and all proceeds from sales go to offset the costs of the shelter, according to Emma Connel, a senior and member of the class.

Senior Cathryn Erbele said this project allowed for sustainability to be brought more into everyday life and to be more accessible to everyone.

“I could go out and reduce my consumption,” Erbele said. “I could say no to things at Target. I could tell myself that I don’t need it.”

Erbele said that telling people about little changes they can make is a lot more effective than just throwing information at them.

“It’s not an easy thing to do. It’s hard to take a look at consumption habits and say, ‘Wow, I don’t need to be doing this.’ It gives people a really concrete thing they can do in a concrete way that they can do in their everyday life,” Erbele said.

Connell agreed with Erbele. She saw how unsustainable it is for these products to exist in the first place, from production, to shipping, to the sales.

“There are a lot of societal issues that are reflected in the amount of clothes we have. It’s a problem, and it’s a problem that’s happening on campus, and it’s something that we can do something about,” Connell said.

The class also took the needs of the community into consideration when brainstorming this project. Connell said they thought about what the community needs this time of year and what can be done to help.

“A lot of the homeless population just doesn’t have enough clothing, so they can’t keep warm. So many of us in the class have so much, while there are people in the community who have frozen on the steps of a local church,” Connell said.

Another point Connell stressed was the importance of involvement on campus in this project.

“In general, just being able to be on campus here and being able to get an education makes us privileged. We are in a privileged place to give back,” Connell said. “We can all be a part of the solution.”

Connell said the video and discussion later in the week would create a platform for more dialogue about sustainability and how our society lives off consumption.

“Sustainability can be a little overplayed, and a lot of people are getting frustrated with it, so I want to make sure we’re having a frank and honest discussion about how we feel about it.”

The video they showed, “Story of Stuff,” takes viewers from production to landfill with most of the items we consume on a daily basis, and it discusses the repercussions of that consumption.

Erbele saw the video as a good opportunity to begin more discussion about consumption on campus.

“Consumption should be more of a thing we talk about. We should bring more speakers to campus that can tell us about concrete things we can do,” Erbele said.

Connell sees the overconsumption issue as something bigger than just a class project in college.

This article was written by Michael Chambers, contributing writer